I am trying to understand the parameters of ferrite beads and having trouble in understanding the impedance vs frequency parameter.

What does 100Ohm at 100MHz exactly mean? Does it mean that the bead will provide impedance of 100Ohm for frequencies in the 100MHz region (depending on its graph)?

I do understand that bead is highly resistive at higher frequencies.

Any help will be appreciable.

Here's a graph of the impedance vs frequency behavior of a "randomly" selected SMT ferrite bead inductor: 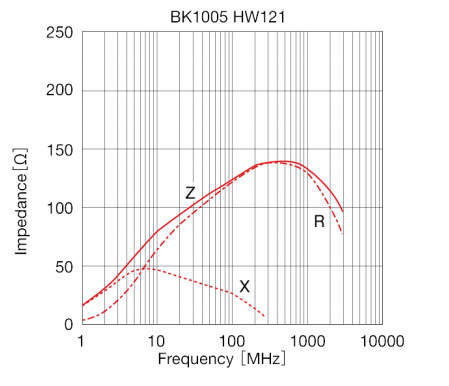 You can see that the impedance of the component varies widely over frequency.

Also, the real part of the impedance (R) dominates the behavior over most of the frequency range, and the imaginary part (reactance, X) dominates only at relatively low frequencies.

When the datasheet tells you the impedance is 100 ohms at 100 MHz, that is just giving you just one point on this curve. It's technically only telling you the magnitude of the total impedance, but in most cases this will be almost entirely real impedance (resistance).

The device I showed the plot of has a listed typical impedance of 120 ohms at 100 MHz, which you can see agrees with just that one place on the curve.

Some devices might still be increasing in impedance at 100 MHz (like this one), while others could be already past their peak and in the declining part of the curve (as happens above about 1000 MHz in my example part).

Not the answer you're looking for? Browse other questions tagged frequency impedance ferrite-bead ferrite or ask your own question.

1
SMD ferrite beads - DC current rating
4
Ferrite Beads Design
2
Ferrite Bead: How much impedance do I need?
1
Why do some computer power cables not have ferrite beads? What type is usually used?
1
How similar are ferrite beads with same dimensions, only differing in material?
3
Placement and values for ferrite bead/capacitor ESD protection / transient suppression filter
0
R-Cd parallel damping during power on
2
What types of cables do ferrite beads/chokes have a beneficial effect on?