Is the supply for a differential op amp compulsory?

Is the supply for a differential op amp compulsory or can we operate those without a supply? I just want to amplify the difference of inputs, I'm not in need of any supply voltage.

Is the supply for a differential op amp compulsory or
can we operate those without a supply?
I just want to amplify the difference of inputs, I'm not in need of any supply voltage.

You ask specifically about an "op amp" = "operational amplifier".
Using the Wikipedia definition this is necessarily a powered device with high gain, and it would be difficult to build one that did not require power supply separate from the input signal. While it is conceptually possible to imagine an amplifier which derives power from its input signals and amplifies eg voltage but at reduced power level, this would be extremely unusual, would have significant limitations in what it could do and would usually be more an exercise in perversity than a useful device.

In the general case the answer is short - see below.

Most of the material below relates to special cases - in the "special cases" section below I describe devices which break the general "rule".

In the general case, the answer is no.

An opamp without a supply is like a car without a motor. *
It can't do anything, it won't go anywhere and it has absolutely no power output.

So, no, you MUST power an opamp to allow it to amplify signals.

How you power it MAY be creative, although you need to know what you are doing to have any chance if success. ie in SOME cases you may be able to obtain power for an opamp or other IC from portions of your circuit that are not formal power supplies. But, you are still supplying it with power and it is necessary to do so.

Very specialised subsets of amplifiers exist which can be powered by their input and so do not need separate power supplies. These cannot be power amplifiers but can amplify eg voltage or current.

For example, if you want an AC amplifier and are prepared to accept certain significant limitations then you can describe eg a transformer with a step up voltage ratio as an amplifier, and it will not require any external power supplies. eg a 110 VAC to 230 VAC step up transformer can be used in the USA by visitors from eg Britain or NZ to operate 230 VAC equipment from US 110 VAC mains. This transformer IS a voltage amplifier with a gain of ABOUT 230/110 =~~ 2.091. It has a current gain of less than 1 (approximately 1/2.091 ~= 0.478 and is somewhat lossy for power as some of the input power is lost in the windings and laminations.

This is a real amplifier in that if you decreased or increased the input voltage by a limited percentage of its initial value the output voltage would decrease or increase by about the same amount. I say "about" as things like magnetisation current and 'matching' of input and load will mean that the Vout/Vin voltage ratio is somewhat dependant than more than just the transformer turns ratio. However, to a first approximation it functions as a voltage amplifier.

In the diagram below we have two "gain blocks".
In the upper block we have a transformer with a 1:3 turns ratio.
In the bottom gain block we have unknown circuitry.
In both cases, for a range of frequencies and loads and certain other conditions, Vout ~= 3 x Vin in both cases. If Vout/Vin = voltage gain is the only aspect which is of interest to us then the transformer can be considered to be "amplifying" the voltage. The transformer is, for the parameters of interest, not functionally different to a "formal" amplifier. 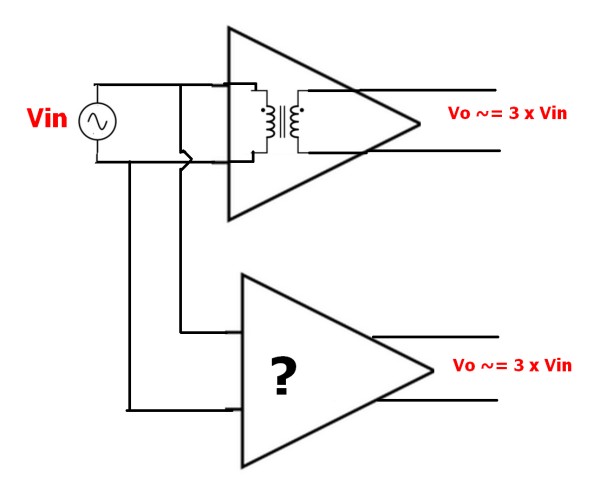 An unusual device does exist which uses"magnetics" (eg windings on a 'steel' core or cores) + external power input to provide overall power gain. The device may use multiple semi independent windings and not be a true transformer or may incorporate true transformer action as part of its operation. Such a device is commonly called a "magnetic amplifier". It works by making use of the non linear magnetic saturation aspects of the magnetic core material and uses a low power signal to change the degree of magnetic saturation in a core shared by a high power winding. The change in core saturation produces an impedance swing in the high power winding which produces changes in power level much greater that what is required to cause them.
See section at end - "Powered transformers and magnetic amplifiers".

The website of the person who designs these amplifiers, an IEE member, makes interesting reading. Their comments and terminology leave no doubt about what they think about provision of voltage gain without powering.
[Susan Parker, MIEE, Zeus Power Amplifier - A Zero Feedback Power Amplifier, for Audio and Other Applications.

Susan's Audiophonics site.
She says - "I use transformers by design as the primary building blocks and gain stages
and either tube or solid state devices as followers. This topology is further explained on this site."

Zeus Power Amplifier - note that the two MOSFETs are voltage followers with a voltage gain of less than unity.

However, there is no reason that a transformer cannot if desired be provided with a power supply so that "magnetics" are used to manipulate energy flows.
In such cases the "powered magnetic device" can have both voltage and power gain - so much so that when this arrangement is used the term "transformer" is replaced by the term "magnetic amplifier".

A magnetic amplifier is a specially designed transformer (or electromagnetic device consisting of windings on a (usually) steel core, with a DC power supply that can be used to provide voltage and or power gain. There are variants on this theme with small level DC controlling higher power AC, AC signals producing AC power out (functionally essentially indistinguishable from an AC amplifier implemented by other means) and more.

Magnetic amplifiers often use a slowly varying DC signal to vary the power of an AC signal, but may be and are used as true AC in AC out "powered" amplifiers.

From whence this image (and many like unto it) 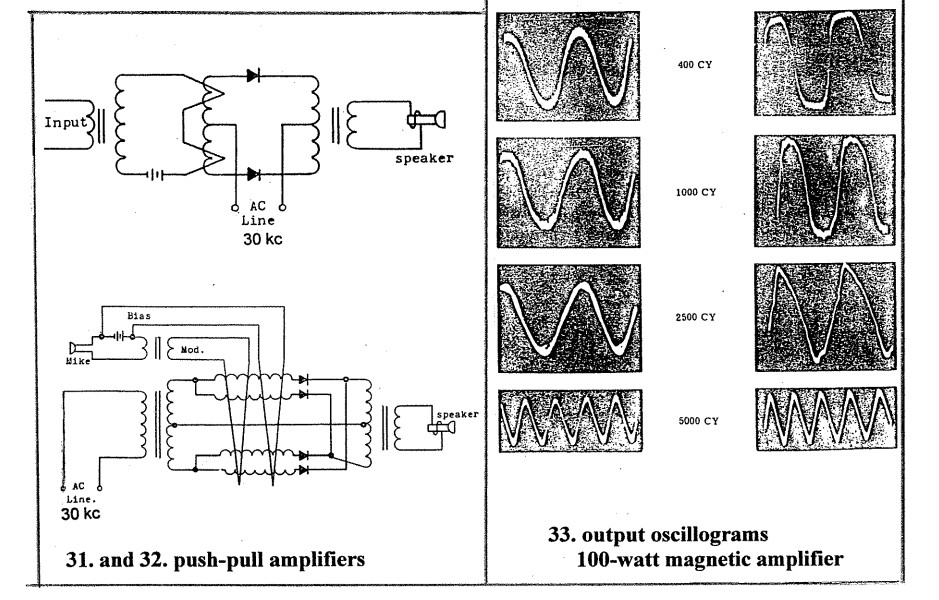 I just want to amplify the difference of inputs

From the Wikipedia article "Amplifier"

Thus, the need for a power supply to the op-amp. The additional power of the amplified signal must come from somewhere since energy is conserved thus, power must be supplied to the op-amp in addition to the signals to be amplified.

A transformer can be used to increase the voltage of a signal (the secondary voltage can be a multiple of the primary voltage) but not the power of a signal (ideally, power in equals power out) so it isn't an amplifier and, thus, doesn't require a power supply.

Not the answer you're looking for? Browse other questions tagged differential instrumentation-amplifier or ask your own question.

9
Controlling a current with another - home-made alternatives to the transistor?