Please help me to find the answer for the following question from Flyod 9th Ed.

Determine the voltage across the diode in the following figure, using the complete diode model with r'd = 10 Ohms and r'R = 100 Ohms. 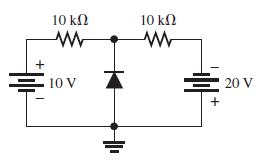 Since the lower point is grounded, voltage at upper node is -10 V. Hence diode is forward biased. Then in complete diode model we can consider the diode as a closed switch with a DC source and resister inside.

Is this explanation is right and if so how may I proceed from here?

As Spehro said, I would prefer combining the 2 sources and resistors into a single one. This can be done by noting that the two sources + resistances are in parallel branches.

The formula for equivalent Voltage in parallel branches is

The equivalent resistance is then given by

Using the above formulas, your circuit would be a single voltage + resistance branch and a diode.

I don't know what the complete diode model you refer to is, but for an ideal diode:

Consider the circuit without the diode. What is the voltage between the resistors? 15V falls across each resistor, so it will be 10-15 = -5 volts. So when we add the diode back into the circuit it will be forward biased (or "on") and the cathode will move to just below zero volts: about -0.6V or -0.7V in practise.

Of course you probably still need to do it mathematically using your diode model, for an exact answer.

I wanted to comment to Spehro, (But I lack in reputation.)

As a first pass guess, assume Vdiode ~ zero.
Then there is 1 mA into the diode node from the 10 V supply and 2mA drawn from the 20V supply.
So there's something like 1mA going through the diode. In practice that would be enough. For your class you'll have to work out the "exact" answer. (for whatever diode model you are using.)

Not the answer you're looking for? Browse other questions tagged dc diodes or ask your own question.

1
How do I calculate voltage using the complete diode method?

1
Diode circuit simulation producing strange results
1
Silicon Diode problems
0
Question about fly-back diode
1
Output of diode clamper circuit for a sinusoidal wave input
1
How do I calculate voltage using the complete diode method?
2
How does this clamper circuit work?
2
Is the current flow through the diode carried out by both holes and electrons?
0
Confusion regarding diode rectification circuit graph
0
Meaning of discontinuity in a diode circuit, analyzed using a simplified model for the diode
0
Puzzled with parallel forward biased diodes with common anode and different cathode voltages