What's the maximum CAN bus frame (message) rate at 125 kbit/s?

My CAN bus is running at 125 kbit/s and is using extended frame format exclusively. I would like to know what's the maximum rate of CAN frame I can send out. Suppose the data length is always eight bytes. 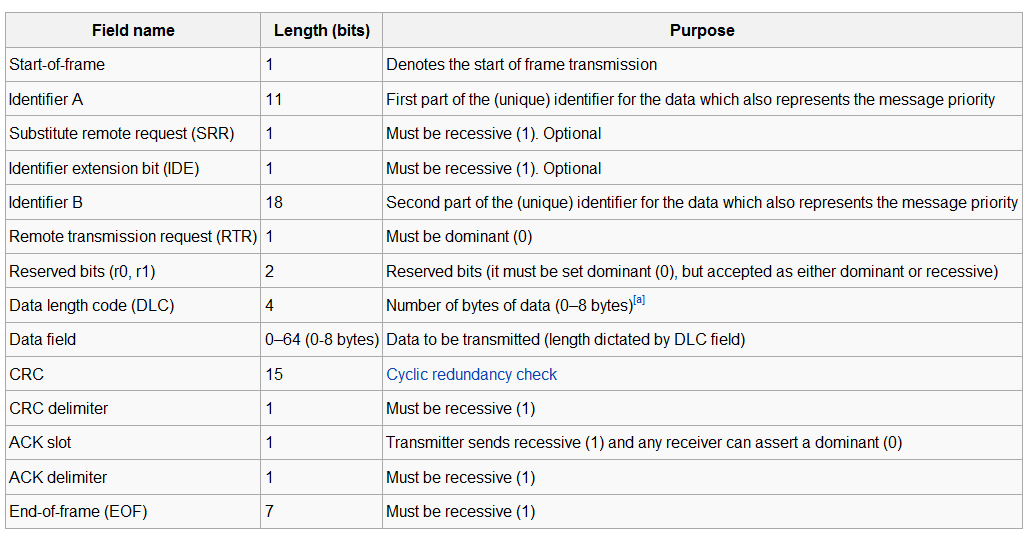 But in my test, I couldn't get that high. The maximum frame rate I can achieve (with all eight bytes data) is around 850 frames per second.

What's wrong here - my calculation, or my test method?

CAN uses NRZ coding, and is therefor not happy with long runs of ones or zeroes (It loses track of where the clock edges ought to be). It solves this potential problem by bit-stuffing. When transmitting, if it encounters a run of 5 successive ones or zeros it inserts a bit of the other polarity, and when receiving, if it encounters 5 successive ones or zeroes it ignores the subsequent bit (unless the bit is the same as the previous bits, in which case it issues an error flag).

If you are sending all zeroes or all ones for your test data, a string of 64 identical bits will result in the insertion of 12 stuffed bits. This will increase total frame length to 140 bits, with a best-case frame rate of 874 frames / sec. If the data bits are the same as the MSB of the CRC, you'll get another stuffed bit there, and the frame rate drops to 868 frames/ sec. If the CRC has long runs of ones or zeroes, that will reduce the frame rate even further. The same consideration applies to your identifiers.

A total of 16 stuffed bits will produce an ideal frame rate of 850.3 frames/sec, so you ought to consider it. A quick test would be to use test data with alternating bits, and see what happens to your frame rate.

And that's also assuming your wiring is perfect. Is your can bus made from 120ohm UTP cable and capacitively decoupled at both ends? Or some random wire with a 120ohm resistor across one end?

Overall I would say you're doing pretty well to get 90% of theoretical maximum throughput.

Olin is right on with his description of bit stuffing and how that can adversely affect theoretical CAN throughput. One other thing that can further degrade actual throughput from theoretical is latency. Even if your CAN controller is able to achieve 100% bus utilization, the host processor may not be able to handle Tx and/or Rx at that rate. This could be the result of a slow processor and/or inefficient firmware that implements the CAN stack.

Another interesting question from the perspective of a receiver would be

For this case stuff bits can be likely ignored, since they make the frequency lower.

For data lenght 1 you would have to calculate with

Not the answer you're looking for? Browse other questions tagged communication can speed or ask your own question.

53
Why are USB devices slower than 480 MBit/s
2
CAN module in STM32F207 - continuously transmitting the same message
5
Is the CAN bus protocol a master and slave protocol?
1
Can I connect a CAN node with 250 kbit/s to a CAN bus running at 500 kbit/s?
2
CAN FD bit stuffing
2
Decoding message data on this CAN bus
3
How to ensure all nodes on CAN bus have received the message
1
Strange behavior of auto retransmission on STM32 CAN bus