Why do current transformers have a minimum frequency rating?

Datasheets of current transformers usually specify a working frequency range. In other words, they specify a minimum and maximum frequency for normal operation.

I understand that the core losses grow exponentially with frequency. So the datasheets give an upper limit for frequency. But, why is there a lower frequency limit? What happens when we apply an AC current to the input of a current transformer with a frequency lower than the rated minimum frequency?

For a voltage transformer: -

If the applied voltage were very low in frequency i.e. 0.1 Hz, the primary current taken (if the voltage were 120 VAC or 230 VAC) would be several tens of amps and the winding would fry and burn. Nonetheless, what about trying it at 1 VAC? Now, the current (remember we're talking 0.1 Hz) is a couple of hundred milliamps (that's OK) and the flux is just about avoiding saturation (phew) but, a decent flux rate of change is needed to produce the requisite voltage in the secondary and at 0.1 Hz it isn't changing that quick so you get a really small output. No big deal: output voltage and input voltage are still approximately related by the turns ratio but you can't connect to live and neutral anymore because it'll burn.

At some point above (maybe) 35 Hz, you can run full voltage.

Primary current is always defined by the "external circuit" - that's good because now we don't need to worry about saturation or the current getting bigger at lower frequencies. Normally the current transformer has a burden resistor of 1 to 100 ohms and this totally swamps the magnetization impedance; consider, at 50 Hz the mag inductance is 10 uH - this has a reactance of 3.14 milliohms.

If the burden is (say) 10 ohms and the winding ratio is 1:200, referred to the primary, 10 ohms is 40,000 times smaller at 250 micro ohms. The magnetization inductive reactance (3 milliohms) is now swamped by the primary-referred burden of 250 micro ohms. This is what we want - we want the majority of the primary current to pass through the burden via the turns ratio.

At 5 Hz, the burden is still 250 micro ohms but now the magnetization reactance has dropped to 300 micro ohms - see how things are changing - what this means is that the CT at low frequencies can no-longer sustain the maths that underpins it. At 0.5 Hz the output will be negligible because the primary referred burden resistance is totally swamped by the extremely small magnetization impedance.

Equivalent circuits of VT and CT 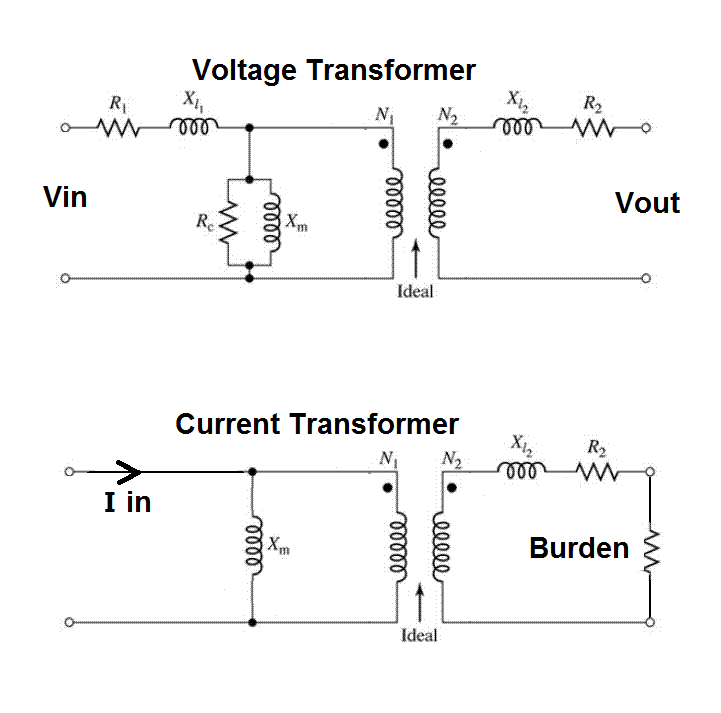 Comparing CT with VT, you can forget about the primary DC resistance, leakage inductance and core losses (mainly) - all you have is a fat wire (carrying current) going through a hole - it generates some magnetism due to Xm. If the secondary leakage impedances are small compared to the burden, then you can usually forget Xm as well.

What remains is the burden (transformed and transferred to the primary). It is in parallel with Xm and, the burden should normally dominate i.e. it is the lowest impedance because of turns-ratio-squared. So, the majority of the primary current is used to feed current through the burden on the secondary and a small amount of this current (flowing through Xm) generates a by-product called magnetism. The relatively small amount of current that generates magnetism is usually well-below the current that would cause core saturation.

Non-superconducting current transformers have a rolloff below a certain frequency, so the output for a given current simply goes down as the frequency decreases. It's not core saturation nor is it directly related to the inductance- this is a linear effect.

The -3dB rolloff frequency is determined from L/R where L is the inductance of the transformer secondary and R is the resistance of the secondary circuit.

Take the case of the B82801B0504A050, which has a recommended 50R load and inductance of 500uH looking into the secondary. The L/R constant is 10usec, corresponding to a -3dB frequency of 16kHz. So the error at the rated 50kHz should be minimal.

Not the answer you're looking for? Browse other questions tagged current-transformer cutoff-frequency or ask your own question.