Software engineer with a hobbyist understanding of EE here.

I've noticed lately lots of claims from producers of USB battery packs that their ports are "smart" and "identify the device" to "deliver the maximum current for the device." A cursory look into the matter seems to imply that this isn't completely marketing language, and there is actually something more complicated going on.

Not understanding the subtle chemistry of lithium-ion batteries or the nature of charge controllers, I would guess that to charge a battery as quickly as possible, you would draw as much current as possible, limiting it only to the battery specs. This must not be the case, since it is documented that devices limit their charging to 1A in some cases, when surely they could draw more. Why is this?

If the current draw is so controlled, what's going on with these smart ports to enable the device to draw more current? From a product page for an Anker battery, they claim their ports identify the device and "speak its unique charging language" (that phrasing makes me nauseous). Maybe I shouldn't react so harshly to that phrasing though - are the USB data lines actually used to negotiate some charging pattern?

There are two additions to the USB specification that allow for more than 500mA current.

usb battery charging specification 1.1. Allows for up to 1.3A.

usb battery charging specification 1.2 (and this). Allows for up to 5A.

More can be found here

In practice, 'smart' chargers use a special chip called a Dedicated Charge Port Controller. A DCP controller can act like different chargers, and picks the mode which seems to work best.

That's because regular ('dumb') wall chargers use USB's data connections to signal in a static, analog way what they are capable of. 'Smart' chargers can do the same, but in a less static way: they watch the behaviour of the charging device, and deduct from that the ideal setup -- which they can then emulate.

An image from the TPS2513a datasheet (copyright TI): 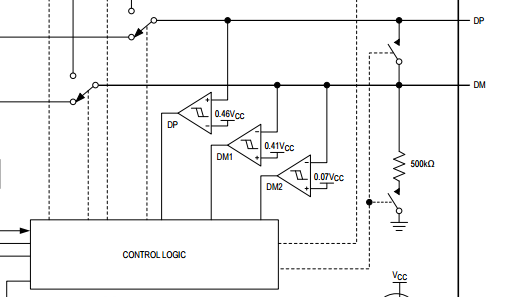 You can see that the USB data lines ('DP' and 'DM') have several configurable resources on them, and these are controlled by some 'smart' logic.

Different chargeable devices require different kinds of chargers. This is partly because the USB specification did not specify 'charging' behaviour initially, and partially because some manufacturers want their devices to only charge at their quickest on their own wall plugs. Also, a device may not draw more current than what it can assume to be allowed, to avoid the risk of overheating an incorrectly designed power source.

These types of USB sockets can be distinguished:

'Smart' chargers -- i.e. the 'DCP controller chips inside them -- can emulate a standard DCP port with varying resistor values, and can also emulate several of the non-standard DCP voltages.

The chip manufacturers don't really describe how their 'detection' logic works, but the only option they have is to monitor what the charging device is doing on the D+ and D- lines, and to look at the current that is being drawn.

This no doubt requires a lot of trial-and-error research, and the algorithm is probably kept as a closely guarded secret.

One technique which might be used, is to cycle through the emulated states and noting the amount of current that is drawn. The state with the highest current draw then is the 'best' and remains active.

Don't be confused by the marketing of the charger manufacturers which claims that a chargers "delivers the maximum current for the device". A USB socket is a voltage source; it only controls the voltage and it's the charging device which 'decides' how many current it 'takes in' while charging.

So there is no way a charger can 'force' a current into a device that does not accept it, at least not by staying below the safe maximum 5.1 Volt.

The only thing going on is some trickery to make the charging device believe that it's connected to the most capable, best-suitable, most compatible charger it can imagine.

I'm just a software engineer, too, but part of my job involves reading the USB spec documents. Here's what I know:

There are two official protocols for power over USB. The first, BCD, was released in 2007 and updated in 2010. It uses various data line tricks to identify how much power the downstream device is allowed to sink. This doesn't have to be a full USB handshake. For instance, a dedicated charger identifies as such just by shorting D+ to D-. That indicates that the downstream device can sink up to the max charging current, which I believe is 1.5A. You can read the BCD spec here.

The newer protocol is PD (Power Delivery), which is distributed as part of the main USB specification. PD is really interesting. It allows for power information to be exchanged over the voltage lines rather than the data lines, and it can support up to 100W (20V / 5A). However, high power applications require the cable to be marked electronically to indicate that the cabling can support high voltage / high current without melting. :-) There are several "markings" defined in the spec, but they all seem to involve dropping either a resistor or a capacitor between two pins in the plug.

That said, the likelihood of any cable or charger actually implementing the entire spec correctly seems pretty low. You can follow the exploits of Benson Leung on Amazon.com to see just how many ways manufacturers have found to screw this up.

I don't know for sure, but I think it's very likely that marketing labels like "PowerIQ" are indicating chargers that try to achieve compatibility with as many devices and cables as possible, including ones that are hopelessly nonstandard. Unfortunately, there's no good way of telling how close any particular charger gets to that ideal.

(old topic, but new information based on latest USB spec.)

As already mentioned, the new USB specifications do allow for higher than 5V charging voltage, if the device requests it.

This would typically be for notebook computers or other devices that have higher cell counts and/or operating voltages. The cables must also be designed and specified to handle these conditions.

I share your nausea at that language, however, I agree that there is likely some truth behind this matter. USB devices declare themselves based on vendor, product, and device IDs so that the host can recognize what is being connected and treat it accordingly (ex: finding the appropriate driver). Furthermore, I'm not a battery expert, but I've been exposed enough to know that Li-ion batteries have some strange charging requirements to avoid overheating. It's not unreasonable to think that a USB product could negotiate a more optimal charging pattern as is described here given that it is interfacing with a tailored driver or product on the other end.

An example of a Li-ion charging pattern that I have seen is constant current until battery voltage reaches 4.0V followed by constant voltage until the battery reaches 4.2V. Perhaps different batteries have different patterns (again, I'm not a battery expert).

[...] there is actually something more complicated going on.

Yes. In short, smart ports use hacks of non-standardized charging mechanisms to achieve optimal currents. The common assumption that all USB devices base their charging protocols solely on the USB spec or the BCS extension is false.

Many USB chargers only have 'dumb' floating data pin ports described by the BCS, aka DCPs, Dedicated Charging Ports.

A smart port can act like a dumb port (DCP) or it can emulate several proprietary ports in case the USB/BC spec isn't supported or optimal. This emulation may break down in certain scenarios and cause problems, which is why each brand of smart-charger tries to distinguish itself in terms of reliability, speed, and compatibility. Making them may involve some reverse engineering.

Ideally, 'smart' chargers wouldn't be needed and all devices would use the same charging standard. If it's not a host/charger it recognizes a device may:

[...] what's going on with these smart ports to enable the device to draw more current? [...] are the USB data lines actually used to negotiate some charging pattern?

Kinda, depends on which charging spec you're looking at. I believe Apple uses the data lines, but nothing complex happens, they're just set to 3V to indicate it's an Apple charger.

The DCP isn't the only charging port described by the BCS. Some (few) devices prefer to require enumeration (i.e. using the data pins handshake) and so need a CDP (charging downstream port) which is more complex because it allows data transfer in addition to charging. I suppose a port that is fully BCS compliant, i.e. can switch between CDP and DCP, could be considered 'smart' even if it doesn't emulate any other technologies.

I would guess that to charge a battery as quickly as possible, you would draw as much current as possible, [...] surely they could draw more. Why is this?.

Correct, but only if the charger meets their specs, otherwise I guess they just don't trust it. Or maybe it has to do with competition and patents, or algorithms that optimize battery life. I think the how is more interesting than the why though.

I'm not an EE either. (Also a software engineer with a well-read hobbyist's understanding of electronics.)

It's my understanding that the convention is that normal USB devices will draw a maximum of 500 mA, no more. Anything more is a violation of the USB standard.

"Smart" USB chargers include solid state logic with serial communications chips. When you plug in a device that wants higher current, it sends a query to the power supply saying something to the effect of "I want 2 amps. Is that OK?" If the power supply is a dump USB port, it doesn't answer at all, so the device either doesn't work, or only draws the default 500 mA (and charges much more slowly.

I have a Samsung S5 phone and a Note 10.1 (2014 edition). I have an in-line USB meter that measures voltage, current, and maH. When one one these devices is connected to the OEM charger the charger output rises to 5.5 volts, and the charge current is about 1.6 amps. If I try this using a cheap wall wart rated at 1 amp, the voltage stays at 5.0 and it charges at 0.8 amps. I also have several battery-powered chargers. Most of them, though rated at 2 amps or more, provide only 5.0 volts and the charge current remains at around 0.8 amps. From this I conclude that the Samsung protocol is for the devices to request fast charging by one of the means stated above, and that the charger signals it is capable of that by raising its output to 5.5 volts.

Not the answer you're looking for? Browse other questions tagged usb battery-charging charging or ask your own question.

5
Power from 2 USB ports for faster device charging?
1
How can I vary the output voltage of a “smart” USB charger?
5
Is it generally safe to use any USB charger with any USB device? How does device know what current is charger able to provide?
1
Can I high current charge port transfer data at the same time?
0
Where do USB ports on laptops typically source their power when the laptop is charging?
0
Is 5V 5A Battery Charging legal with USB and how to signal it?