I'm looking into isolating an analogue input coming from field equipment and interfacing to a PLC analogue input module. The input will be of the 4-20mA range (1-5V).

There are a few ways to approach this but I am currently pursuing the solution as seen below: 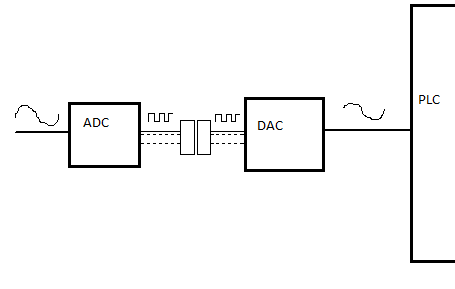 ADC and DAC are being proposed as Microchip MCP3221 and MCP4725 respectively.

A digital isolator would give a smaller footprint than an opto-isolator with its accompanying components and would provide much greater performance. Possible components include TI ISO7420FEDR and Analog Devices ADUM1200ARZ.

Now for the actual question! Keeping both sides isolated is pretty vital and I'm wondering how this will effect the ADC and DAC linking.

Frankly, SPI interfaces are better suited for isolation than I2C. You can set the master clock to a frequency where the timing works out reliably. I2C is a bidirectional bus which makes isolation a pain.

If you insist on using isolated I2C, AN-913 from Analog Devices is an application note that illustrates how:

If I needed an analogue signal isolator like this I'd choose a serial output ADC that could run continuously, possibly from a local clock generator that also generated a conversion pulse. The output I would aim to get is: -

This could be transmitted thru a simple magnetic coupler (as per a lot of the ADI isolation devices) and you could decode the serial stream using the "gap" like the stop bits in an async serial stream with a small cheap microprocessor. This would then feed a DAC.

I think that trying to do it without a micro controlling to the DAC could hit problems. At least start off with a methodology that stands a chance of working and is easily modified to suit different ADCs and DACs.

I'd also be interested in the isolated ADC part driving a decent length cable so the DAC part can sit at some distance to it - this would allow you to digitize at source rather than degrade the analogue signal by having this transmitted to the "converter".

Not the answer you're looking for? Browse other questions tagged digital-logic adc dac plc or ask your own question.