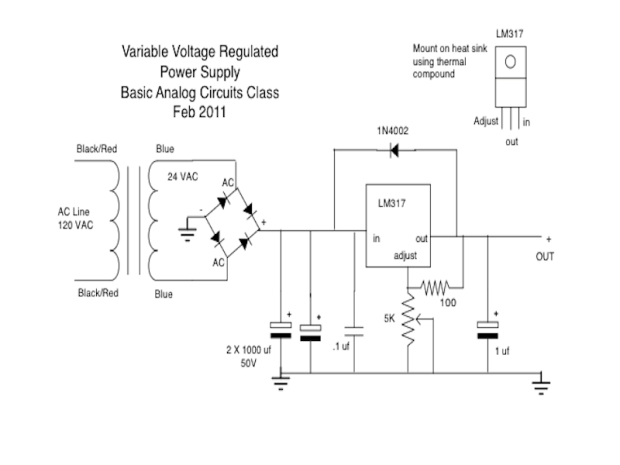 I made a power supply from a diy site, the schematics are above. The site showed the project as 2amps output but I'm not getting even close to that. I'm getting around .14A or less. Does anyone know what the problem might be. Also I didn't include the diode that is shown above the lm317, but I don't think that has anything to do with it. Lm 317 says its rated for 1.5 A. The Transformer I'm using is here

The Heat Sink I have is here

I have it connected to a usb charger for my phone, which should use max 5v and draw 1 amp. I'm using a multimeter to measure the current. It is dynascan 2807 digital multimeter.

Update: When the charger is connected the voltage drops to .4 volts?

Update 2: Never going to copy schematics from Makezine website again. Or do any projects from there. Secondly thanks for all the useful feedback Im learning a lot. What would be the best way to do a variable power supply then or is it just not feasible. Should I just make a power supply with 3.3 5 9 and 12 options or is my problem the transformer output is too high so after rectification its way to high? I really only wanted a variable power supply from 3.3 to 24 yet it is much higher than that because of rectification. I'm just gonna blame makezine again.(Although I could have done some research on how bridge's increase voltage

Your 24 VAC transformer will produce about 32 volts at the main filter caps. Producing a 5 volt output from the LM317 means that you are dropping about 27 volts across it. A current of .14 amps says the LM317 is dissipating about 3.8 watts. The data sheet for your heatsink says that the temperature rise AT THE HEATSINK will be about 80 C, for a heatsink temperature of ~105 C. This is consistent with your measurement. If you look up the datasheet for the LM317, it specifies a thermal resistance (chip to case) of about 5 degrees per watt, so 4 watts on the chip will give it a 20 C rise over the case. Since the case is tied to the heatsink, your chip temperature is right about 125 C, which is the absolute maximum allowed. Dave Tweed is right about the regulator shutting down in order to keep from self-destructing.

If you could pull 1 amp, you would be dissipating 25 watts, and your heatsink temperature would be (roughly) 500 C. Plus another 125 C rise to the chip itself, and there is simply no way that's going to happen.

Oh, I think @David Tweed hit it. That heatsink might be too small. (wet your finger and touch the heat sink... what happens?)

Not the answer you're looking for? Browse other questions tagged power-supply current transformer output or ask your own question.