mechanical load of an alternator

I'm wondering about alternators used in automobiles and the mechanical load that they present to the engine. My question is: what is the relationship between the mechanical load presented by the alternator and the electrical load presented by the car's electrical system? Similarly, if I were able to reduce car's need for electrical power or provide a supplemental means for energy harvesting, what potential increase in performance or fuel economy might I see?

An alternators load on the engine will be however many watts of power it is producing, plus any inefficiency of the alternator itself.

This question: https://mechanics.stackexchange.com/questions/1536/how-much-power-hp-do-the-components-on-the-engine-belt-generally-use has an estimate of the power consumption of a 150 amp alternator at full load, being 7-8 horsepower. A 150 amp alternator is pretty big, and it's pretty rare that the alternator will be running at full blast.

You won't see very significant changes in fuel economy replacing the alternator, it generally doesn't draw enough power to be worthwhile to replace. Once your battery is recharged after starting up, the majority of your alternators power is probably going to be powering your car stereo or charging your phone, as the ignition and engine control systems only require a few handful of watts.

One thing that is interesting though, is some automobile manufacturers are considering eliminating the serpentine belt from their vehicles, and powering all auxiliary systems (AC, power steering, cooling pump, etc) by electric motors powered by the alternator. Apparently this can yield improved performance, or dramatically increase maintainability.

edit: With all that said, these guys Remy International, a GM subsidiary, claim the opposite of my conclusion.

From the website Inteckopen.com you can see that 50% is typcial. 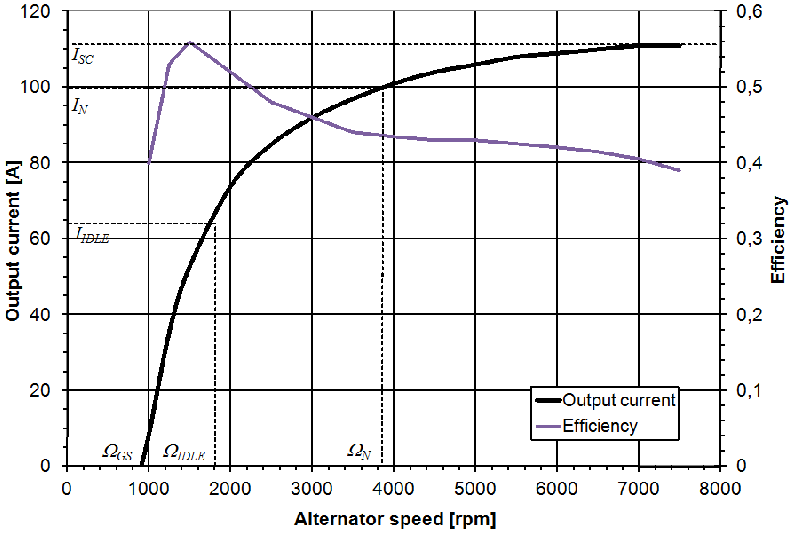 Not the answer you're looking for? Browse other questions tagged power motor alternator or ask your own question.

11
Can you harvest electrical energy from the air?
2
How does a synchronous motor know to increase current when the mechanical load is increased?
0
Alternator Charging Light
0
Refitting a 6 volt shunt regulated system to a buck regulated system
0
Voltage regulation in alternator
1
Open-circuit alternator
1
Selecting the right PMDC motor and battery