In the April 2014 edition of Elektor magazine, they present a circuit for a high-precision current source device (page 42). It allows the user to select a constant-current between 10nA and 20mA. They do a decent job of academically explaining the core of the current source itself, even providing an idealized version of it: 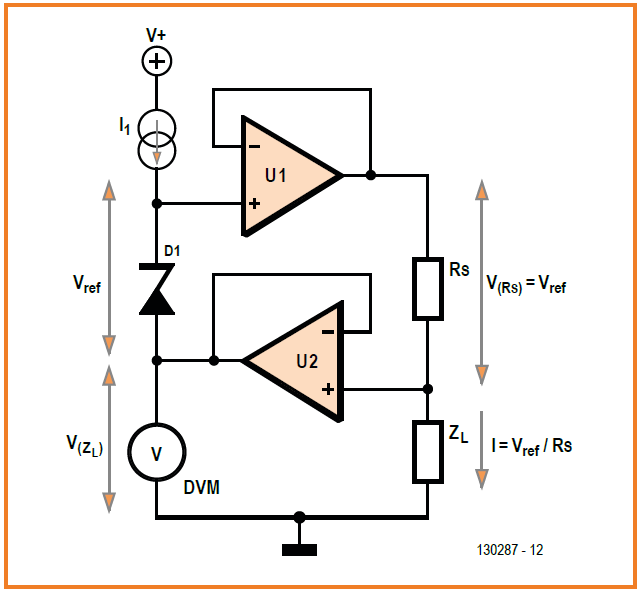 They then show how they implemented this current source in the actual device. They made Rs selectable for the different currents and added components for real-life considerations like surge protection and such. I got a little lost with their usage of a few components though that I'd like some help understanding.

Here's the relevant part of the full circuit. To keep the image size manageable, I'm cutting out the top half of the circuit, which is mostly the interface circuitry for the LCD screen and the DC-DC voltage converters.

The components that are confusing me are T5, T6, and R59. I'll go through them separately:

1) The article says T5 serves as a surge protector. But if the gate is connected to the bottom of RS (RS-SEL in this schematic), wouldn't the Vgs of the JFET be 1V? Therefore, the FET would never turn on under normal conditions, which kind of defeats the current source? I'm obviously missing something.

They're pulling a bit of a trick here — a JFET can also function as an ordinary diode. For example, look at T9 down below. If a positive surge is applied to K2, the gate-channel junction of T5 will be forward biased, which connects it directly to the output of the opamp, a low-impedance point.

The advantage of doing this is that in normal operation, T6 has very little leakage and very little capacitance, so that it doesn't disrupt the low-current settings.

Remember that a JFET is a depletion-mode device. It will conduct current unless the gate is driven more negative than the channel (relative to either the source or drain terminal) by the specified threshold voltage. With a VGS of -1V, the FET still conducts. The drain-source resistance doesn't upset normal operation because of negative feedback, IC6 will raise its output voltage to the level required to force the desired current through RS.

No, because R59 is inside the feedback loop for IC6, the opamp automatically compensates for its effects.

3) For user-selected currents above 100uA, how does R59 and T6 affect the voltage going into the resistors downstream? Wouldn't they contribute significant voltage drops that mess up the 1V reference calculations? I can't figure out an intuitive feeling for how the resistor and transistor work together here.

Again, because of negative feedback, when T6 conducts, IC6 reduces its output voltage to maintain the correct voltage across RS.

The general principle is that components between the output of the opamp and the feedback point don't matter (within certain limits), because the opamp will act to reverse their effects and maintain the desired voltage at the feedback point. It can be tricky sometimes to understand exactly where the "feedback point" is in some circuits. In this case, it is the node labeled TP6.

Not the answer you're looking for? Browse other questions tagged components circuit-analysis constant-current or ask your own question.