DAC but what load?

I want to control a hydraulic valve which accepts a variable voltage from 0V to 12V. That's easy enough with a DAC, but I'm not sure what load I can drive with a DAC. Unfortunately it's not easy getting your hands on data sheets for hydraulic valves so I'm not sure what current will be required by the solenoid. I've sent a question to the maker and hopefully they'll provide the specs.

Mean time I thought I'd try to find out more. How do you drive a load from a DAC? I've looked over a few DAC data sheets and they don't seem to specify the load that they can drive. If they DAC only drives a limited load how do you get a higher load? I know there is a Current mirror but is there a similar mechanism for Voltage?

If you Google "Programmable DC power supply" you'll get a lot of hits for power supplies with output voltages and currents adequate to run your valve which can be controlled by low-level DC signals to the supply.

Like the buffered output of your DAC or, perhaps, unbuffered and straight into the supply.

Here's a quick and easy method, if it turns out you need to push some current over the entire 0-12V range. 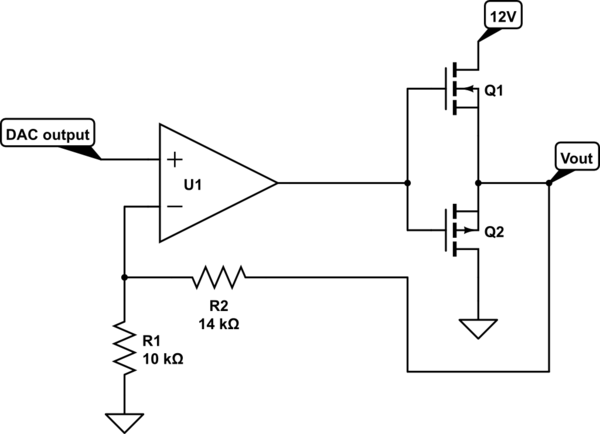 The op amp should be a rail-to-rail input and output op amp, typically CMOS. The MOSFETs need to have relatively low thresholds. It may also be necessary to heat sink them.

In all likelihood a proportional hydraulic valve of the type that you describe can be directly controlled via a switched pulse width modulation (PWM) waveform. The concept would be to use two pairs of high power MOSFETs in a H-bridge configuration. The bridge would switch each end of the control coil from 0 to 12V. Then each side of the control coil would be switched the opposite polarity as the other. This meaning of course that one end would switch to GND while the other went to +12V and switch to +12V as the other end went to GND.

The frequency of the PMW waveform would want to be in a frequency range that was higher than the mechanical resonance of the control valve but not so high as to make it difficult for the H-bridge to fully switch the coil ends between the +12 and GND levels.

By varying the duty cycle of the PWM waveform over some range (could be 0 to 100% or even a lesser range of 5% to 95%) the valve position would change in proportion to the duty cycle.

I believe (although I have not looked recently) that some industrial hydraulic valves already have the H-bridge drivers built in and all that is necessary is to connect up the +12V, GND and a suitable PWM signal.

Not the answer you're looking for? Browse other questions tagged dac or ask your own question.