Training sequence in a GSM frame?

I was reading about the GSM frames used in GSM communication. One thing pretty unusual caught my eye.

Training Sequence: This is used by the receiver’s equalizer as it estimates the transfer characteristic of the physical path between the BTS and the MS. The training sequence is 26 bits long.

26 bits training sequence: This training sequence is used as a timing reference and for equalisation. There is a total of eight different bit sequences that may be used, each 26 bits long. The same sequence is used in each GSM slot, but nearby base stations using the same radio frequency channels will use different ones, and this enables the mobile to differentiate between the various cells using the same frequency.

These are the definitions about the Training Sequence from 2 different sources. But, why would someone put the training sequence in the middle of a frame? Wouldn't it be more clever for the training sequence to be in the beginning of the frame so it can train the equalized for what is to come next? 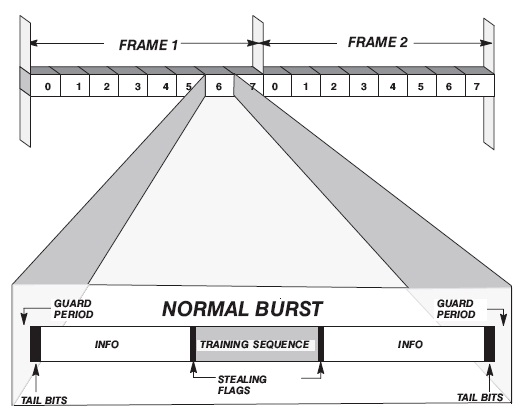 The raw data for each packet is buffered anyway, so it doesn't really matter where in the packet the training data is placed. Equalization is applied to the entire pakcet in the buffer once the parameters are calculated.

However, there is the issue of timing jitter between adjacent packets, which, in the worst case, causes the ends of the packets to overlap. This is the reason for the "guard period" in your diagram. Also, channel characteristics such as multipath can cause energy to "leak" from one packet to another (a form of intersymbol interference) even if there's no direct overlap. Putting the training data in the center of the packet timeslot subjects it to the least amount of time-domain contamination, giving the best results for equalization.

Not the answer you're looking for? Browse other questions tagged gsm or ask your own question.