Can an operational amplifier circuit be made entirely out of diode Nand and Nor gates?

I'm not sure whether this question has been asked before, but in researching my question, I came across this user's post (at If-else decision structure using op amps or any other non-programmable electronic device), which appears to ask my question in reverse. This user seems to be asking (effectively) whether OP Amp circuitry can be constructed in such a way as to mimic or "emulate" logical operations (or by extension, logic gates). My question, which is precisely the reverse of that, is can a circuit, consisting entirely of particular combinations of NAND and NOR diode logic gates, be constructed to function like an Operational Amplifier? (I recently asked an electrical engineer that question, and his brief answer was "no". But he never explained why he believed that it could not be done. If it cannot be done, there should be a rational reason why that is the case.) I suppose that an equivalent alternative way of phrasing my question might be, can there exist an algorithm for simulating all of the operations of an Operational Amplifier? --John

Can An Operational Amplifier Circuit Be Made Entirely Out Of Diode Nand And Nor Gates?

This apparently simple-enough question is somewhat ambiguous and can be answered several ways.

Gate is digital, signals are analog"

No, not if the gates are used as digital logic gates and the amplifier deals only with analog signals.

DTL = Diode-Transistor-Logic gates can have gain and can be made into (not very good) amplifiers by using them "strangely". The series diode connected inputs place constraints on what can be achieved with analog inputs. You'd have to be very keen.

If you are prepared to use digital gates in analog mode, as is done in some applications, then yes, it can be done. This is relatively unusual in everyday use and is usually a compromise or "done for fun" or extreme cost cutting.

An "Op-Amp"is an analog signal amplifier with high gain (Vout/Vin = "high", a high input impedance and a low output impedance. I could explain what "analog" means in this context but, if that's unclear, it's an essential part to understanding the question, let alone the answer, and you can very easily research it yourself.

If SOME digital gates have connections made from output to input via a resistor or resistor network, they can be biased into a linear state and then used as an analog amplifier.

Some Diode AND and OR gates MAY be able to be biased in this manner and so used as an amplifier. This is not using them in their intended mode and the amplifier quality would be poor. The diodes would add very significant distortion. Even older RTL logic may work better than this but it's still not a true digital gate when used this way.

Example of a modern CMOS gate being used in an analog biased mode to create a lineara amplifier.

Circuit is from here

You will only rarely find this concept described. It works.

BUT (and many people are not aware of this) you can use some sorts of digital gates as analog amplifiers while remaining in a digital mode. This is a rather (or very) special case.

eg if a 74C14 Schmitt triggered input inverter has a resistor connected from output to input it will oscillate (for a certain range of resistors), using stray capacitance as part of the RC timing circuit. If you now AC couple an AC signal to the input the output will be pulse width modulated. If you low pass filter the output signal you can get amplified analog. Ask me how I know :-). The secret to "keeping it digital" is the Schmitt trigger input. The gate cannot be biased into a linear mode due to hysteresis and oscillates instead.

fosc should be >> finput. As the gate input is driven above half way by the incoming AC the negative to positive transition times of the oscillation are skewed, and similarly as Von falls below half voltage, but with opposite effect on mark space. The resultant output is variable mark-space PWM driven by Vin. Filtering this AC signal recovers the amplified signal.

Diagram based on this original

The heart of the operational amplifier is the difference amplifier, where a current is divided between a pair of highly matched input transistors. This is what allows high gain combined with low offsets. Logic gates simply don't have the geometry to do this.

So the answer is no.

That said, logic inverters (and by extension almost any inverting gate such as a NAND or NOR), has the potential to be used as a linear amplifier - provided you can provide proper biasing and don't expect great performance. This approach is commonly used in producing low-performance crystal oscillators, which don't require purity of output waveform or exceptional stability. Back many years ago I seem to recall the occasional circuit idea using CD4000-series inverters as AC-coupled amplifiers, with such use limited to the non-buffered gates. But these applications are not operational amplifiers, merely more-or-less adequate single-ended amps. I also seem to recall that they had very limited linearity.

Sure, if you have digital numbers for the input voltages an op amp merely does the calculation Vout = Av(Vin+ - Vin-). Easily done with gates (and either NAND or NOR gates would be sufficient).

NAND and NOR gates require more than just diodes, they require transistors, of course. OR and AND gates are not sufficient. 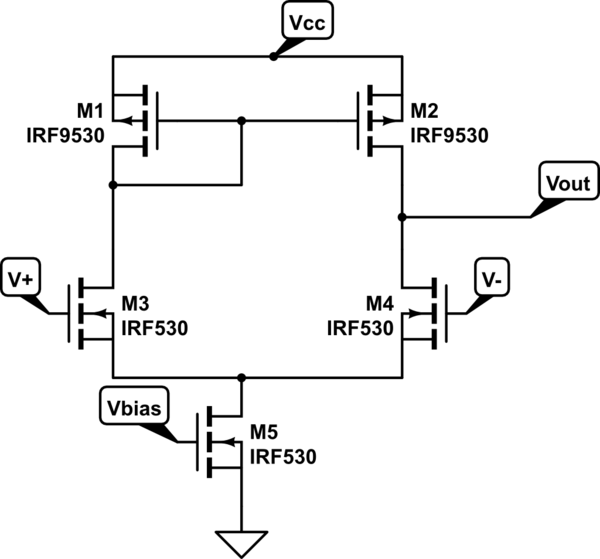 And you can build it using NAND gates: 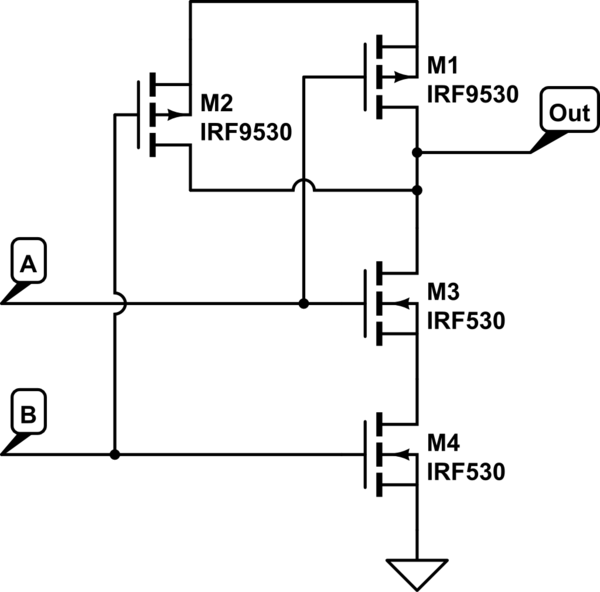 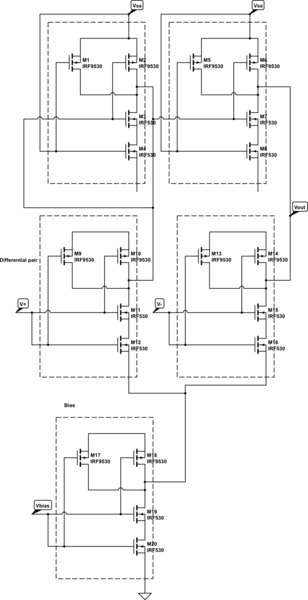 So the answer is YES.

Keep in mind that this will be crap, and will operate only over avery narrow range. The primary tool for operation that we have in the design of op-amps from transistors is playing with the widths and length of the transistors. We could do this here a little bit, especially in the diff pair as I could parallel several NAND gates.

Of course I haven't given you the necessary background to understand how this works, but the circuits (topology) are identical. To clarify things, if something is not hooked up, then ignore it and if you trace the connections you can see that I have duplicated the op-amp using 5 NANDs.

An operational amplifier must have gain. There is no way to get gain out of diodes.

Not the answer you're looking for? Browse other questions tagged digital-logic operational-amplifier diodes programming or ask your own question.

12
Does using only NAND/NOR gates increase circuit delay?
0
Turn S R Latch Using a NOR gates into NAND
5
Preference of NAND & NOR gates
0
Equivalent circuit composed entirely in NAND gates
1
Circuit Using only NAND and NOT Gates
0
Circuit Diagram with only NAND Gates