PS: I did try Google Searching for those numbers but didn't come up with anything definitive, so this is partially about learning what the right way to identify / look up components is. Also, if I need to graph the resistance over a temperature range I can do that as well. 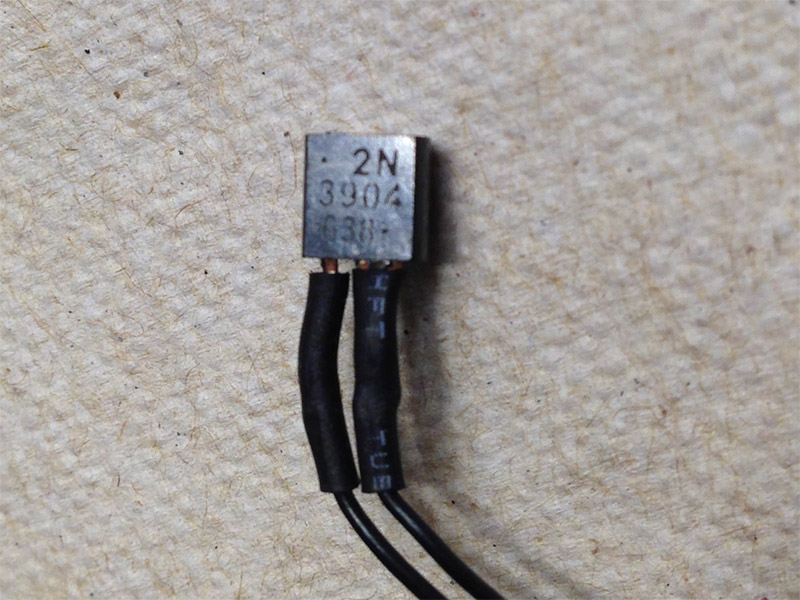 It's an NPN transistor- a very common one. You can find the data sheet easily by searching. They're around a dime each in small quantities from any distributor.

They've tied the base and collector together so it's a diode-connected transistor.

Such a diode-connected transistor follows the ideal diode equation more closely than a real diode at lower currents.

In the simplest implementation you put a current (say 100uA~1mA) through the transistor and it has a forward voltage of around 600mV that changes at about -2mV/°C. However the forward voltage and the tempco vary from unit to unit.

By using two or three different currents you can cancel out the unit variations and also the resistance of wires going to the sensor by using a bit of math and choosing the currents carefully. It's possible to get interchangeability of sensors in the +/-1°C range typically without calibration or selection.

This exact method is used to monitor CPU die temperature in a PC- the diode is part of the CPU chip.

If you want to test if it is functional, many multimeters have a diode test function that should show a number such as something between 500 and 600 in one direction, and overrange (open) in the other direction. If it reads something like that, it's almost surely functional.

Not the answer you're looking for? Browse other questions tagged components identification thermistor or ask your own question.

13
What is a good methodology to identify small SMD components?
2
Where can I find more information on this mysterious IC? (V100 ZJ51VMP)
6
What are the common footprint naming conventions
0
Can't find component from schematics
2
Searching USB cable with 4-pin connector
0
Symbol with FB1&2 , meaning and where can I source it?