Help to design an amplifier

I need help designing an amplifier that is capable of providing 1 W to an 8 Ohm speaker. I have 3.3 V, 5 V or 18 V supply available to power it.

I also have only one power supply available that has no negative output.

The signal is coming from an AVR as a 3.3 V PWM signal. I have following components available:

The last three ICs I got from an old 500W amplifier (thats why I posted them in here if they are useful).

I already experimented with push-pull, common emitter but just couldn't get it to work (not enough power and distortions).

I request this question to be reopened.

I am editing this question with hopes to get help from you guys, I will try to stick to the rules.

Thanks to Olin Lathrop I designed a bridged class D amplifier, but its not working as it should. First off, here is the schematic:

NOT, AND, NAND gates are all made from NAND logic gates.

NAND1 prevents both halves of the H-bridge to be on at the same time (at least thats what I though it would do).

NAND1, AND1 drives one half of the H-bridge, when the PWM signal is high.

NAND1, AND2 drives second half of the H-bridge, when the PWM signal is low.

The purpose of these logic gates is also, to convert 3.3 V PWM signal to 5 V.

If I connect only one half of the H-bridge I get expected distorted sound output. Now, when I connect the second half, it makes a really bad noise and PWM signal stops.

What I think happens:

When I did some measurements with osciloscope I expected that when I would add(+) both waveforms, from AND1 and AND2, I would get a flat +5 V line, but in reality there are some spikes reaching to 0 V and 10 V on both rising and falling edges of the waveforms. So I suspect that, due to this, both of the halves of the H-bridge are on for a small amount of time, to short circuit whole thing to ground.

I am not an expert on this matter, so I would really appreciate any help from you.

The first thing to do is to look at what output voltage you need.

From this you can determine that you need 2.83 V RMS, which is 4 V peak, which is 8 V peak to peak. This clearly eliminates the 3.3 V supply as being able to power the final stage. The 5 V supply could be used if you implement a bridge drive circuit, which ideally can drive to ±5 V. You need ±4 V, so 5 V supply is about the minimum, and gives you 1 V overhead the pass elements are allowed to eat up. Since a saturated BJT is usually just a few 100 mV, and a fully on FET can easily be found at this voltage that is just a few mΩ when on, this is at least doable.

The 18 V supply is large enough to power a single-ended driver, with the other side of the speaker connected to ground thru a suitably large capacitor. However, that will be quite inefficient and will require some thought about how to get rid of the heat unless you use a class D final stage.

The rest is really up to you. This isn't a gimme da codz kind of site, and your question is otherwise too broad, and may even get closed on that ground.

As for your parts list, I'm ignoring that completely. Parts to make a variety of small audio power amplifiers like this are cheaply and readily available at the other end of the internet, so nowadays designing to some limited and usually inapplicable set of parts you happen to have on hand is silly.

Picking up on Carveone's suggestion something like a TDA2822 and a few components should do the job at low cost using a 5V supply. I would recommend you use a bridged output (speaker is connected between the two outputs) which gives a greater voltage swing than a singled ended output for a given supply voltage. (See Olin's answer).

A suitable circuit would be. 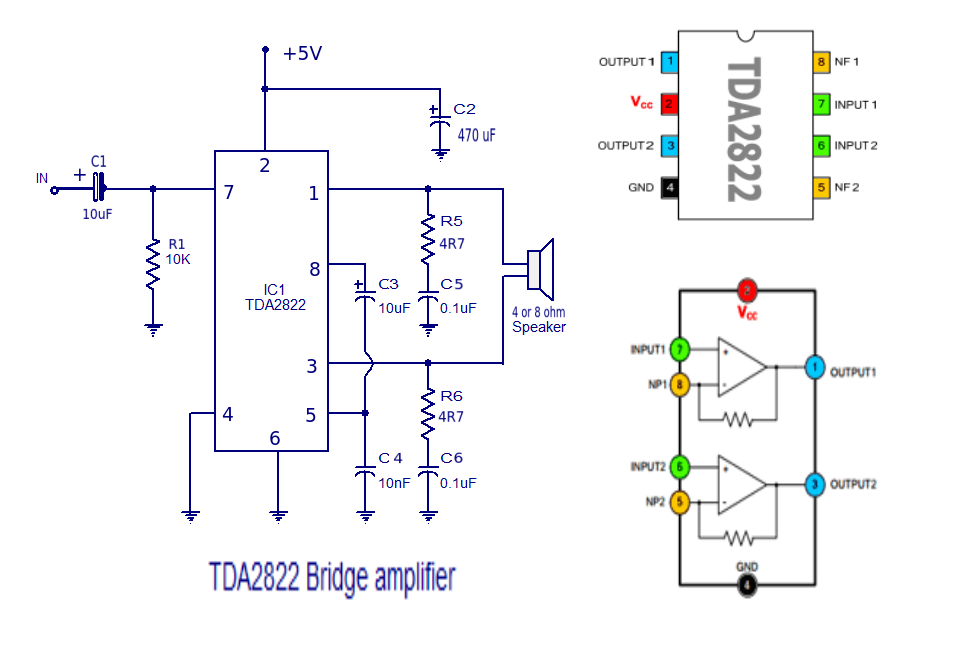 With the values shown you should have no problems constructing the circuit.

If you want an 'off the shelf' solution try one of the PAM8403 (3W + 3W) stereo amplifier (class D) available from ebay for 99p delivered.

Not the answer you're looking for? Browse other questions tagged amplifier pwm or ask your own question.

2
Is a low load resistor a big problem in low pass filter and amplifier circuit
1
How do I tell if my amplifier is voltage-to-voltage, voltage-to-current, etc
2
How can i reduce the offset error of the error amplifier of my PWM generator?
0
Current Amplifier Design
0
Latch-based sense amplifier design using CADENCE Virtuoso 65 nm technology
0
500 mW RF amplifier for 170 MHz design
0
Class AB amplifier BJT operating point question