How does an astable multivibrator LED blinking circuit work?

I am a beginner in electronics. I come to know about the oscillator using RC circuits (capacitor charge and discharge and time constant tells the behavior of circuit).

Then I saw the following circuit that blinks 2 LEDs timely in sequence. Will somebody explain its working? I know that capacitor will charge and during charging the LED will be off and when they discharge they will turn on the LED.

But why are the transistors there? 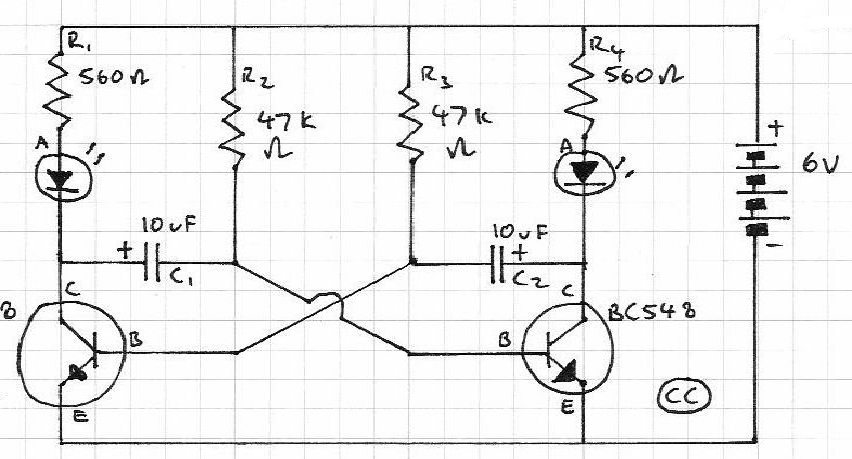 This circuit is called an astable multivibrator, and the reason this circuit works is a little difficult to put into words.

Take a look at this circuit simulation that shows visually what is happening. You can slow the speed right down and look carefully at how the current is flowing.

Note that while the circuit would have a stable state with both transistors on and both capacitors reverse-biased by 0.7 volts, in practice the winky-blink circuit always starts oscillating rather than entering such a state.

Not the answer you're looking for? Browse other questions tagged led transistors basic learning or ask your own question.

1
Smallest circuit to make a sound
2
What is the function of resistors in this flip-flop circuit?

6
How does this circuit diagram work?
0
Alternative LEDs Blinking circuit(Analog) Help
2
2 LED Parallel circuit help?
6
How does this transistor dual LED flasher circuit work?
1
Transistors hooked up to one another
5
Can I use a capacitor and a transistor to create a circuit which automatically turns off an LED after a period of time?
3
How and why does this oscillator work?
3
Help needed in understanding this LED chaser circuit
2
Explanation of the circuit in an LED bulb