Bypass capacitors between via and chip? 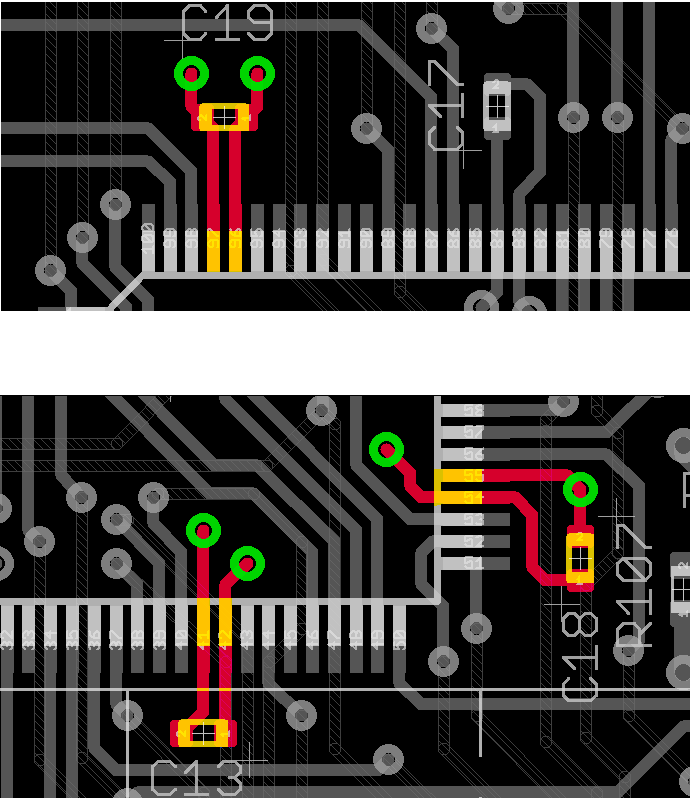 In the comments, it is mentioned that C19 is the worst approach, C18 slightly better and C13 the best way, which is somewhat contrary to my understanding, so I'd like some clarification.

I'd expect the C19 layout to be close to optimal:

I'd probably use wider traces between the capacitor and the vias (Altera's AN574 suggests that).

C13 is a bit closer to the IC, but the vias are on the far end of the connection, so I'd expect worse behavior at high frequencies (probably too high to matter, but...)

The C18 layout is the worst:

Where am I going wrong with my analysis?

The EMC right approach is C19 because the high-frequency ripple which is generated from the IC is routed over the C19 pads and therefore it is filtered.

To simulate that you can us REDEXPERT or SimSurfing. The size and the voltage rating of the capacitor plays a big role too.

There are two aspects:

The result of those two considerations is to use multiple capacitors in different technologies:

This is my approach to reduce EMC.

The critical thing here is how you think about the layout. C19 will indeed keep high frequency from the chip from getting into the rails, and vice versa, but you're not trying to filter high frequency noise (at least usually), you're trying to minimize the impedance across the power rails from the perspective of the IC.

Effectively, C13 has the capacitor and the power rails in parallel across the chip's power connections. C19 has them in series, and C18 is a mix of the two.

Not the answer you're looking for? Browse other questions tagged pcb-design bypass-capacitor or ask your own question.