I was reading an electronics book and came upon this circuit. 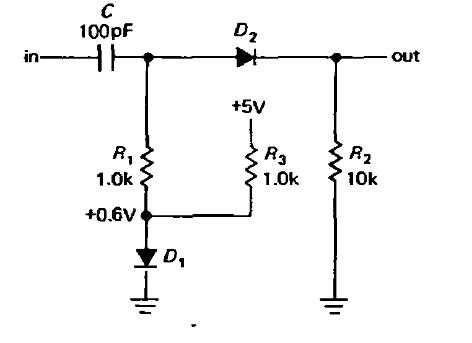 I am having a difficult time understanding why the voltage across D1 is 0.6V. I understand that that the reason is because the input signal's pp voltage is lower than 0.6v C and R1 make a differentiator then D2 rectifies that but none of that would work if the signal is less than 0.6v. I just don't understand why D1 is at 0.6V and how that makes D2 be higher than 0.6V. I was going to post a diagram but I don't have enough reputation.

The short answer is that this is the "magic" of capacitive coupling. The signal voltage is superimposed on top of the node "bias" voltage (which is 0.6V). Therefore the voltage at C,D2,R1 is 0.6V + Vin, not just Vin. And therefore the diode D2 must turn on, have a 0.6V drop across it (assuming D2 and D1 identical), and the output voltage must then be basically equal to Vin. It is important to note that just the AC part of Vin gets through the cap. The DC part is blocked, if there is a DC part.

First, note the node D1, R1, R3 will basically be clamped to 0.6V at all times. This will not change no matter what the input signal is.

Second, remember that the I-V relationship for a capacitor is

What does this mean? It means that if your input voltage source changes, then the voltage across the cap changes. Therefore you have a nonzero $\frac {dV} {dt}$. Therefore you will have a nonzero current. (It's easy to get confused about signs at this point... bear with me) This is the differentiator action that you mentioned in your question.

So let's assume an increase in input voltage which would cause a current to flow "through" the cap into the circuit (to the right). Where does the current go? It can either go through R1 or D2 or both.

We started with the assumption that D2 is off, so let's first assume that the current flows only through the resistor R1. That causes a voltage to be developed across R1. So the voltage at C,D2,R1 becomes 0.6V + I*R1. Here is kind of the key part for you to see, I think... see that the voltage at that node must have an 0.6V offset? That is because the change in input voltage causes a current to flow through the capacitor, not a voltage. So the current causes an additional voltage to be developed across the resistor R1, which adds to the voltage at that node due to the diode D1.

Okay, so continuing on, this means that the voltage across D2 would be greater than 0.6V, since the cathode ("line side") of the diode is presently at 0V. If the diode forward voltage is 0.6V, then we have an extra voltage (equal to I*R1) that would cause the diode D2 to turn on--which would mean that the diode would present a very low resistance compared to R1, which means current would flow through the diode D2, also.

That came out pretty lengthy. I hope it was clear. It's tough to talk about circuits without a chalkboard or something to draw on...

EDIT: I reread your comment, and you mention a square wave input. In the case of the square wave, the voltage at C,D2,R1 is not going to look like a square wave. It is going to look like a series of positive and negative spikes. This is due to the differentiating action of the capacitor. The square wave signal is "constant in the short term". It just switches polarity periodically. It is during those switching times that a signal will appear at the C,D2,R1 node, because only during switching is $\frac{dV}{dt}$ nonzero. This is all assuming several "idealities" which I will not list out at this time, in order to keep it simple. It's easier to think about if the input signal were a sine wave (easier for me, anyway).

I'd say your confusion is justified. When the input signal is constant or varying near ground or above, D1 is forward biased, so it's at 0.6 V. However, if the input signal spikes massively downward, such that the voltage between C and R1 is below -5 V, D1 will be reverse biased, so it will act like an open circuit.

For large negative spikes, R1 and R3 act like a voltage divider. With a large enough spike, the voltage across D1 could be as large a negative voltage as you like (until R1 and/or R3 burn out or C explodes).

Of course, I'd assume that the point of the circuit is to handle small positive signals, so in normal operation, you'd just assume the diode was forward biased and thus at 0.6 V. 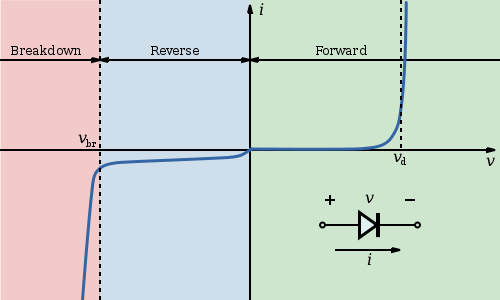 This kind of circuit is used in amplitude detectors which (assuming appropriate diodes) can work with signals from kilohertz up to several gigahertz. They give output voltage that is proportional to the amplitude of the input.

If you wire this circuit without $R_1$, $D_1$ and $R_3$ you will get a detector with the nice property that the output current is proportional to the square of the input voltage. This means that if you know the load resistance (which is most likely $50\,\Omega$) you can make a direct power measurement with just a linear scale ($P = {V^2 \over R}). Unfortunately this only holds if the input is below 0.6 V (or 0.3 V for Schottky diodes which are frequently used in such circuits) and the output current is very low (see the diode I-V characteristics below and the pictures in this document).

$C$ is very small (100pF) so you can treat is as a open circuit when considering DC voltages and as a short at high frequencies (it works like a $100\,\Omega$ resistor at 15MHz). This means that adding $R_1$, $D_1$ and $R_3$ will add some polarizing voltage (and current) to the $D_2$ diode. $R_3$ and $D_1$ form a so called shunt voltage regulator. Because of the highly nonlinear characteristics of the diode it's output voltage is largely independent of both the supply voltage and the current through $R_3$ (within some limits).

The output from this regulator is fed through $R_1$ (a small inductor would be even better here) to get some current flowing through $D_2$. This (thanks to $C$) shifts the average input voltage and that results in a change in the operating conditions of $D_2$. At higher voltages a diode permits more current to flow. Also the rate of change of the current with applied voltage is higher (recall the characteristics). This improves the sensitivity and makes it easy to measure thanks to the higher overall output current.

You could do this with a normal resistive divider but this would make the circuit sensitive to temperature and diode parameter variation. OTOH making $D_1$ and $D_2$ the same (in fact two diodes made from one silicon die are the best) will make the output from the shunt regulator follow any changes in the characteristics of $D_2$ (because of temperature, humidity or other stuff) protecting you from over- or under-polarizing.

R3 and D1 form a voltage divider with 0.6V in the midpoint. The 0.6V is given by forward voltage of the diode and R3 is there to limit the current through the diode. This voltage is then applied through resistor R1 in between C and D2 as a biasing voltage to make sure that D2 will stay always open, given that input voltage is smaller that the bias.

Not the answer you're looking for? Browse other questions tagged signal rectifier or ask your own question.

2
precise half-wave rectifier problem
1
Difficulties with Representation of Half Wave and Full Wave Rectifiers on PartSim
4
Why such low voltage across my filtered half-wave rectifier?
2
Rectified differentiator problem
3
Calculation of ripple voltage after rectifier (equation from TAOE)
7
What does “shift keying” mean in the context of digital modulation?
4
How does this signal chopping circuit work?
0
Clipped input sine with 1N4148 signal diode
9
Bridge rectifier outputting 338 volts DC with 120 volts AC input