Trying to Understand Spurious Sideband Interference (and some causality problems...)

Suppose I have a radio and I intend to transmit a 0.1 µs pulse on a 100 MHz carrier. Fourier theory tells me that this signal will produce some sideband interference resembling a Sinc function. 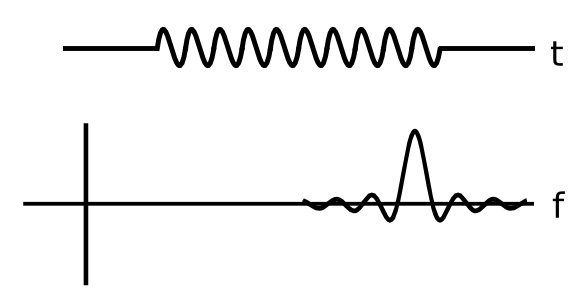 Suppose I have a friend Bob who is using an adjacent carrier. These spurious sidebands will be received as interference for him.

However, if I decide to lengthen that pulse to 0.2 µs, the sidebands get "squished in." 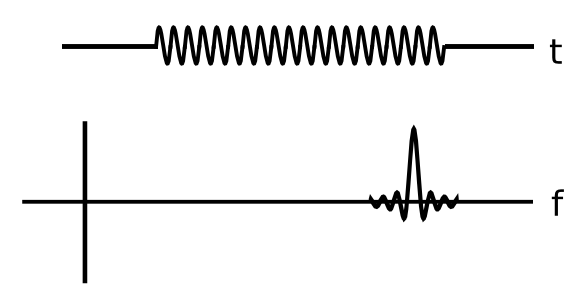 As a result, Bob hears a lot less interference. Here is where things start to get less intuitive for me.

I am forced to conclude that the interference does not formally "exist" until the very end of my transmission. However, this seems to go against experience and intuition. Is there a better explanation for all of this? Maybe some time-frequency analysis might explain things better, but I am still at a loss here.

Your gut starts good, it is the leading edge of the pulse that upsets Bob. You will not, or should not, be surprised to learn the trailing edge gives his receive filters a similar but inverted rattle as well.

Now there are several ways to look at what happens with these two events he sees. First a simple hand-wavy power ratio approach.

With a longer pulse, there's more total energy in it. However the energy in the leading and trailing edges stays the same. So the ratio of adjacent channel interference to transmitted power will fall.

Now a more detailed 'what about the zero power in the sinc spectrum'?

You will notice that your sinc function crosses the zero axis, so that at some frequencies there is zero power. These frequencies are offset from the centre frequency by a function of the length of the pulse. At these pulse lengths, the leading and trailing event are so timed in his receive filter that the second one cancels out the first. At the peaks of the sinc function, the second event reinforces the first for a bigger filter output.

So, you might be asking, how can two events which cancel each other out in his receive filter, one after the other, really be called zero? The problem is you don't really know what you have in the frequency domain until you have waited long enough. How long? Several times longer than 1/f, when you are trying to resolve frequency differences of f. It turns out when the leading and trailing interference effects cancel, there is indeed zero power at the cancelling frequency, but there are sidebands above and below which contain the definitely non-zero power. The filter has to be wide enough to accomodate these sidebands as well. If it was narrow enough to reject them, then its response to the first event would be such a slow buildup (narrow filter = long time delay) then by the time the trailing event arrived, it would cancel a signal that was still way below 'full scale', and was actually zero in the limit of a zero-width filter. Of course in communication systems, we need filters to respond in a finite time, so it's not even theoretically possible to use a zero-width filter, let alone not a practical possibility.

Think about the Fourier analysis on the single event - this will tell you the frequencies that get produced following the instant that a flat line signal changes to a sinewave shape. That instant in time marks the point at which a whole load of harmonically related sine waves begin and over time (if the initial signal remains a constant fixed amplitude sinewave) all the harmonics will decay to zero leaving just the sinewave.

If you repeat this like someone keying Morse code, the decaying harmonics will not necessarily fall to zero but will, inevitably be reinforced to a peak amplitude at the point when the sinewave is re-activated.

If you think about a square wave and its harmonics the harmonics are there right at the start of the signal activating - this should be no different to any non-pure signal beginning. Note that a pure sinewave never begins - it's been going since t = -infinite

Not the answer you're looking for? Browse other questions tagged communication interference fourier or ask your own question.

2
Atmel and coil close on a board - is interference an issue?
3
Multiple-terminal notification system to make calls between rooms
0
What could be causing this interference and how to eliminate it?
1
Interference from well pump pressure switch and microcontroller
1
WS2812b interference and bootup behavior
2
How do causality and stability affect the response of a linear time-invariant system?
0
NFC and magnet interference in a concrete piece