Does a logic-level P-MOSFET need a gate resistor?

I'm quintuple checking something I'm about to order from a PCB house, so bear with me.

I'm using a P-channel MOSFET to power on/off a GPS chip. The chip's grounding is complicated, so I prefer to control it on the high side. 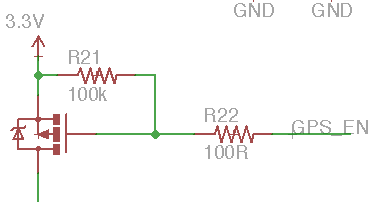 With the wire going to the bottom being the supply to the GPS chip, and GPS_EN going to an ATmega2560.

Can someone confirm that this is wired correctly, and that the gate resistor R22 is needed? I'm pulling the gate to the source voltage to default the switch to closed, and then driving it down throw GPS_EN to enable it. I'm going to use something like this MOSFET which has a Vgs of 1V. The ATmega runs off the same 3.3V, so there are no voltage differences there.

EDIT: The GPS is expected to have a draw of about 75mA.

The gate resistor is normally used with power MOSFETs to limit the magnitude of the current spike that can occur when a driver switches fast and has to charge or discharge a large gate capacitance. With a super fast driver with high drive capability the current spikes to directly drive a large gate capacitance can be measured in the Amps. A small resistor, such as the 100 ohm resistor that you show, can nicely reduce these current spikes to a reasonable level. An a reasonable controlled level current surge is not going to cause coupling and upset to nearby circuits.

Another reason to use the series resistor in the gate circuit is to keep the current surge within the max drive spec for a whimpy driver circuit such as a micro controller GPIO pin.

The MOSFET that you selected has quite low input capacitance (~75 pF) such that the MCU pin can easily drive the gate without the resistor to limit the current.

You mention using this part because it has a "Vgs" of one volt. Do not fool yourself with this spec. A Vgs at 1V only allows a typical drain current of 250uA to flow. You didn't specify the current requirement for the GPS receiver so limited comment can be offered. However you should study the data sheet carefully. Using the graph copied and shown below you will note that with the Vgs of 3.3V as offered from your microcontroller drive pin places the operating mode somewhere between the lower two curves on the chart. You can reasonably expect the available drain current to be be less than 300mA and to be largely limited by the drain-source resistance of the part. Unless your GPS unit runs on very low current (few mA) it is likely that the voltage level seen at the GPS unit supply pin will be less than the 3.3V that you would like to see. 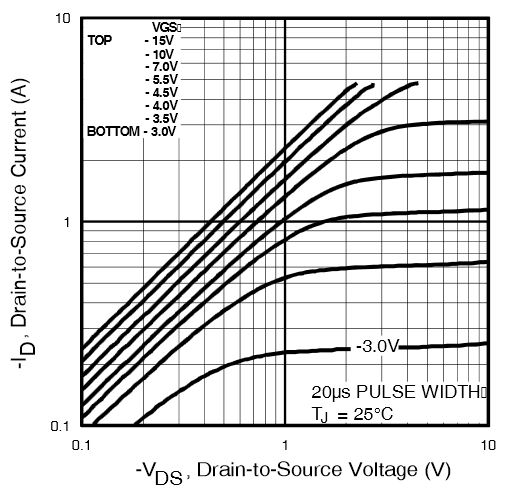 That MOSFET has a Threshold Vgs of 1V, that means it begins to switch significantly at 1V.

It's Vgs is specified as +/-20V max. If you were worried about Vgs being 1V, and you were aiming to protect the device, then there is no need to do that, as it is 20V.

No, I don't think you need R22. It has some benefit, by protecting the ATmega2560 pin if you think things are likely to short to ground or power.

But it isn't necessary. The MOSFET gate has a very high impedance (and only 5nC of charge), so you don't need to limit the current, as you would with a bipolar transistor, and the pull-up resistor R21 is huge, so it'll make no difference there.

"I'm pulling the gate to the source voltage to default the switch to closed" R21 will do that for you if you 'tristate' the ATmega2560 pin. It'll do no harm explicitly driving it high.

Having said all that, you could simply replace R22 with a 0ohm resistor and leave the board as it is.

Edit:
As Michael Karas wrote, it will likely conduct enough. However, as you can see from the Drain to Source current, it is not fully switched on.

Fig 6 in the data sheet shows the 'flat' on the Gate Charge curve at close to 4V. So it doesn't look fully turned on at 3.3V from that either.

There really doesn't seem much point using that device unless you have little choice. If it is exhibiting enough resistance to limit the current at 3.3V to under 250mA, then it is going to drop more of the voltage for the GPS, which might impact its behaviour, and the MOSFET will warm up, worsening its properties.

I'd look for a P-MOSFET with Rds specified for 2.8V or less.

Looking at IRF, who make other devices in the same micro3 package (and thus avoid redesigning your PCB) they let you search for Rds(on) for parts which switch at 1.8V or 2.5V in the same package, for example IRLML6401, IRLML6402, IRML2246, IRML2244.

You have to add those Rds(on) 1.8V and 2.5V parameters to the search by hand, they aren't there by default.