I want to do some experiments developing brushless DC motor control hardware, and maybe wiring my own motors for my own edification. LiPo batteries aren't convenient enough, and I want current-limiting protection against shorts or failure in my electronics or motors.

I would like a bench power supply which lets me set the current limit, in order to reduce the chance of damaging my electronics or motors. The aim is to emulate LiPo batteries, but with a user-defined current limit. For the sort of things I expect to do, 40A should be plenty.

Unfortunately, the sort of equipment sold by electronics distributors is unacceptably expensive. 40A Bench PSU's seem to start at 500GBP, which is too much cost for a 'hobby' project when motors and electronics are under 50GBP. e.g. Farnell

So I am looking for a cheaper solution which would provide over-curret tripping (like an electronic fuse).

There are lots of switch mode power supplies which claim 12V at 40A or more, for around 50GBP. 12V is close enough to 3LiPo's that it is an acceptable compromise.

A real bench power supply limits the current, and that would be ideal. However, I don't see a way to achieve that at sub-100GBP. Something which rapidly turns off power when it detects over-current, would be an acceptable compromise (unless I am missing something).

I could make an over-current sensor using an off-the-shelf current shunt measuring chip, and a microcontroller. I would 'dial in' my required current limit using a suitably tasteful human interface. It would measure the actual current, and signal an over current measurement, which needs to disable the power supply.

I am not sure how fast switch-off should be. I expect, say, 20ms (1 cycle of UK mains) would be good enough (500W for 50th second sounds survivable). I would like faster, but I am assuming I might need to switch the mains input power off. I would much prefer a solution which does not require me to control the mains input.

I am happy to put fuses in the line too, but I do not believe they are flexible enough, or convenient enough to be the primary current limit

I had imagined some switched power supplies would have an "enable" input, but I haven't found any so far.

Edit: Q1: is no longer relevant
The proposal is to 'disconnect' the PSU power from the BLDC driver after the PSU, using a suitable implementation of an electronic fuse.

Q1a. Will a rapid (couple of ms) disconnect of the PSU from the reactive load create a problem that might damage a switched PSU?

Q2: There is going to be a lot of quite high frequency modulation from the motor control PWM, as it switches power to the motors (I am guessing in 100's of kHz). Is it likely that this will significantly effect a switched power supply, and maybe even make the whole idea unworkable? Might a simple fix, be several mF of capacitors, or is it more complex than that (i.e. it'd need a tuned circuit, Edit: or adjust motor PWM to work around the power supply)?

Edit Q3: was "I assume the current shunt should be on the high-side. Is that correct?"
Response:
Commercial RC ESC's don't care because they are designed to work off batteries.

However, using a high-side shunt should make experiments and test-rig measurement a bit easier, by maintaining a ground reference.

You want a power supply that reasonably regulates voltage and can put out 1/2 killowatt at 12 V. That's going to cost some money one way or another. If you add to that current limiting (current regulation) and adjustable voltage, it will cost even more money. These things take some engineering to do well, safely, with regulatory approval, and the volume won't be that high. That all means a commercial product that does all that will cost real money.

If you are going to draw 40 A, then maybe you should be using a higher voltage, like 24 or 48 V. 40 A is going to require thick cable and will otherwise create hassles. You can probably deliver and use 10 A at 48 V more efficiently than 40 A at 12 V. Note that the issue around efficiency isn't so much wasting the power, but dealing with the heat the wasted power causes. A 90% efficient 480 W supply will cause about 50 W of heat.

I'm am doing a project right now that includes two electronic fuses. A microcontroller is watching the current sense signal every 10-20 µs in a periodic interrupt. If the current is above the trip point, a counter is incremented. If below, the counter is decremented unless it is already zero. If the counter reaches a particular level, which means the current has been high for some pre-determined amount of time, then the output is shut off for two seconds.

You need to set the trip time long enough to allow for inrush as power on. Or, you apply the algorithm differently at power on. Right now I am using a flat 2 ms for one supply and 750 µs on the other, but that one does a soft start during which the fuse is handled differently.

20 ms seems like a long time, but is still faster than most real fuses take to blow. I'd look at the current profile at power on, and set the fuse a little longer than that takes.

You don't need extra fast switches after the current sense resistor. At most, they will switch once every two seconds, or whatever you set the fuse recovery time to. You don't want to make the switching time so slow that significant heat is dissipated in one transition, but a few µs as apposed to the more normal few 10s of ns should be fine.

Here's a low-side fast electronic fuse with a trip point adjustable from zero to over 40 amperes.

The LTspice circuit list is here in case you want to play with the circuit. 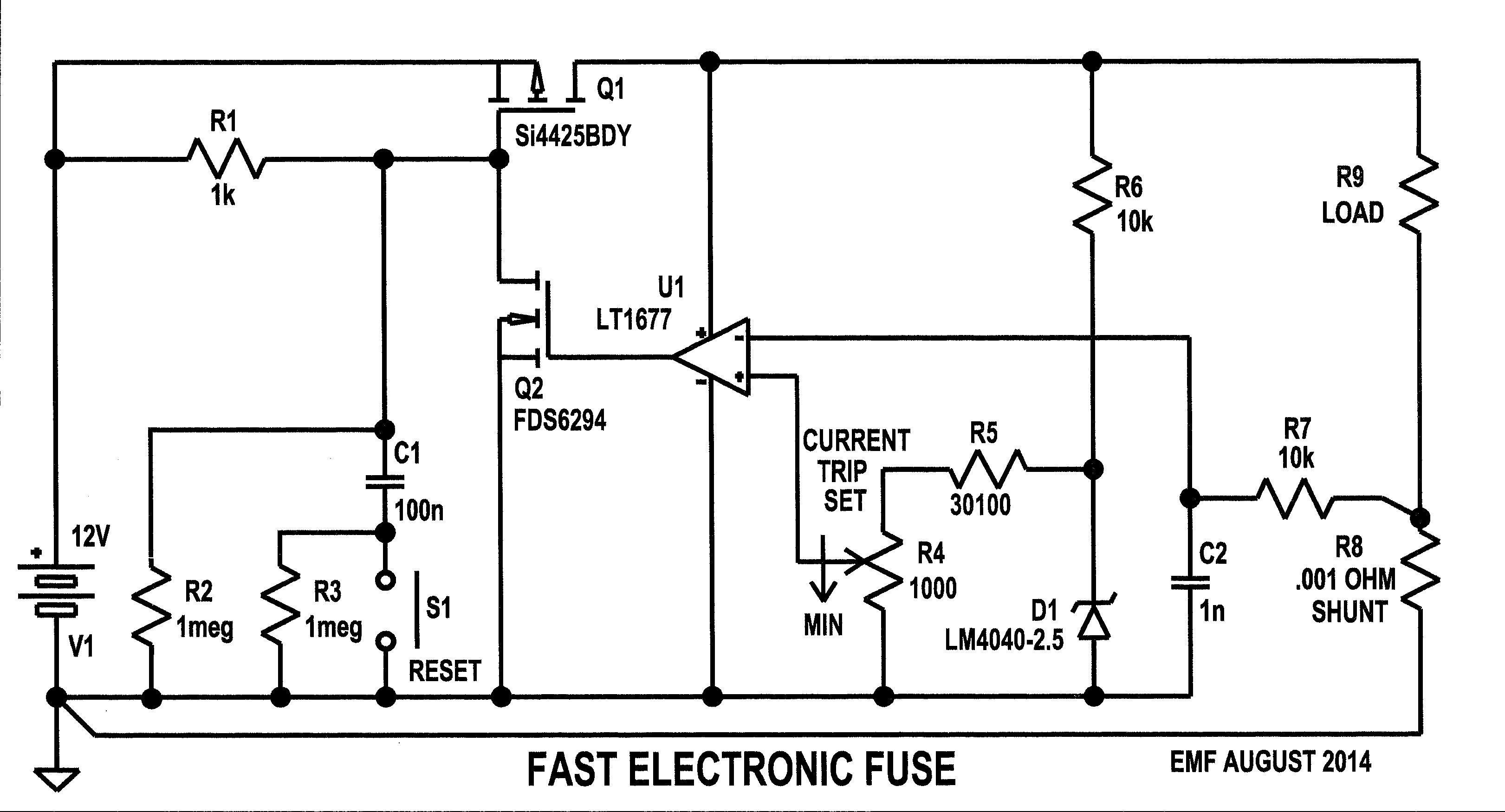 A PSU with adjustable output voltage is very useful for simulating different battery voltages (eg. 11.1V, 7.4V) and to compensate for voltage drop under load.

1/ You can build an adjustable external current limiter, and then you don't need an enable for the PSU itself. An external limiter may operate faster and provide better protection for sensitive circuits.

2/ Adding several mF across the output does help to soak up ripple (I used Sanyo OS-CON capacitors for lowest ESR). When running the motor at part throttle it may feed current back into the PSU, which will raise the voltage slightly. You can compensate for this manually if the PSU has adjustable output voltage.

3/ RC ESC's are normally powered by a battery and don't need to be earthed, so the shunt can be on either side. A low-side shunt may be preferred as the sensing circuit can then be referenced to the negative rail.

Not the answer you're looking for? Browse other questions tagged microcontroller pwm switch-mode-power-supply lipo brushless-dc-motor or ask your own question.