The details are hazy as I recollect this from my nipper days.Many, many years ago.

Is this feasible or was it perhaps an April fool’s article that I swallowed hook line and sinker in my youthful naivety.

There is a modern reason for this question.

Due to country wide cable and transmission tower spar actual theft. We are looking at placing modules with a gyroscope and Wifi module to form a mesh that will report if a tower is being “attacked”. Of course I will still have to test if the electronic gyroscope is sensitive enough for this. But one of the problems is going to be, how to power the unit? Solar will require an extra solar panel and battery. If I could tap into the radiated energy from the actual transmission line, great. Many modern SOCs don’t require much power and can sleep most of the time.

To clarify our needs. We are looking at building a device to sense if parts of the metal tower are being removed by scrap metal thieves. If too many parts are removed from the tower. It will buckle and earth the line. This is still at the feasibility stage. 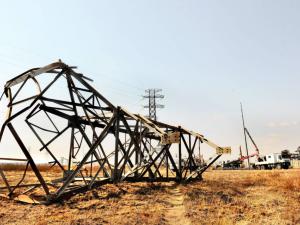 Is this feasible or was it perhaps an April fool’s article that I swallowed hook line and sinker in my youthful naivety.

Entirely feasible.
Farmers were occasionally charged with power theft in this country (New zealand) in the past. I haven;'t heard of a case in a decade or few - maybe they are getting cleverer at it :-).

This is the same principle as used for "IPT" / "Inductive Power Transfer as seen in phone chargers, industrial monorail powering, electric vehicle charging and much more.

I started to say that if the pickup coil was symmetrical with respect to two phases that were perfectly balanced that you'd get zero pickup, and then suddenly realised that I've always done IPT with essentially a single phase, and that with a 3 phase system with 120 degrees phase separation you should get the advantage of the full load current even if the two phases were fully balanced.

Energy Harvesting from Electromagnetic Energy Radiating from AC Power Lines - FAR more energy can be obtained than they achieve.

Online vehicle transfer - I do not have access to this paper but it is probably at least relevant as it will have examples of dual linear conductors and a pickup coil.

Mythbusters getting it wrong 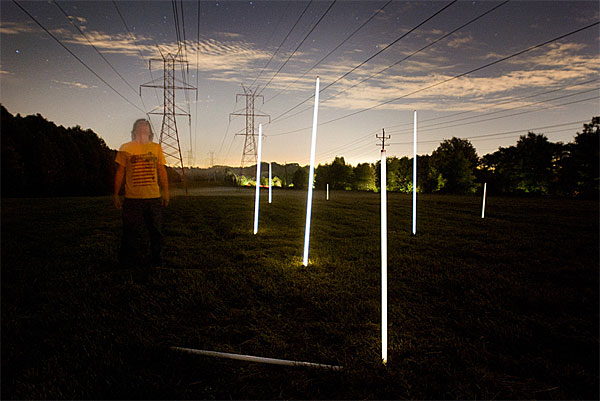 In my final year (1965) of my studies for my electrical engineering degree, I undertook a project on behalf of the then New Zealand Electricity Department to investigate the feasibility of extracting power from a 220 KV three phase transmission line in order to power a radio repeater located in the Southern Alps of New Zealand's South Island.

The manual computations for just one possible location of the pickup conductor took approximately four hours, accordingly, a number of programs were written in Fortran IV for the university's IBM 1620 computer to perform the calculations at each point in a grid in the plane perpendicular to the HV conductors.

The principal results were that extraction of sufficient power to run a radio repeater was feasible, however the pickup wire needed to be as close to the HV conductor as regulations and safety would allow (one had to allow for additional sagging due to the weight of snow on the conductors). At this point, the electrical potential was high (about 20 kV) hence an instrument potential transformer was used to deliver about 230 volts to the load. Some inductive tuning out of capacitive reactance was needed to improve voltage regulation. Following this computer based investigation, NZED engineers and technicians carried out field tests which confirmed the conclusions drawn by the study.

One interesting side note is that the calculations involved inverting a 4 x 4 matrix. The 1620, as I recall, took about 20 seconds to perform this task. My current desktop computer will invert higher order matrices in a fraction of a second.

The computer programs I wrote back in 1965 no longer exist, but I am presently trying to re-create them in order to compare execution times.

Yes, it's feasible (although entirely illegal - unless you work for the power company...). It's just an air-cored transformer. Get a coil into the magnetic field radiated by the transmission line and off you go.

That said, I'd do some sums and experimentation before hooking any electronics up to the output; you don't want to feed 10kV into your 3V embedded system...

Electrostatically Harvesting Power from High Voltage Power Lines. Note from author: Please do not try this experiment without a through knowledge of electricity! Please understand that it is illegal to take power from power lines. This is an experiment only.

If you run a single wire along a high voltage power line, (= or> 340KVAC), you will harvest a fair amount of voltage at micro amp levels. WARNING: KEEP AT LEAST 30 FEET FROM THE HIGH VOLTAGE LINE!! DO NOT DO THIS EXPERIMENT ON WINDY DAYS!! The longer the parallel wire, the higher the voltage and amperage you can collect. Run your (antenna wire) parallel to the power line in the trees adjacent to one outer phase of the power line. The higher the wire, (antenna), the better. Use small gauge bare wire hung from fishing line for insulation and support. Run at least 200 feet of bare antenna wire. 400 feet equals twice the power collected. Use a fishing pole and weight to put up the wires in the closest branches of the trees next to the HV line.

WARNING, DO NOT TOUCH THE ANTENNA WIRE! YOU WILL GET SHOCKED! I recommend two pairs of rubber gloves and good boots for this. Ground the Antenna wire while you work until the transformer (s) are installed and you are ready for power. Provide a single or several 5 foot copper-plated ground rods at your termination point for the transformer high voltage return to ground. More grounds are better. The ground completes the high voltage antenna circuit.

The trick is to present a minimum load to the antenna wire and to step down the electrostatically induced voltage. We need a very high voltage transformer to do this. A ham radio plate transformer rated at 10,000 volts works good. Neon sign transformers work well. You can use several used oil burner transformers with the secondary in series. They are 10 KV each so you can make a 50 KV secondary with five of them. Much better! Remember, the higher the transformer ratio from the high side to the low side of the transformer the better match you will have to the source (the power line antenna). We then connect the high voltage transformer secondary (HV) winding to the antenna and the ground. Separate transformers MUST have the 120 volt leads in parallel and IN-PHASE. You have created a capacitive-coupled step-down transformer. Place a 4 watt, 120 volt light across the 120 volt terminals of the transformer. If the light pops and you measure a higher voltage, you may add another single transformer to get to the voltage you desire from the HV transformer (s). You need to measure the AC voltage out of the HV transformer primary and find a 120 volt transformer for that voltage. Example: 600 volts out requires a 600 volt secondary and a 120 volt primary. Place this step-down transformer after the HV transformer. You may also ground the far end of the antenna wire to create electromagnetic coupling to the power line. No other circuit changes are required for this. Bring along some different wattage/voltage lamps, a car battery charger and small battery and some small AC motors to see the power you have collected. Have fun! Author: I am purposely not saying I ever did this. Work safely and remove the antenna when done so it will not blow into the high voltage power line.

Here is another thought: You can make your device a live tank device that clamps to the line its self and operates with a current transformer. Your whole device would operate at line potential. You would not need to include insulators for mounting (which are expensive and not trivial to design/produce). From there you could do some sort of motion sensing or video looking down at the ground around the base of the tower.

You would want to filter our line vibrations to keep from causing a bunch of false alarms. There are some IEEE articles on the types of frequencies power lines vibrate at due to wind loads.

From there you can relay the data off via radio, fiber, or PLC Modem.

Doing it this way allows you to design a greedy system that never needs to operate in a sleep or low power mode. You don't need a battery (if we assume these transmission lines are always carrying a few amps of current), and you don't have to worry about any capacitor charging schemes. You just need a coil, a rectifier, and a DC/DC converter - then you are in business.

This type of design is also inherently immune to lightning because there is no ground path. You just need to design to protect your system to shunt current spikes that could be observed due to switching, faults, and lightning (if the current passes through the primary of your CT en-route to an arrester.

The downside: Maintenance and installation are tougher. A lineman will have to bond to the line to install it. Otherwise it needs to be hook stick installable.

Regardless of how you design your system: Look into the SCADA protocols to the utilities you market to already use. If you can use an IEC61850 or DNP3 library and the utility can directly integrate your tool with their SCADA system it will be more marketable. Your customers would likely be more receptive of something that ties into the system their dispatch center already uses, rather than some new piece of software they have to run on some machine in their central office.

Not the answer you're looking for? Browse other questions tagged power high-voltage mains transmission-line or ask your own question.

8
Can the wire of a high voltage power line be used as the primary coil of an air cored transformer?
31
Stealing energy from radio towers or power lines
9
How would an electric company detect wireless theft of electricity?