What is the purpose of star pcb?

I'm fairly new to electronics, and I was recently looking at some LEDs listed for sale online. Some LEDs were mounted on "star pcb": 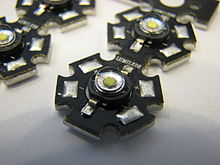 From the picture, it looks like there are 6 connections. I'm pretty sure the LEDs just have 2 (an anode and a cathode).

Can someone explain the purpose of the other connections, or what the star shape pcb is used for? I tried googling, but all I could seem to find were more star pcb items for sale.

I assume you are looking at a unit such as this: Digikey link. The "circuit board" is actually a heat-sink heat-spreader to draw away the heat from the LED module in the middle. As you can see in the photograph, half of the pads are labeled + (anode) and the other half are labeled - (cathode). So yes, there are actually only two terminals.

These are not usually ordinary PCBs, but rather metal-core PCBs. Rather than a fiberglass-epoxy composite material like FR-4 as the core of the PCB, the core is made of aluminium or sometimes copper. This has the advantage of far better heat dissipation which is a concern for high-power LEDs.

Making good thermal contact to the thermal pad is tricky because it's so small. The star PCBs make it a lot easier.

As for why these star PCBs have as many as six pads when an LED has only an anode and cathode, I suspect it's an issue of cost. There are RGB LED modules which may have three LEDs on one die, and thus six connections are required. It is cheaper to manufacture just one PCB that can work for many kinds of LED package.

This star pcb board is also used for RGB LEDs so it gives the flexibility of breaking out all of the anodes and cathodes of each individual LED. Since one board will work for both RGB's and normal single color LEDs it's cheaper to just design one board that works for them all.

Here's an RGB LED with the star pcb.

4
Can I use LEDs without PCB?

1
Modifying a digital LED thermometer kit to drive larger 4" 7-segment LEDs?
3
Would I need a star topology with a dedicated ground plane?
4
Can I use LEDs without PCB?
11
What component does the 'coupon' label refer to in terms of PCBs?
2
Issues with NPN Transistors and RGB LEDs (Common Anode)
3
Are there dangers to humans from PCB/Circuit Corrosion?
9
what is the purpose of having a "thru cal" on RF PCB?