I'm having trouble to identify this (presumably broken) part for replacement: 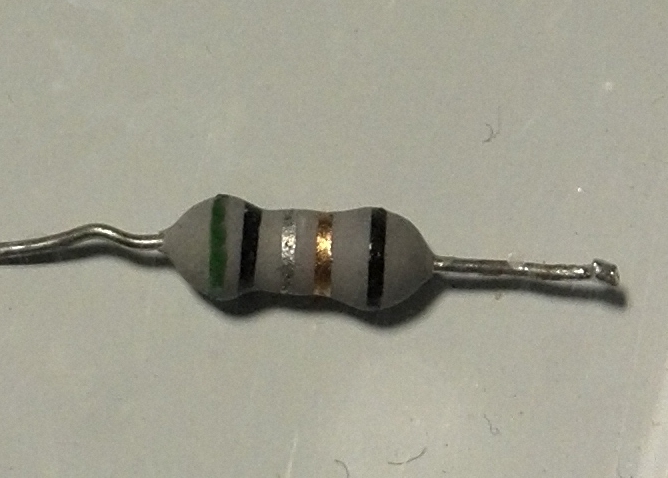 It was used in a broken LED power supply, with 220-240 V AC on the input and 120-200V DC on the output. I suspect this part is broken, because there is always 230 V across it. One side of it is attached directly to the mains input. Its resistance appears to be infinitely high (measured resistance up to 20M, max. range of my Ohmmeter).

It looks like a resistor, but wikipedia tells me it could be a capacitor as well (source: http://en.wikipedia.org/wiki/Electronic_color_code#Capacitor_color-coding)

I have tried to figure out the value and I came out at a 1000V - 0.05 Farads capacitor, but I find this hard to believe. Can anyone confirm? Thanks!

I'll be an outlier here and guess that it's a (blown) 0.5A "pico fuse" style fuse, and I'd be pretty sure if it's the first thing connected to the mains wire.

Break it apart you'll quickly see what its made of (and can easily rule out inductor, if there's no copper wire inside). A fuse and a resistor may not be easy to distinguish.

If it is a fuse, and if it's blown, there's a significant chance other stuff is blowed up good. Poke around and check the power semiconductors and diodes.

Edit: For those who have little experience with Asian manufacturing, here's an example of the type of fuse, mostly supplied by Chinese manufacturers:

The 'cement' finish in the OP's photo (rather than the smooth lacquer you'd expect on an inductor or resistor) is another not-so-subtle clue as to the functionality.

With the silver and gold bands being where they are, it appears to be a four-band color coded resistor.

With the first band being green, the second band brown or blue, the third band silver and the fourth band gold, it would be either a 0.51 or 0.56 ohm +/- 5% resistor.

Judging from the body's rough finish I'd guess that it's a power resistor, and the fifth band - while not standard - is the manufacturer's mark denoting either power or voltage rating.

Not the answer you're looking for? Browse other questions tagged capacitor resistors components identification or ask your own question.