How is current split with two parallel LED's?

I have two LED's in parallel with different forward voltages, and want to know how much current flows through each of them. They have one series resistor connected before being split. Like so:

As LED's don't follow Ohm's law, I'm not sure how to calculate the current through each LED. I thought I should treat the LED's like voltage sources and apply KVL loops, but I'm still stuck.

If two LEDs with different forward voltages are connected as shown, then for idealized electronic parts, the LED with the higher Vf will allow no current through it, and will not light up at all. The LED with the lower Vf will be the only one lit up.

To understand this better, note that the voltmeter as shown above will read 2.4 Volts, the forward voltage of LED1, and that is insufficient to light up LED2.

To calculate current drawn from the battery (first diagram in the question), the voltage drop across the 100 Ohm resistor passing said current, must equal the difference between supply (5 Volts) and Vf (2.4 Volts):

LED1 will also thus have 26 mA flowing through it, and LED2 will have 0 mA.

When using real world components, the behavior is marginally different. Note the V-I graph for this 2.7 Volt blue LED: 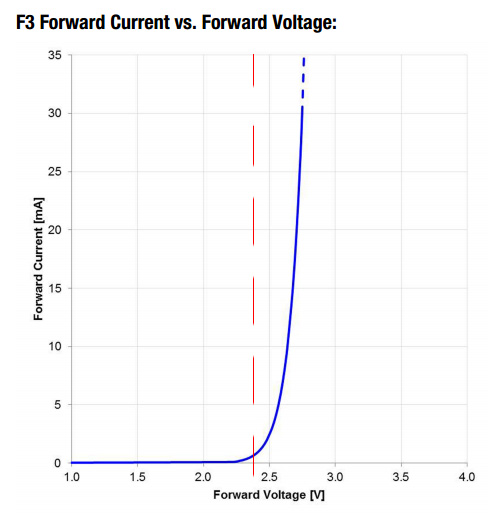 Even though the datasheet indicates a forward voltage of 2.7 (typical) to 3.6 Volts, the actual current it will allow at 2.4 Volts, shown by the red line, is just under 1 mA going by the graph. Of course, the graph is an approximation. Even two LEDs from the same production batch will have slightly different actual V-I curves, with temperature variation adding yet another set of variables.

Be that as it may, this ~ 1 mA current through LED2 will reduce the current drawn by LED1 by approximately the same amount, if one were to simplify things somewhat. The exact currents through the two LEDs can only be determined experimentally, due to the environmental and manufacturing variables affecting the various parts.

If the two LEDs were absolutely perfectly matched to each other then they could share the same resistor. Because they are not perfectly matched in VI characteristic one might appear a little brighter than the other because it will tend to hog more of the current.

To avoid this, it's usually deemed preferable to use a resistor for each LED but, despite this, some LEDs will just appear brighter but (statistically) less so than if the LEDs all shared one resistor.

Often the spec sheets will contain IV plots, you may get an idea by matching the voltage and adding the currents together and doing a few successive approximations. If the LEDs are of different colors, for example, they will have significantly different forward voltages, and the higher-votage (usually shorter-wavelength) LED will pretty much be off.

In general, you will need to solve a system of equations:

where f1 and f2 are functions expressing the respective IV characteristics of the LEDs. You can find an approximate solution using the plots, or, if you're interested, you could use a mathematical model (e.g. see Diode modelling article in Wikipedia) and find a symbolic solution or an approximate numerical one, using essentially the same successive approximation method as you would with the plots.

On a more practical note, you need to use separate ballast resistors if you want both LEDs to work. You may also be able to feed LED1 (2.4V) off of LED2 through a small ballast resistor, especially if LED2 is a high-britghtness, high-current diode.

The "cheater" answer is to put a low ohm resistor (eg 1 ohm) in series with each led, measure the voltage across each and calculate the relative currents with good ol' Ohms law. 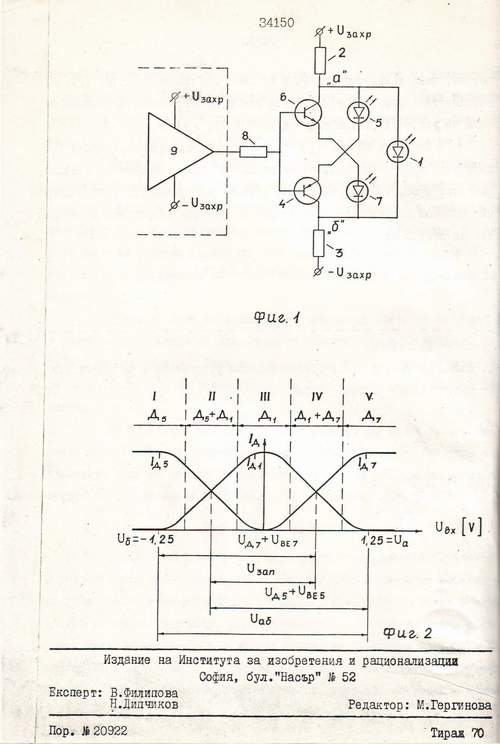 Using the circuit above, you will need to know three values in order to determine the current value.

Once you have obtained these three values, plug them into this equation to determine the current :

Not the answer you're looking for? Browse other questions tagged led circuit-analysis or ask your own question.

43
Is paralleling diodes a bad idea?

4
Powering RGB LED's and using a PWM chip; series or parallel?
3
Calculating LED current flow in a parallel circuit
1
Do these LED's have a constant current driver built in?
0
How to find voltage across resistors with only current sources?
0
How Would One Analyze a Circuit with Two Voltage Sources?
2
Parallel circuit with LED on one path and resistor on the other
5
Understanding "Current Draw" in terms of "Ohm's Law"
2
How to solve a LED-resistor parallel with a resistor?
1
Finding current through LEDs in series-parallel circuit
1
What happens when a resistor is in-between two parallel resistors?