I'm having a little trouble understanding this worked solution.

My understanding of superposition is that we "turn off" every independent power source except the one we plan on analysing, then we superimpose all the individual results to get the real result. But it's in the nodal analysis when we leave the current source on and turn the others off that's getting me.

The solution implies two node voltages when to me there are 3 junctions/nodes. They seem to just follow the current through the 8 ohm and the leftmost 4 ohm resistors all the way to the ground. Is this because there is no branch between the ground node and the other node voltages?

Sorry for all the questions, but when we remove the current source, I've never understood how the remaining open circuit works. Do we simply disregard the wires that remain in figure (b)? If yes, why do they leave it there?

One last thing I am little shaky on choosing at which junction the make a reference node, is there a reason the solution chose the one it did? 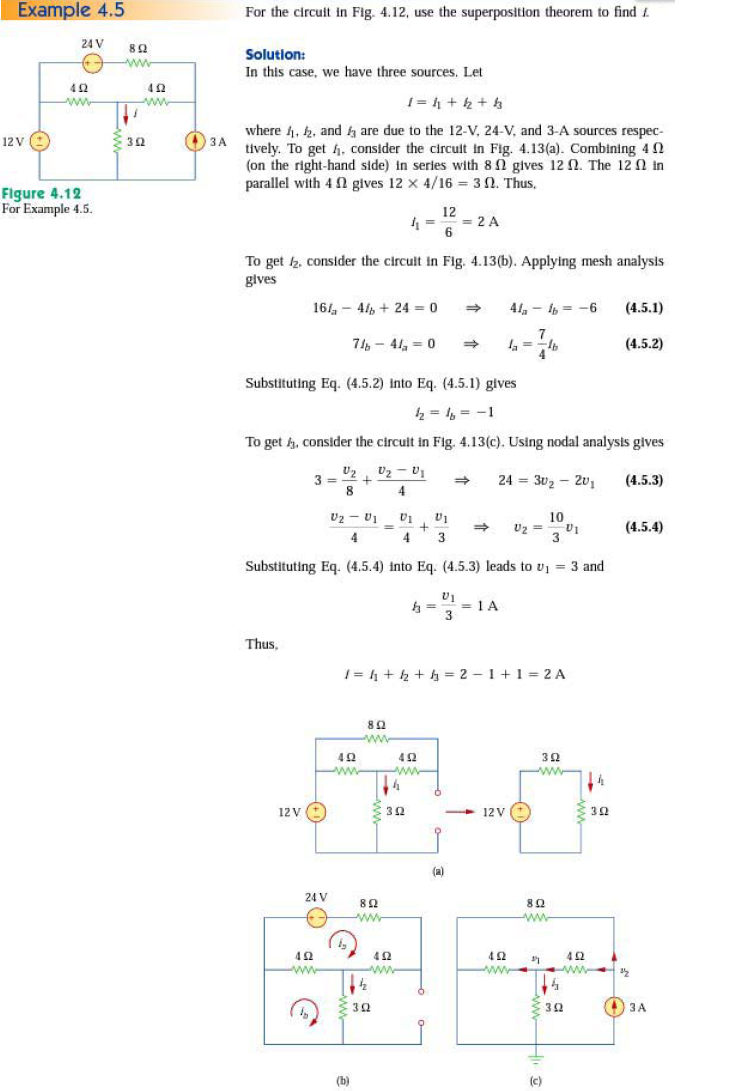 When you "turn off" a current source, you are essentially inserting a current source of 0A. This is an open circuit, as the open circuit works as an infinitely large resistance, therefore no current is going to flow there. You can simply ignore those wires. The fact they left them in is probably meant to make it visually easier to understand.

In figure (c), there are indeed 3 nodes: one in the middle (v1, common node of the two 4\$\Omega\$ and the 3\$\Omega\$ resistor), one on "top" of the current source (v2), and the one connected to the "bottom" of the source. They decided to make it the reference node, valued 0V for easier calculations. They could have chosen any other node for this, but generally you tend to choose the one on the bottom of your schematic. In most cases, this provides you the easiest solution.

And lastly, you can choose whichever type of analysis you want, with a little practice you're going to feel which one is easier in a given problem.

3
How do I decide which method to use in circuit analysis?
2
applying nodal inspection technique to supernodes with dependent sources
0
Need help designing a current controlled source in PSpice?
3
Nodal analysis for current controlled current source
0
Should I assign currents to voltage sources in my circuit analysis
1
Nodal analysis - what to do when a supernode spans entire circuit
1
Is there a way to solve this circuit using Nodal Analysis?
0
Can we use nodal analysis without any information about the current
0
Resistive circuit analysis with dependent current and voltage source
2
Homework Help with Node Voltage