Can there exist a resistor that can deal with current reaching up to 1000A or 10x time that value, and beyond? What about heat dissipation when massive amounts of current is required?

You can make as high a current resistor as you like- just buy suitable chunks of manganin and give it a suitable shape for the value you need. For example, you can buy 8mm \$\phi\$ rod from here. Put one or more between copper blocks to get the desired resistance and power dissipation capability.

For example, these from Crompton, which are available up to 10,000A and have a voltage drop of 50 to 150mV at the rated current. 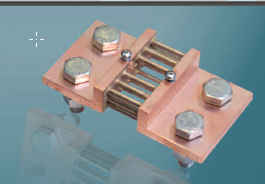 Although any metal, including copper, steel or aluminum, can be used to make a resistor, pure elemental metals (and steel) have quite high positive temperature coefficients so they make a pretty crummy resistor.

Sure. The example that comes to mind is oil-cooled resistors here's an example. I have never actually had to use one, but I remember the instructor in my Electrical Machines lab class rolling some out for us to use. I think we were using them as large rheostats to adjust the speed of DC motors.

The biggest problem is probably removing all that heat. However, bear in mind that sometimes the heat produced by a resistor is exactly the point. e.g., stovetops, baseboard electric heaters, etc...

High power resistors exist for many different solutions. The best fit will depend on your application.

On the extreme end aqueous electrolyte resistors(water with stuff added) can hold off hundreds of thousands of volts, handle very high currents, have low self inductance, are simple to build, and can sink extremely high pulse energies. The maximum energy deposited can approach ~100J/cm^3 under single pulse conditions, limited by the temperature change needed to boil the liquid. These are typically used as dummy loads in pulsed power applications or as charging resistors for very large capacitor banks where precision is not needed but the need to dump large amounts of energy is.

By changing which electrolyte is used, the amount per volume of water, and geometry, the resistance can be tailored to the application. The electrode material does need to be chosen based on the electrolyte used to prevent corrosion or plating.

Back in the early days of theatrical stage electric lighting they used salt water dimmers. Stone-simple to build: non-conductive cylinder, copper disk in the bottom, second copper disk on a pole. Fill with salt water.

Resistance is proportional to the distance between the plates (and the amount of salt), current capacity proportional to the area of the electrodes and how fast the water can be replaced. Obviously some empirical research is required, but you should be able to get almost any combination of resistance, max voltage and power handling.

Minor side effects include a small explosion hazard: H2 and O2 come out in huge quantities, just looking for a spark to re-combine into water again.

A common incarnation of huge resistors are also known as load banks for things like testing generators, they typically include some huge resistive element or array of them, plus some sort of cooling (EG a big fan).

I remember chatting to one of our power team guys about a towable load bank on a trailer being used to exercise one of the generators in a telephone exchange, it was basically a mid-sized trailer towed behind a 4x4 which looked like a big louvred box with a fan at either end and a few connections to hook up. I can't remember the exact numbers but it was around the megawatts the thing was busy dissipating into the car park.

My boss tells a story of the apprentice being dispatched to the local high street to buy all their cheap electric kettles to create a load bank for something they were testing, poor guy spent the rest of the week running round the car park emptying boiling water down the drain & refilling with cold!

If you were talking about shunt resistors that can pass hundreds of amps but have quite a low resistance, then some of the answers above show the sort of thing, usually made of copper or some alloy and cut to a shape (sometimes hand-trimmed or even laser-trimmed for fine adjustment). As they have a low resistance, provided they are physically big enough to handle the current they will not dissipate that much power.