I'm trying to design PCB traces for a 27512 EPROM chip. But its pinout for the higher half of the address bus seems completely illogical to me and I cannot imagine how should I lay out my traces for it. Here's how the pinout looks like: 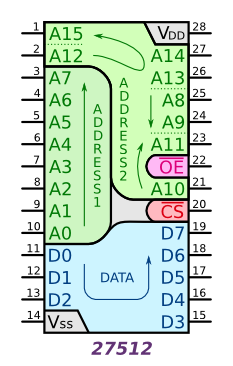 Other components have the data and address bus pins in order, so I need (and I would prefer) to keep it that way.

27512 has it in order, too, but only for the lower half of the address bus (A0..A7) and data bus (D0..D7); although the data bus goes around the bottom of the chip and around the ground pin (so I would need to trace it in some other direction or use a jumper wire to jump over my data bus).

This is really weird to me, and I don't know how to make it in order again (especially to keep up with the order of the lower half of the address bus).

Is there any clever logic behind all this jumping around? I cannot imagine that the designers of the chip just put the pinout randomly (especially when they kept the order of two other buses well enough). I'm more likely to believe that they had some particular sophisticated PCB layout in mind when designing it. But I also cannot see the logic behind it.

I also took a look at other EPROM and SRAM chips and they all seem to have this very same pinout design, so I guess there was some rationale to keep it that way. But the PCB layout for this particular layout isn't very obvious to me. Is there any standard way to lay out the traces for these memory chips I should know of? Because without it, I would have to make a lot of jumpers on my PCB (one-sided) to restore the correct ordering of the bus lines.

Perhaps the answer is simply historical carry over maintaining pin compatability (originally going back to the '08' chip - 1K ROM).

Compare the pinout with is its much older cousin the 2716 (EPROM) - a 24 pin chip. In the 'good old days' this was the basis for developing a lot of the earlier microcomputers. 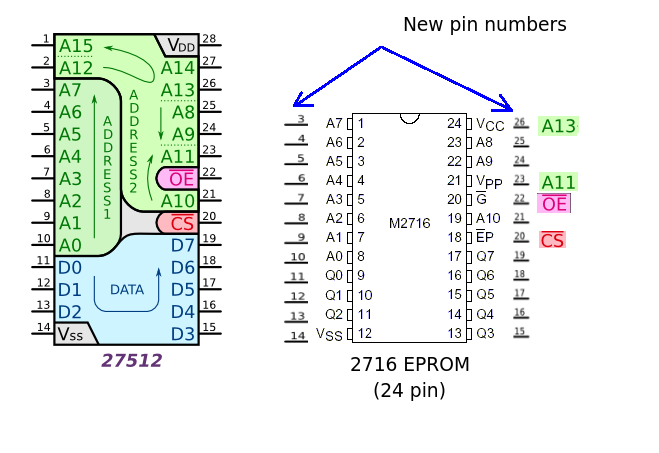 This effectively allowed older 24 ROMS and EPROMS (and RAM chips such as the 6116) to be plugged into the later (28 pin) designs.

As regards PCB traces (I'm assuming your using at least double sided) there is no problem with the order. You are simply connecting pin 1 to pin 1, pin 2 to pin 2 etc. by taking the (horizontal) trace between pins, remembering you have both sides of the board to play with. If you require the address bus in a particular 'order' bring out the horizontal traces from the memory block and use vias and perpendicular traces to re-order them.

Not the answer you're looking for? Browse other questions tagged pcb-design layout eeprom pinout or ask your own question.

0
Why do parallel memory chips in a DIP package have a disorganized pin arrangement?