I have this project where I'm meant to design a changing frequency circuit using schmitt triggers. It cycles between 2 frequencies. In the below circuit, pretending the not gates are schmitt inverters and ignoring the resistor and capacitor values, and letting not1 be of much much lower frequency than not2, should and output connected to not2 cycle between 2 frequencies.

IE, while not1 is low, not2 undergoes normal frequency oscillation based on it's charging capacitor C2 through R2, but while not1 is high, not2 charges at a faster rate via the added voltage through diode and R3.

Obviously buffering and whatnot would still need to be done on the output, but is the general design workable with tuning the resistor and capacitor values or not? If not, what improvements can be made? Thanks for any help. 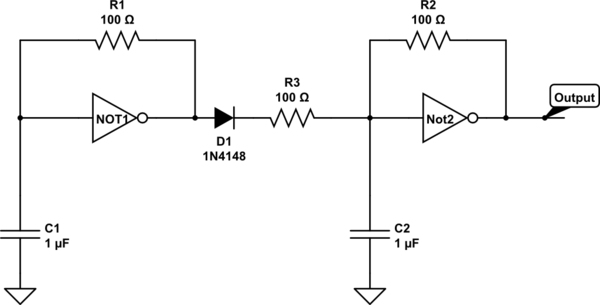 Design will generate dual frequency signal, but due to asymmetric nature it will change duty cycle more and it would be hard to obtain high hi/lo frequency ratio (precise parts needed).

There are other ways.

Second schematic was discovered while playing with CD4093 quad NAND schmitt. Drawback of it that its frequency ratio hardcoded by schmitt thresholds.

No.
As shown your circuit will tend to not do what you want.
BUT an extension of this method will.

What happens in your circuit is that when NOT1_Out is high D1 will cause the capacitor to charge faster when NOT2_output is high, and discharge slower when NOT2_output is low.
If R3 is somewhat larger than R2 this will have the effect of changing the mark space ratio but not the frequency. There will be some frequency shift but it will be a second order effect and not easily designed for. (Exponential charge and discharge rates vary with driving voltage so frequency is affected).

There are two (at least) methods that you can use:

(1) If an assymmetrical output waveform is acceptable, then placing a diode across R2 so that it conducts when NOT2_Output is low (Cathode to NOT2_output) will cause the NOT2_OutPUT_low state to be controlled mainly by the diode, so that NOT1 input will mainly affect the C1 charge time and so will alter the frequency. The output will be mostly high with a small proportion of the cycle low.

Here's a 2am quick & not very checked implementation.
Circuit in dotted box shows an "easier" method.

When Oscillator 1 output is low diodes D 2 & D1 clamp IC4 & IC5 in modes such that diodes D4, D3 block and do not pas Osc2 signal back to input.
When Osc1 output is high, diodes D2 and D1 block and Osc2 signal is fed back via Rs to oppose feedback via Ro2 and this slows the oscillator frequency.

Adding an inverter between IC6_out and Rg1, Rg2 and changing diode D4, D3 polarities makes oscillator speed up when enabled. IC3 is a buffer and not strictly necessary. Gate IC3 can be removed and connections to D2, D1 moved left one step to provide the required inverter. 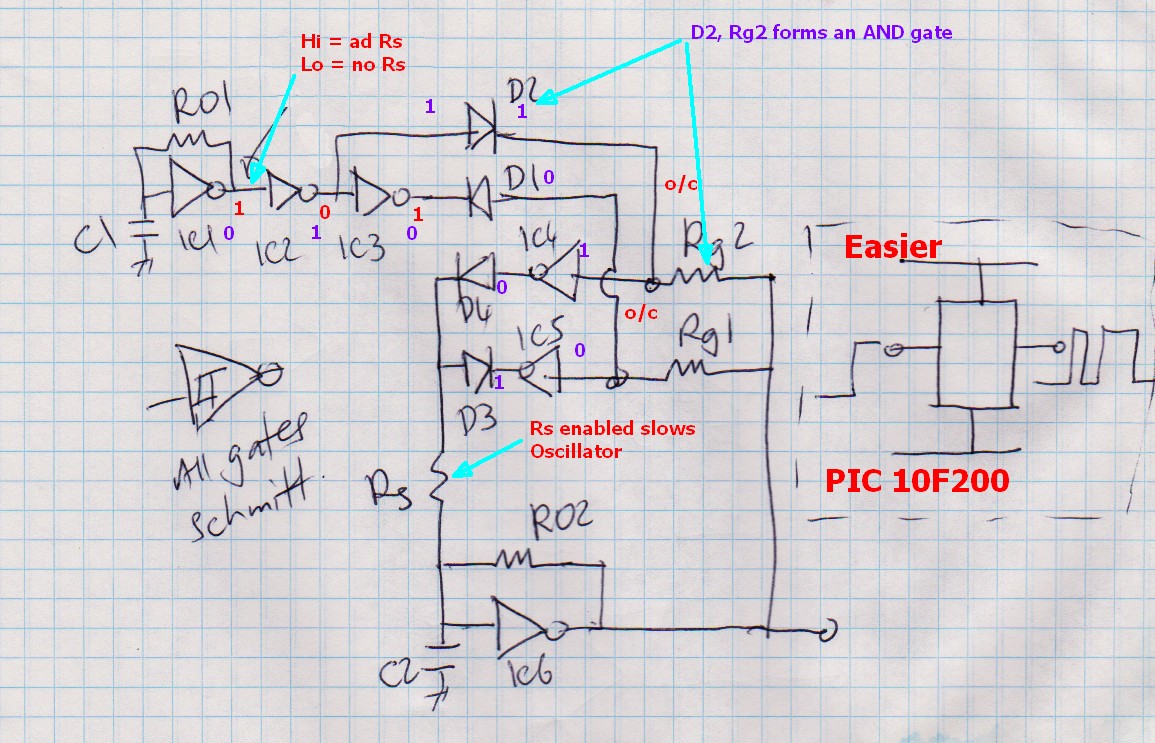 Thanks for the reply. I appreciate all the effort, unfortunately the frequency switching circuit needs to be as simple as possible, using as little components as possible. <5 schmitts, ideally 2-3, only as many other components as needed

A few minutes work gets a version of the above circuit down to
3 Schmitt inverters (no NAND gate so 1/2 pkg),
2 Capacitors (one for each oscillator),
4 Resistors (two for oscillators, 2 for blocking gates),
4 diodes.
Smaller is probably "hard" [tm].

To use only two inverters you have oscillators only so none or other use, so 3 seems a likely minimum.

Circuit at this stage is left as "an exercise for the student" as that is what this is about. I can add a circuit in due course.
Clues: Fast oscillator has standard feedback and also extra feedback resistor(s) that are diode connected, providing the ability to be gated off with appropriate signals. The slow oscillator supplies the appropriate signals. Diodes are used for isolation as required.

(3) An alternative to the method in (2) is to switch between 2 oscillators when NOT1 toggles. This circuit for blown bulb notification which I suggested to Yasmi for her motorbike indicator flasher uses exactly this method. Q1, Rd form the equivalent of NOT1 + diode, and an inverted and non inverted version of this signal is gated using D1 and D2 to control two oscillators. D3, D4, Rg form a diode OR gate at the output to choose the signal from whichever oscillator is running. An inverter could be used after the diode OR to buffer the signal.
You may be able to use one inverter for NOT1 oscillator and feed say D1 with it plus an inverted version to D2. You need 2 more gates for the 2 oscillators and perhaps one more at the output = 5 total (6 in a package).

Note that when D1 and D2 are use to block an oscillator in the off state it must have a polarity such that it does not pass through the output OR gate. Not hard, just a little brain bending to get right.

A package of schmitt trigger inverters can be used to solve a very large range of requirements. An amazingly powerful toolkit in one IC. 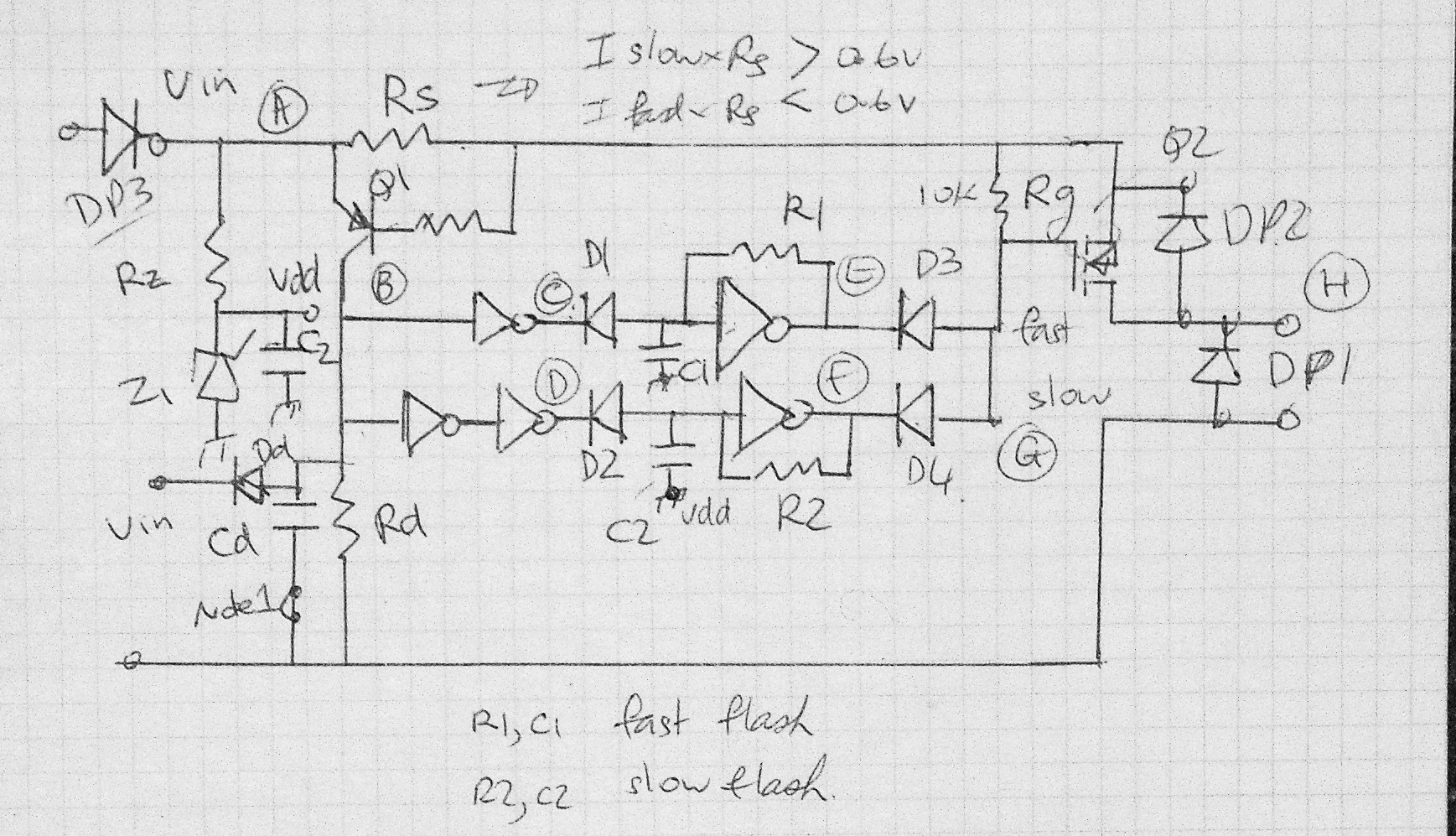 Not the answer you're looking for? Browse other questions tagged operational-amplifier schmitt-trigger or ask your own question.