Inductor value given in OHM/Amp

I've been trying to figure out the inductance in Henries from a schematic of a Rabbit Microprocessor development board, however, instead of finding an inductance value over the components in question, theres an ohm/amp value, I thought maybe it was the inductive reactance, but theres only DC in this circuit and most of the inductors are probably being used as filter elements. However , to add more confusion, in this same schematic, some inductors are stated in Henries while others are stated in Ohms/Amps.

*So how should I interpret an inductor whose value is in ohms, It cant be inductive reactance can it? *

I dont understand how is it related or is it simply a ferrite bead with a certain dc resistance? Here are pictures of the schematic im analyzing:

Here you can see one of the inductors in ohms 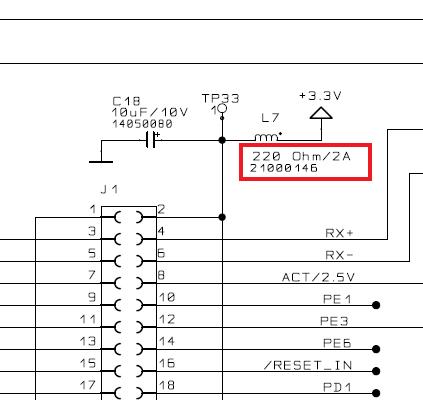 This second pic is also from the same schematic, while there is an inductor stated in Henries (nH to be precise) the other inductor is in ohms 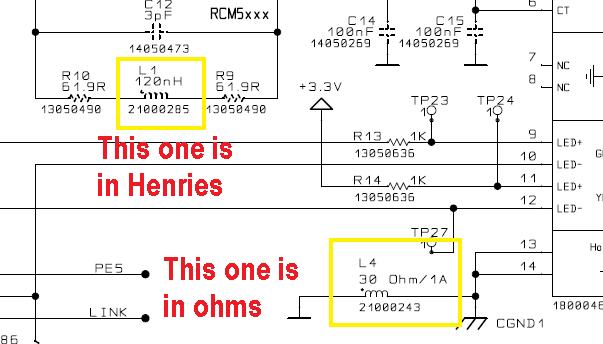 You're right in your assumption that those 'inductors' are simply ferrite beads. Some engineer has been lazy and didn't use a distinctive label/reference designator, although the ohms and amps do give it away somewhat.

Ferrite beads are characterized by their DC current rating and characteristic impedance at 100MHz, which is the ohms-value you read there. Their actual DC resistance is much lower, much less than 1 ohm typically.

Not the answer you're looking for? Browse other questions tagged resistance inductor inductance inductive reactance or ask your own question.

4
Ferrite bead for use for filtering a microSD card's Vcc
1
Testing high power inductors
1
Measure inductor coil's resistance using multimeter
1
Why is the Inductive reactance formula (XL=2πfL) not working for me?
0
Default unit for inductance
14
A story behind a weird inductor
7
What frequency is Ferrite Bead reactance usually given at?
5
Measurement of an inductor not accurate at all
0
How do I calculate the inductance value of an inductor in an LR circuit given input voltage, resistance and dI/dT at the moment a switch is closed?