Running single-phase through two or three windings of a three-phase inductor; why does the direction of the middle winding matter?

I have some experimental results that don't make sense to me, which appear to be related to the fact that all three chokes share a single core. For this question I'm going to label the terminals as A1, A2, B1, B2, C1, C2. 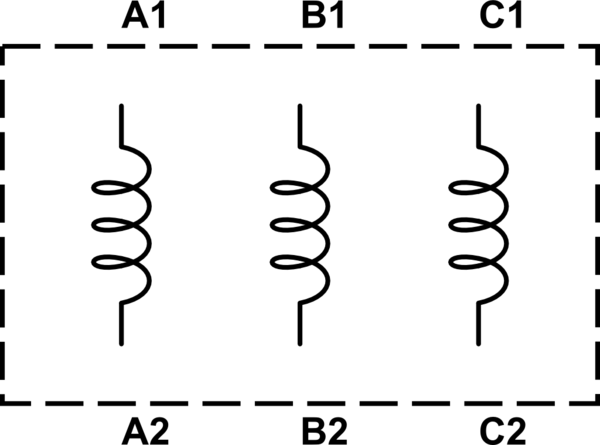 First test, I'm running single-phase current through the outer two windings; middle winding is left out entirely. Inputs are A1 and C1, load is a short across A2 and C2. 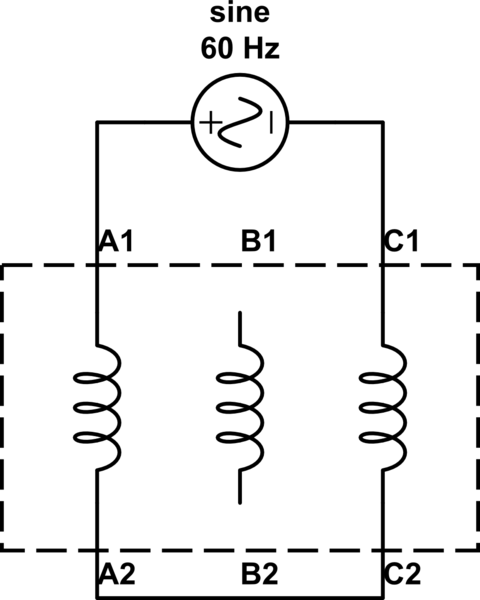 Measure the voltage and current across the input, and the inductance computes to be about 18 mH. No surprise there.

Now, suppose I want more inductance between source and load. I've got that third winding sitting there unused, so let's take advantage of it. Second test, inputs are still A1 and C1, but this time we short A2 to B2. Load is a short across B1 and C2. 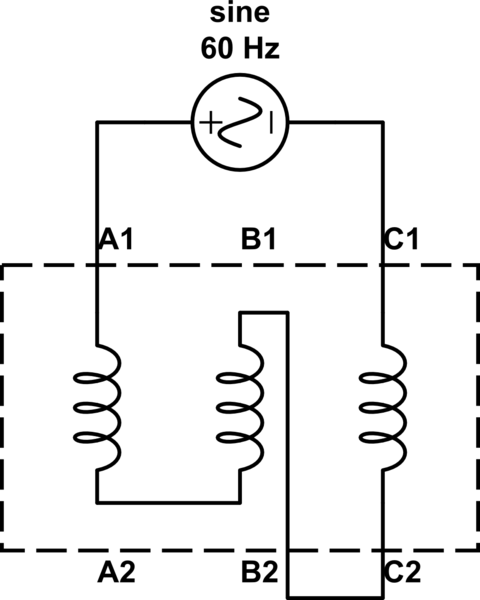 Inductance is about 22 mH, so we got about a 25% increase in total inductance. Not much surprise there. One might have expected a 50% increase (going from two windings to three), but I think you lose some of that expected gain due to the overlapping and canceling fields allowed by all three windings sharing one core. 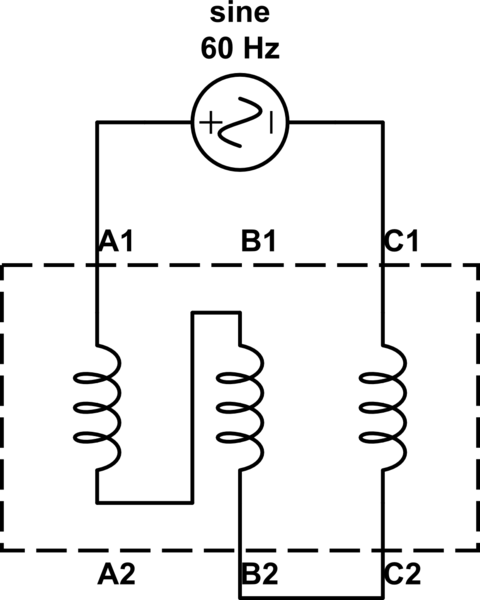 Inductance is now 27 mH, giving us a 50% increase in total inductance from our first test!

It looks to me that the middle winding is symmetrical with respect to the fields of the outer windings. I've been able to reproduce this with other chokes from MTE. Why does the direction through the middle core matter? Where's the asymmetry?

Because the 3 windings are on the same core they have mutual inductance. When hooked up in one direction the mutual inductance of coil B adds to the others, but in the other direction it subtracts from them. It acts like the secondary winding of a transformer, with the voltage induced into it either adding to the primary voltage or subtracting from it.

If coil A and B were both on the same leg of the core then the coupling between them would be close to 100%, so when connected in antiphase their inductances would almost completely cancel out. This configuration is sometimes called a 'non-inductive winding'.

However with the coils on different legs only half the flux induced into the core by coil A goes through B (the other half goes through C) so the coupling to it is only 50%. With half of B's inductance cancelled out it only increases the total by 25%, whereas when connected in phase it adds all of its inductance (giving the expected 50% increase).

If this was simply a three phase (transformer) inductor set-up - it would be designed as a DELTA transformer, with 3 secondary outputs.

THIS is just three reactor inductors.

ALL fitted onto a STAR CORE (yes a star core, even though it is in a straight line configuration).

AND - IT IS A SELF EXITING REACTIVE LOAD BALANCER

IT (looks) as if it is just a STAR transformer inductor set-up - but IT IS NOT.

IT - is a BALUN. A three phase balun to be exact. IT IS USED AS A CURRENT LIMITER ONLY.

... WHEN THERE IS A FAULT _ ONE LEG HAS MORE CURRENT THAN THE OTHER TWO - or visa versa (two have more current than the other)

Thus if any LOAD PHASE, or set of phases, faults then a HIGH VALUE short-circuit current FLOWS in two inductors, and the reactance created in the third inductor LIMITS THE CURRENT FLOWING in the two at fault.

Thus - the self regulating effect of the reactor, limits the fault current by creating a reverse current flow in the third inductor, which in turn restricts the flow of current in the other two cores

The reactance of the three inductors THEN operates as a type of BALUN CHOKE - limiting the fault current to manageable levels.

It does this by self inducing reverse EMF currents in the other two inductors that oppose the original fault current FLOW.

Running a single phase into TWO of the inductor/reactance (outer) coils, actually just creates a silly type of IN LINE inductive choke, that produces a magnetic reactance in the unconnected middle coil. Any attempt to interconnect the middle core, in the manner you are describing, creates a complete OUT-OF-BALANCE reactance. AS IT'S CURRENT TRIES TO FLOW IN OPPOSITE DIRECTIONS AT THE SAME TIME - creating a ZERO CURRENT FLOW - but with excessive STANDING WAVE voltage.

AND it thus also sets up harmonic disturbances into the primary supply network.

One that has both a forward and a backward reactance.

In one instance the current in ONE outer core is attempting to force a reactive current to flow UP through the middle coil, whilst the opposite (outer) core attempts to induce a downward movement of current in that same middle core. result - ZERO CURRENT at a maximum Standing Wave voltage.

As you will ONLY get weird results.

THERE IS ONLY ONE WAY - to wire a single phase supply over that reactance bank. INPUT the +Sine wave at A1 and thus feed the output of A2 directly UP into B1 - to then feed B2 directly UP into C1 and finally feeding the LOAD (to be driven by that single phase supply) between C2 - and the -ve sine wave input terminal . WHAT YOU WILL THEN HAVE - is a single phase (three leg) SELF-ENERGISING CURRENT-LIMITING inductive balun (as all this is - is a reactor bank designed to limit the inrush and fault currents to manageable levels, by way of a BALUN).

ALL cores driving a balanced (BALUN) reactance onto all other cores.

IT IS NOT A TRANSFORMER BANK - and no attempt should be made - to simple series (out of phase) any ONE inductor to any other (or two in parallel), to then attempt ANY interconnection to the floating third core.!!!

See CURRENT BALUN's - for the way a "current balun" (a REACTANCE BANK - such as yours) will ALLOW a working current to flow - in normal operating conditions, yet vastly increases it's apparent inductive REACTANCE, to limit fault currents, when out of balance currents flow in two of three BALANCED REACTOR INDUCTORS (your three cored inductor bank).

Not the answer you're looking for? Browse other questions tagged inductor impedance inductance three-phase single-phase or ask your own question.

20
How do I use a transformer as an inductor?
10
Saturation current of my inductor not agreeing with formulas
0
3-phase Inverter in single phase operation
2
Reset Winding in Single Switch Forward Converter - How To Dissipate Leakage Inductance?
0
Does the physical distance from electrolyc capacitor to inductor matter?
1
Multiple output flyback converter simulation in Advanced Design System
6
What do they mean by "short-circuited" here?
0
How can I test the rotor winding of a single phase brushless alternator on a generator?
2
Why is the coupling coefficient constant for different airgaps in a coupled inductor on an EE core?