I am trying to control a LED using a high-power 433MHz transmitter receiver pair, with transmitter connected to my Arduino Nano.

I can send HIGH to a data channel at the transmitter (it has 4 channels) and receive the HIGH input at the same channel at the receiver, successfully lighting up a LED. This is my current test sketch:

This works well, however, if I change the 122ms delay at the falling edge to 121ms (or anything below that) I have no output at the receiver. The LED doesn't light at all. It's the same for all channels, there's a sharp change at that very border between 121ms and 122ms (found the exact value by trial and error). At the transmitter/Arduino, the output signal is clear so it's an error with the transmitter or receiver. I've used other, much simpler/cheaper 433MHz transmitter/receiver pairs in the past with no such issue. At the rising edge (second delay call, the one with 100ms), there's another issue when I drop below 13ms. At exactly 12ms, the LED is unstable, it sometimes blinks as expected, but sometimes just lights up. Anything below 12ms, the LED is constantly high, not a single blink.

UPDATE: If I use _delay_ms instead of regular delay, I get about 1ms more room for both edges, but below that, it's still the same.

UPDATE 2: I've tried changing to different output pins on my Nano, both PWM and non-PWM ones. Nothing changes.

What would be the problem?

You need a bare transmitter and receiver pair with one channel. Photo is super regenerative receiver. You can use superhetrodyne type for better anti interference. Generally, these works up to a few kHz switching, put Hi in tx and Hi come out at Rx. 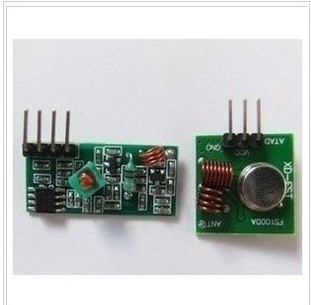 The one you got has additional encoder MCU. It read 4 key lines, wait 120ms for key debounce, so shorter input are ignored. It then send a coded message to the receiver where another MCU decode the message and send out hi /lo on 4 channels.

Your module is generally used inside these 4 key remote control (car door opener, etc.) Note more pin, as out1 to out4. The bare is out1 only. 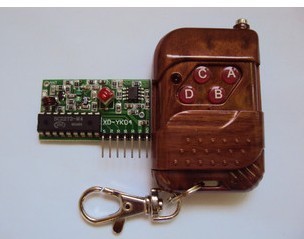 Not the answer you're looking for? Browse other questions tagged arduino rf 433mhz or ask your own question.