How much current is a powered-down ATtiny84 supposed to take?

I know this sounds like a stupid question, but I'm wondering if the datasheet has an error or something.

I have an ATtiny84 connected to my bench power supply set for 3 volts. It's fused for the internal 8 MHz RC oscillator and a divide-by-8 clock. No watchdog, no brown-out detector.

8 of the I/O pins are hooked to LED anodes, with the cathodes grounded through 0 ohm resistors (yes, the duty cycle is low. Fear not). One of them is connected to a button with the other side grounded. Two of them (shared with MOSI and SCK of the ISP) are not connected (other than to the ISP which is itself disconnected for this test).

The result is 240 µA of current draw. This is measured with a µCurrent Gold, so I have some confidence in the accuracy.

For reference, here's the actual sleep function used by the code (but not part of this test):

It yields the same current consumption, which is why I reduced this test down to just putting the chip to sleep in as little code as possible. 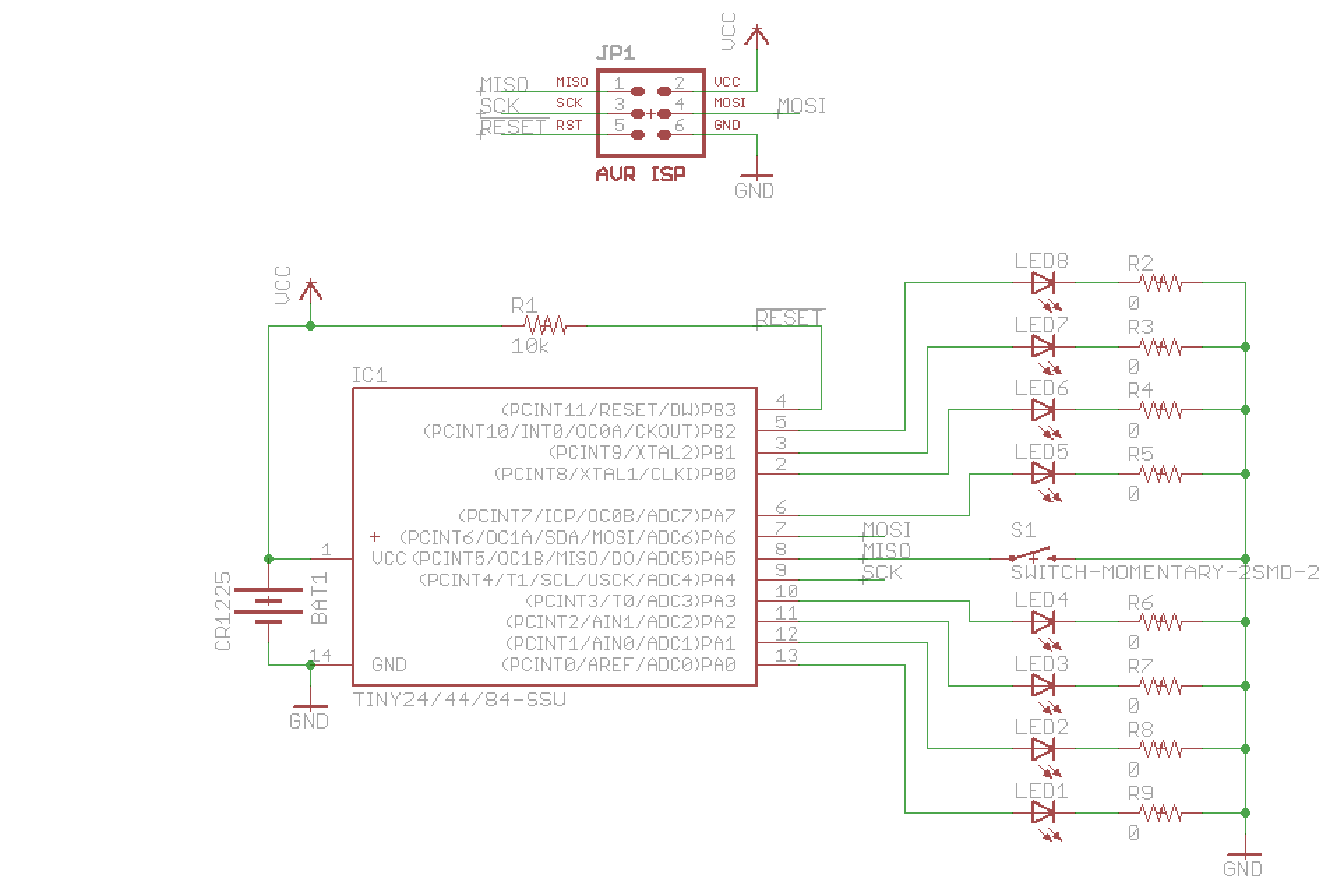 For this test, the battery is absent and 3.00 volts is being fed in to the Vcc and GND pins of the ISP header. No other ISP pins are connected.

I've repeated this experiment with an ATTiny85 on a breadboard. I programmed it with this:

I then fused it for a 1 MHz internal clock, and then disconnected everything but power and ground. The result: 240 µA.

Now, all of this would be explained if the graph in figure 22-11 (this is the ATTiny85 datasheet now) had the axis mislabeled and was actually in mA rather than µA. The power down current vs Vcc and temperature that I'm using lines right up with the graph 3 orders of magnitude higher.

Has anyone gotten an ATTiny to draw less than a micro-amp (other than just disconnecting power)? Can someone write a sketch that will make an ATTiny do nothing but just go permanently to sleep consuming as little power as possible with nothing connected except power and ground? That's what I've been trying to do, and there clearly is something that I'm missing and I'll be damned if I can figure out what it is.

This comment on reddit pointed me to this page, which says that clearing the ADEN bit in ADCSRA shed as many µA as are currently in excess in my test rigs. I am away from the lab right now, but when I get home tonight, that's the first thing I'll try. I'm optimistic. I do know that the ADEN bit gets set in init() in wiring.c...

If it's confirmed, then the lesson is that PRR is not enough to turn the ADC all the way off.

EDIT: It is confirmed. The one added caveat is that order matters. ADCSRA must be written before PRR.

Are you certain sleep_mode() is able to put everything into that 100nA power down mode?

A simple explanation is it does not go that deep.

As the sleep_mode() macro might cause race conditions in some situations, the individual steps of manipulating the sleep enable (SE) bit, and actually issuing the SLEEP instruction, are provided in the macros sleep_enable(), sleep_disable(), and sleep_cpu()much .

So they advise against using sleep_mode()

Even if sleep_mode() returns with an error, it is in a while(1) so it might just be going round and round.

and see if the LED is on. If you have an oscilloscope, have a look at the pin, and see what is happening.

Edit:
One approach would be to look at the ATTiny84 datasheet, and see which peripheral might be consuming that much current.

240µA is so big, it may be more than one cause; no single peripheral on the data sheet looks big enough to consume that much.

The internal I/O pin pull-up resitors could leak enough to reach that order of magnitude, so try to ensure they are all off.

This does not look like the proper sleep sequence to me...

Try this and report back.

Not the answer you're looking for? Browse other questions tagged current-measurement attiny sleep or ask your own question.

2
AVRISP mkII not reading device signature
6
Actual power consumtion of xbee series 2 in sleep/power down mode?
1
Program an ATTINY85 on the PCB is causing me some trouble
0
How can I verify my ATtiny25 programming? Seeing nothing on output pins
0
Troubleshooting PWM circuit
1
328p-pu drawing too much current in sleep mode
4
Amtel ATtiny EEPROM partially erased on power cycle
0
“Normally closed” switch: does it use more power than a “Normally open” for a low-power battery-powered ATtiny project?