Connect an ATmega328 to a Raspberry Pi

I've been stuck on this problem for a couple of months now and haven't had much luck finding the exact information that I need. So, I'm currently working on a project to make a handheld raspberry pi, and utilizing small push buttons to communicate with the Pi as a USB device or via GPIO pins as a keyboard. I'm not too worried about the code to translate a signal to a keystroke, but I'm not entirely sure on how to actually connect an ATmega328 to the Pi. I've looked around online and see people using an entire Arduino board to do what I'd like, but it needs to be able to stay compact, so I plan to send the code to the ATmega328 and directly connect it within the circuit. I don't have much experience with building circuits that communicate with computers, so any help would be greatly appreciated. 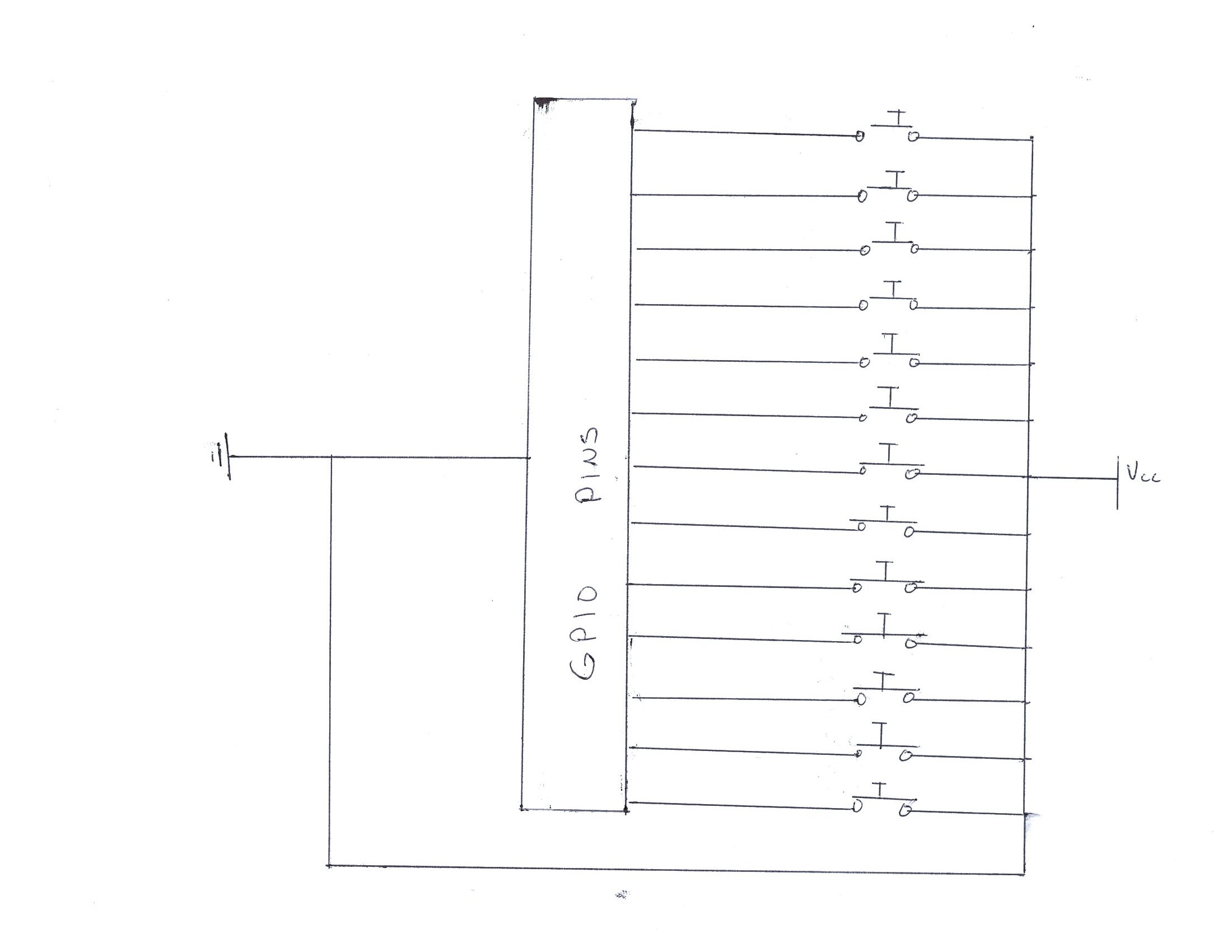 Here's an idea of the kind of circuit that I'm looking for. I'm not entirely sure on the exact layout, but this is sort of a rough sketch to give an idea of what I'm trying to accomplish.

There are several different parts to the project.

Reading pushbuttons on the R-Pi is doable. In some ways it is easier on an Arduino, (That sketch isn't how one would do it electrically, but that is straightforward to fix)

The problem is the emulators for the older games consoles. I have some experience supporting a team of students who wanted to run a games emulator on a R-Pi.

Each emulator will have some assumptions built-in about its games controllers. Some of the popular games console emulators already have controller emulators, which complete the hardware.

In some cases the games console emulator is straightforward to complete by building some hardware that emulates the specific games controller used by that console.

AFAICT you need to identify each game console. Then you either buy the controller hardware, or build the games controller to satisfy the console emulator, or you need to hack on the emulator source code.

IIRC the games controller the students needed to make was straightforward. Information about the controller was available on the web. The electronic interface between the RPi console emulator and the controller wasn't very complex. They built it with an Arduino, and it worked well enough for them to be satisfied.

Overview:
Exactly what you need to build for the controller mostly depends on the games console emulator you want to use. Until you decide on that, there is very little value in focusing on connecting buttons. The problem is to make a games controller which has the right electrical behaviour to work with the emulator.

You need to choose the games console emulator (or emulators) first. Then research the controllers. There is little benefit working on the pushbuttons before that; pushbuttons are relatively easy to wire up. The much harder part is building an interface between the games console emulator and the controller because you don't have free choice on how that works; the games emulator is already made to work in specific ways.

Summary: A few controllers might be built using an ATmega328, because it implements enough of the hardware interface. However, for other controllers it is the wrong place to start.

Recommendation: Pick the games console emulator with the games you most want to play, and research how it talks to its specific games controllers. Ideally find some instructions on how to build a working games controller for that emulator. Learn how it works by follow the instructions and build it. If it is far away from your goal, build it as quickly and cheaply as you can, and treat this as a learning project.

Once you have got something working, you will understand much more about the possibilities and constraints. So you will be better equipped to do what you want to do.

My vote is for directly attaching the buttons to the Raspberry Pi. Linux GPIO is extremely straightforward to access from userland (even a shell script can access GPIO!).

Having said that, if you want to use the buttons to control off-the-shelf programs (that probably expect input from a keyboard/mouse), you'll need to generate Linux event keypresses from GPIO events. Luckily, Linux has the gpio-keys driver. Something like this in your DTS file will do the trick:

You may have to configure pin muxing depending on the default state of the pins out of reset.

Not the answer you're looking for? Browse other questions tagged usb atmega raspberry-pi gpio or ask your own question.