What are those small metal bars going across a PCB for?

In quite a lot of PCBs that I have seen, they often have these small metal bars going across from one point to another.

Here is an image of what I am talking about. In this example it is a charger: 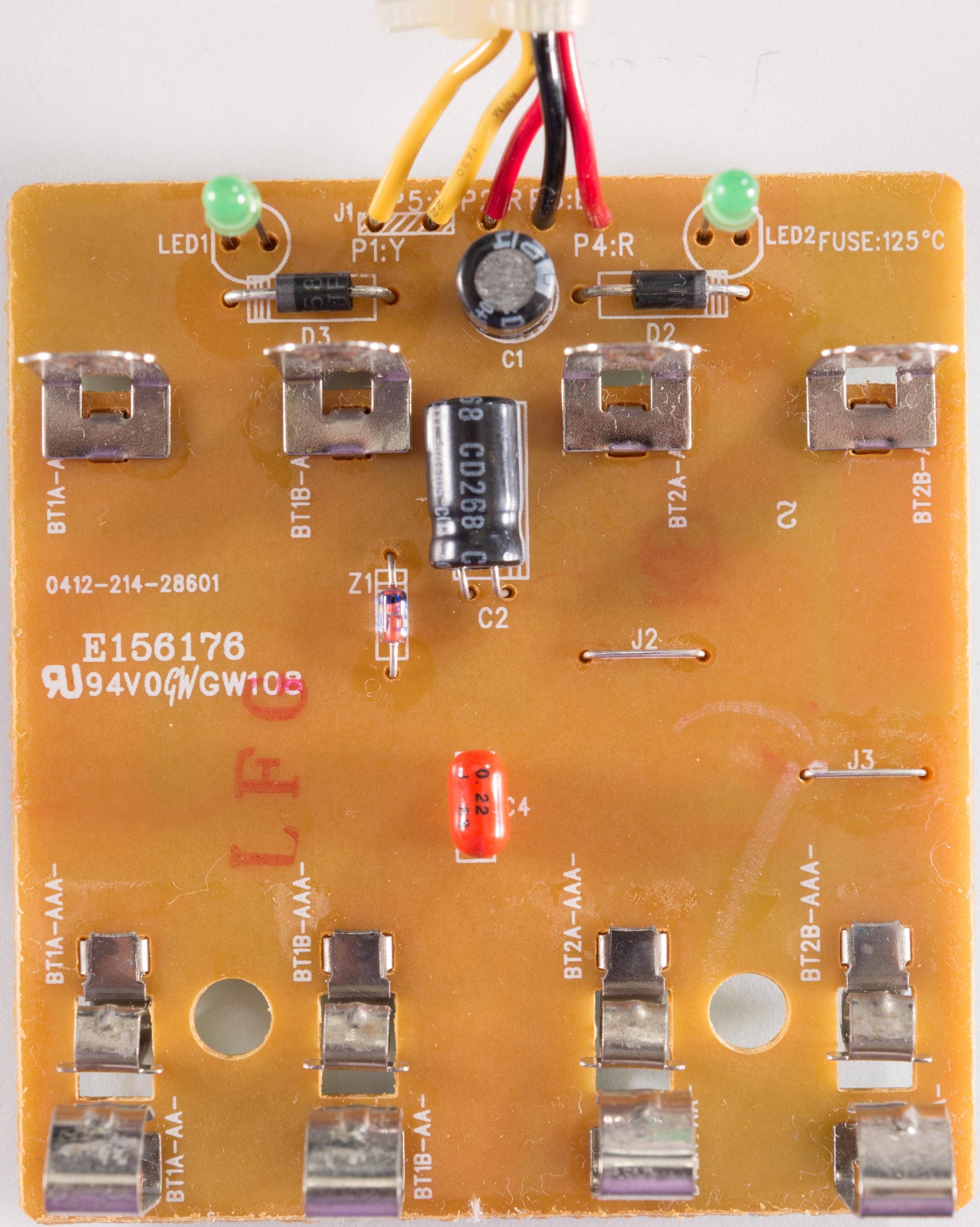 J2 and J3 are what I am talking about

For reference, here is the other side of the PCB: 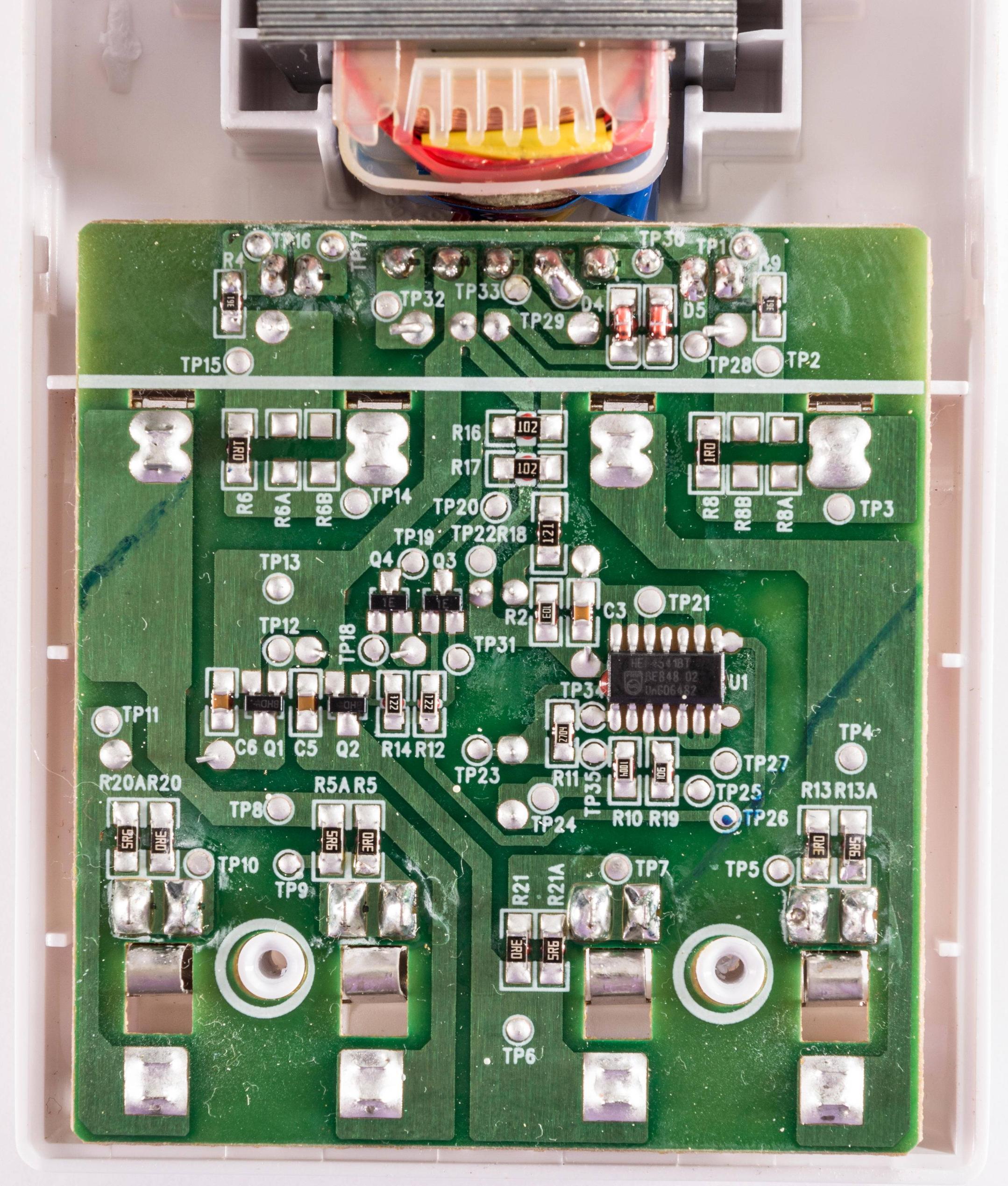 These are called "jumpers" or "jumper wires" and simply connect two parts of the PCB together. They are common for single-sided PCBs to make a connection that may not be routable. The alternative would be to have a double-sided PCB, but that would be more expensive.

In addition to the direct answer already given by others, I want to point out that this is a different circuit board construction optimized for high volume. What you probably think of as normal PCBs are at least two layer, and the copper is etched and plated with the holes drilled and the outside shape of the board routed.

These boards are different, in that the whole board is punched with a custom die for the purpose. The single punching operation cuts the outside edges and any holes in the interior. The incremental cost per board is less than separately drilling and routing, but you have to pay for the custom die. That is why this technique is only used in high volumes where the cost of the die can be amortized over many boards, thereby being a small cost per board.

One telltale sign of such boards is the golden color of the material, which is phenolic instead of fiberglass because fiberglass doesn't punch well. Note also the lack of plating inside the holes. This process doesn't allow for plating the holes without extra steps that would negate the cost savings. Since everything can't be routed in a single plane, somehow connections need to be made out of the plane. Because the holes aren't plated, there can't be vias, and there is nothing on the other side for the vias to connect to if they did exist. The answer is to insert short wires on the top side that are jumpers. Note the designators start with "J", which stands for "jumper".

This is the cheapest way to make PC boards in high volume, but there are problems. The reliability is not so good, especially in a high vibration environment. Thru hole leads are only held by the solder meniscus on the other side of the board, not inside the hole and on both sides like a plated board. This means the joints are weak, especially when subjected to pushing forces from the top of a thru hole component.

Despite that, I've seen this type of board used in the dashboard of a car. A while ago I had a Dodge Neon, and the speedometer started acting flaky after about 100,000 miles. There were thru hole vertical mount connectors on the board, and over time the solder meniscus around the pins cracked so that contact was intermittent. You had to look with a jeweler's loupe or microscope to see it, but the effect was real. I took the board out, reflowed all the solder joints and added more solder, after which the dashboard worked again. I don't know how much Chrysler saved per board, but it couldn't have been all that much, probably less than a dollar. However, they were willing to give up reliability in return for that dollar.

"Link" or "jumper (wire)". The PCB design engineer wasn't able to route the copper traces on the rear side to connect to all required places on the board so (s)he put in a couple "bridge wires".

Sometimes they double as an easily accessible test points or to set a specific circuit configuration (eg. a different voltage or current).

Why not "wire"? Well these are regular wires. Are you thinking about insulated wires? Do realize that insulated wires need to be prepared in exactly the right size, which is more effort and more expensive.

In this specific case they are implemented as a bare piece of wire, but sometimes 0 (zero) ohm resistors are used. These look like a regular "pin through hole" resistor, but have only one single black band. The advantage of 0 ohm resistors over wires is that they are easier to handle for pick-and-place machines.

Not the answer you're looking for? Browse other questions tagged pcb identification or ask your own question.

15
What are those wire terminals that mate with standard header pins?
28
What are the advantages and disadvantages of thinner PCB thickness (<1.6 mm or 0.063'')?
10
Is it ok to use the PCB as part of the structure of a product?
5
What are these metal plates covering parts of PCBs called?
13
Why print a PCB module on ceramic?
1
Perpendicular tracks in 2 different layers (PCB)
4
PCB design of the 80s (Arcade PCBs) - Ground/Power tracks
1
Where is the best place to tap into this broken USB flash drive with a new cable?
16
Why do some PCBs have exposed plated perimeters?