Using an SPST knife switch to power on/off a PC

The title is it in a nutshell

I've got an antique knife switch that I'd like to use to power up (and down) an embedded PC.

The PC power switch is essentially two wires, a ground and +5v (measured with a voltmeter). Normally, a momentary pushbutton is used. You press it for a short time and the PC powers up. Press and hold while the PC is on and it powers down.

I'd like to use a knife switch, so the action would be

I've found a simple circuit with a 5v reed relay and a 470uf capacitor that could work.

I was really hoping to only connect the circuit to the PC's power switch wires, and not require a separate power supply line.

EDIT I don't believe I can add images to the comments so I'm adding the circuit I mention below here. I was mistaken about the 2 capacitors though. It's two relays to control 2 separate buttons, one for the engagement of the toggle, and one for the disengagement.

I originally thought I could use something like this, till I realized I'd have to run a completely separate power (and possibly ground) line for it.

I +could+ run the additional lines. I'm really just wondering if the circuit I'm describing is even possible. It seems like it should be, but my EE background is pretty limited.

I was really hoping to only connect the circuit to the PC's power switch wires, and not require a separate power supply line.

Converting a toggle or latching switch, into a momentary output, typically requires some active parts, like logic ICs, a 555/556 timer, a microcontroller or dedicated IC.

Your capacitor + relay circuit is one of the simpler methods, but the pulse will be equal length on both connect/disconnect of the knife switch.

A microcontroller with a simple interrupt code would be easy to setup for your requirements, and only need the microcontroller, a capacitor, and power.

Honestly though, you are already running two wires, one of which is either ground or VCC, a third wire would be trivial.

I love knife switches and I dislike solutions involving adding circuitry, so...

If you are willing to modify the switch subtly you could probably make it give out a momentary pulse as it is slid home - something as simple as putting some kapton tape or something insulating over or inside the contacts so that only the leading edge makes contact as it first touches the contact, and is then insulated once it is fully seated.

You could also cut, file, stamp or otherwise create a notch, dimple, dent or cutout in the contacts or knife (harder to reverse) to give a similar effect.

Going a stage further, you could put a momentary switch under some part of the mechanism, for example near the hinge point so that it gets pushed momentarily by a bump or something on the knife switch as it's moved from open to closed.

Adding a fairly minimal amount of components (1) you could use a small beam-break type opto-sensor where the knife cuts the beam, if there was a small hole or slot drilled in the knife it would give a momentary pulse as the knife broke the beam & then the hole allowed it back.

Thinking about it, since you are willing to modify the knife switch (not visibly) or electronics, you could do it, if you add a battery. Since the battery provides the power, no need for the extra cables. A slight variation to the Cap + Relay circuit by replacing it with a transistor or opto coupler (A led + light sensitive transistor really). 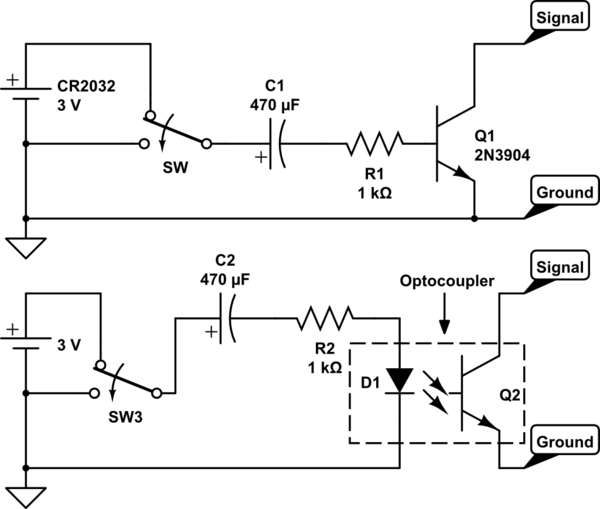 The first requires that one of the two wires of the power switch be ground.

The second does not. I am not sure if the second will work on both sides of the toggle switch, might require a second opto-coupler in parallel (with the led side reversed)

A coin battery, knife switch, and three smallish parts. Can be made the size of a dime with a smd capacitor.

Otherwise, with a SPST Knife Switch, you can go with a microcontroller, again, powered by the coin cell. 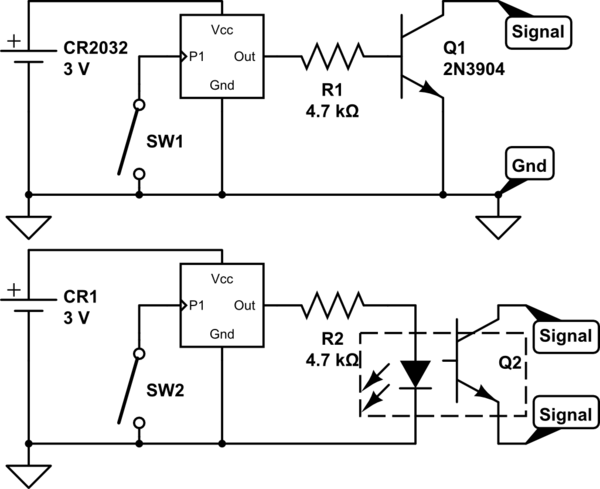 Internal pullup on the knife switch. Any microcontroller can work, and since all it does is listen for the switch then pulse for a second or two, battery life will be years.

Not the answer you're looking for? Browse other questions tagged switches toggle-switch or ask your own question.

2
Can I convert a toggle switch to momentary switch using a transistor and capacitor?

0
What kind of MOSFET use as a switch touch on, touch- off
1
Momentary to Toggle Switch for Tiny Application
0
Knife Blade On/Off Switch for an A/C circuit
2
Power & Reset in momentary switch in analog circuit
0
Need a Switch that Stays Off Once Power is Out
0
Using 1 momentary switch to toggle between two latched states. Plus relay question
0
How do I turn on a device with one momentary switch and off with another
0
Controlling an Array of Motors
0
A regular on / off switch AND a momentary one
1
How to constantly power an LED circuit normally controlled with a momentary switch?