RGB LED strip, powered by an ATX PSU and controlled by PWM, makes my speakers buzz with Arduino connected by USB

I've not much idea about electronics, but I managed to do some little projects in the past. Now I'd like to place some RGB LEDs in my desktop PC windowed case. For that, I bought a 5050 SMD strip with 300 RGB LED's (5 meters). Now I want to control it with an Arduino Uno.

I followed these two tutorials:

I'm using IRFZ44N MOSFETs, as shown in the first tutorial. The LED strip is being powered with 12V from an ATX PSU (not the one in my computer). I want to power (and send serial data to) the Arduino board by using an USB cable connected to the computer.

Everything is working, but my problem is that I get noise into my speakers (monitor built-in) when:

I saw very few similar cases on internet. They speak about capacitors and inductors, but I can't get what and where should I be adding to my project.

Update: It tried by powering my LEDs with a wall AC adapter at 9V and 12V and the noise disappeared. But I still need to know how to remove the noise when using a computer ATX PSU like this: 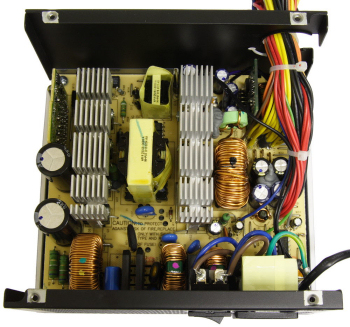 Please use an opto-isolated device to trigger or replace the FETs and share your results.

This will isolate the (ATX1 + FET + LED) circuit from the (ATX2 + Arduino + speakers) circuit.

Edit:
The power supplies are SMPS operating at different frequencies. You have tied their grounds together and are grounding signals from one through the other. The speakers' V- (ATX1 + ATX2) is fluctuating at a different frequency than its V+ (ATX2 only) so, you hear noise. You may have overlooked that the monitor is grounded through it's own power cable and ATX2 (via the video cable).

It sounds like your audio cables are carrying the PWM frequency to the monitor/speakers. This could be confirmed if you speed up or slow down the pwm frequency in the arduino and see if the "tone" you hear coming from the speakers gets lower or higher in pitch.

You mention that the audio cable carries your projects GND? I don't quite understand what you mean but if you mean your project shares a common ground with your audio signal that could definitely be the disturbance.

Start by trying to power the arduino through different USB ports. If that doesn't fix it, try and power the Arduino with something else like a phone charger so that your LED project is completely isolated from the computer.

you can use a Audio isolator that will solve the issue on your speakers. you can get them quite cheap as breakoutboards

Not the answer you're looking for? Browse other questions tagged arduino mosfet pwm inductance led-strip or ask your own question.