What is output impedance of a pin?

When a datasheet mentions the output impedance of a pin so and so ohms. What exactly does it mean? Can anybody explain through a diagram how does it look like? 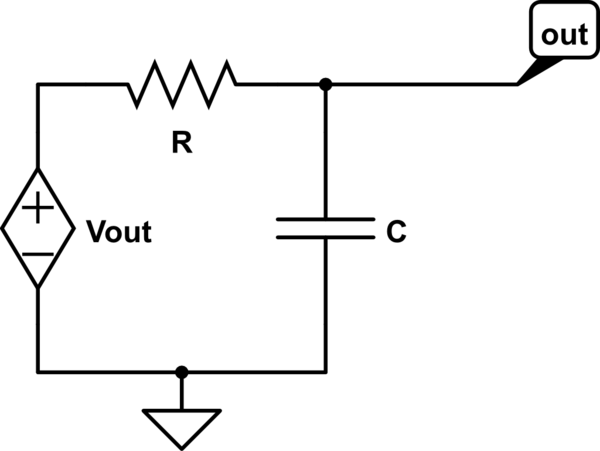 So what's this C about? That's another parasitic component, it comes from traces on the Silicon die, parasitic transistors capacitance and so on. The capacitor is important because it limits the speed of your pin, so it's a dynamic parameter, while the output resistance is a static one. As you can see the RC components form a first order low pass filter: the higher the C, the lower the corner frequency \$f_C=\dfrac{1}{2\pi R C}\$, the lower the maximum speed you can toggle your pin while keeping a clean wave.

I added the C part since you speak of the output impedance, that should include the capacitor. What you find in datasheets is usually the output resistance (\$\Omega\$) and the output capacitance (F) as separate values.

Simplified, its just the internal resistance of the output. An equivalent circuit would be just a resistor in series with the sourcing output pin.

Any non-ideal source has some (parasitic/unwanted) internal resistance due to the physical layout of the source. In general it needs to be low compared to the load, because with increasing current, the voltage drop on the internal resistance increases and thus, the output voltage decreases.

I keep talking about resistance but you asked about output impedance.

Reactance is the opposition of a circuit element to a change of electric current or voltage, due to its inductance or capacitance. Since the output behavior is not entirely resistive, we talk about "output impedance".

I fear that the answer is not as simple as one might like, but here it is. I'll offer the technically correct answer first, then give a more comprehensible approximation.

In the jargon as you may know, output impedance is a complex, frequency-domain quantity; whereas output resistance is a real quantity, whether constant or variable over time. Notwithstanding, both impedance and resistance are measured in ohms and, colloquially, the two words are often used as synonyms. So much for the terminology.

Does that make sense? No? No, I agree: it does not make sense, unless you have had your brain warped by the likes of an electrical or mechanical engineering degree. So here is the easy version (which is still hard enough): Suppose a pin with an output impedance of 100 ohms. Suppose also that this pin is supplying 3 milliamps to whatever device you have connected to the pin. Now suppose that your device starts demanding 5 milliamps through the pin, an increase of 2 milliamps. In this case, the voltage on the pin will drop by (100 ohms)(2 milliamps) = 0.2 volts.

If that's too much of a drop, if you wanted your voltage to remain steadier than that, then you need a chip whose relevant pin is characterized by a lower output impedance.

Does that make sense? Still no? Then here it is: output impedance quantifies the ability of a microchip or other piece of electronics/electrics to supply electric current on demand. The electrical outlet on your wall is good at supplying current, and its output impedance is low. A paper clip held in my hand is poor at supplying current, and its output impedance is high. If you draw more current from a microchip, piece of electronics or electrical outlet than it is designed to supply, if you overload it, then its voltage must start dropping, in protest as it were; just as if you burden the end of a cantilevered beam too heavily, if you overload it, it must flex and its end must start drooping, in protest as it were. In this sense, a pin with low output impedance is like a sturdy beam: it holds up under load.

There is admittedly rather more to it than this. For example, in an instrumentation current loop, output admittance instead plays the role described, which is confusing. Also, fuses and circuit breakers will often cut off the current entirely when too much is demanded, which seems like it would have something to do with your question but really does not. But so much will do to go on with, and should give you a general feel for the problem.

Let me start by saying that an output pin (or input pin), by itself, has no impedance. If this was already clear to you, then you know that it has to be between two pins. It just so happens that the other "pin" is ground. So whenever the impedance of a pin is mentioned, it is commonly known/understood that it is with respect to ground.
What the "impedance specification" means, is simply, if you were to take an impedance measurement of the pin to ground, you would obtain the value given. However, since impedance depends on the frequency used to determine its value, a frequency must also be specified. If a frequency is not specified, then they are referring only to its resistance and this is the value you obtain if you connect an ohmmeter between the pin and ground.
The diagram provided by Vladimir is the exact model.