Can I control multiple stepper motor drivers from one controller?

I need to drive 6 stepper motors in open loop with 1/4 microstepping. The application requires all 6 motors to move by the same number of steps at the same time.

There are no sensors of any kind on these stepper motors. They are homed by commanding the maximum number of possible steps in order to run the actuators up against a stop. Therefore I don't need any feedback on the control side.

Can I use a single-axis stepper controller to control 6 drives in parallel?

The diagram below shows 3 parallel drives and one controller, in the configuration I would like to use: 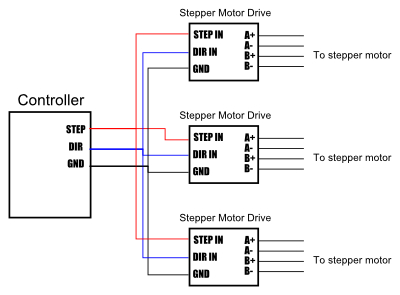 Utilizing six motor drivers for six motors is nothing unusual. As long as your controller output pins have a fanout of greater than six, you will be fine. This means that one output pin can drive six or more input pins of other ICs. If the fanout is lower (unlikely in my opinion), just use a buffer IC (e.g. 7406) to increase the fanout.

The alternative is, as Dave Tweed has already suggested, to use less drivers and hook up some or all motors in parallel. Obviously you should make sure the driver is capable of delivering the current. Further, only use identical motors in that setup, and don't use smoother steps than the proposed 1/4. The finer your microsteps become, the higher the probability that they will get out of sync. Also note that if one motor stalls, the other ones have less torque. If five stall, the last one might have to little torque left to even make a step. This will require balancing between motor type, driver, and how many motors per driver. You'll also want to use "dumb" drivers, like the DRV8812, which don't provide stall detection and tricky feedback-dependent things.

I personally don't recommend the last option. One fat driver can come close in price to six smaller drivers, so the saving won't be too impressive.

In both situations, care must be taken if the stepper shafts are connected mechanically. Even within one stepper series, you will get 5% step inaccuracy, leading to higher current drain than when not coupled and idle. They basically tug on each other because they don't perfectly agree on where the step center is.

I'm just thinking about whether it might be better to hook the steppers up in series (per-coil). Since most stepper drivers use current sources, that should allow the steppers to hold lockstep even for smoother microsteps. And it would solve the reduced torque problem when some motors stall. You'll need higher voltage rating for the driver then.

When running motors in parallel, you may have overcurrent problems that can damage your motors if you are pushing the limits of what your motors can do and then one of the connections for a single motor disconnects. This will put higher current on the other motors. Wiring in a series is safer in this case because all the motors would just stop functioning without damage to any of them. Another method of accomplishing your simplification of running six motor controllers with one computer is to use I2C motor drivers. They use a common 4 wire bus. This bus can be daisy chained connections and the controllers will all drive their individual motors in the same manner, from the same command, if they all have the same address. Even if they all have different I2C addresses, the timing is so fast, there will be no noticeable difference in each one being commanded sequentially. This also gives the flexibility of commanding them individually with different movements if desired without changing the wiring. The simple 4 wire buss is easy and requires only one I2C port with daisy chaining. If each motor controller must have a separate wire set from the processor, then a simple I2C bus expander will inexpensively give you the connections that you need.

Not the answer you're looking for? Browse other questions tagged driver stepper-motor parallel or ask your own question.