I have designed and built a small solenoid and... it doesn't exert any force on the steel bolt I am using as a plunger. I could freely move the plunger back and forth without any resistance.

I put the values into this calculator: http://www.daycounter.com/Calculators/Magnets/Solenoid-Force-Calculator.phtml

Clearly I have done something fundamentally wrong, but what?

Could it be the steel bolt?

I've looked for an iron substitute but couldn't find anything except old nails with a large taper.

What would happen if I tried a 3mm diameter neodymium magnet?

If you sense the force is there (Luke?) but it is very weak, then keep in mind that the calculator you used assumes the total gap around the magnetic path is 1mm. If that sounds impossible to you- consider the following images from here:

Or this one from the same site: 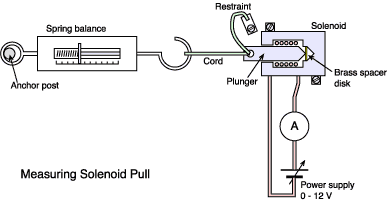 As you can see, the magnetic material of the core and armature forms a magnetic path that is only interrupted by a single small air gap (not counting the minimal clearance gaps required for the armature to pivot in the first image or the plunger to slide in the second image). The total reluctance around the path adds like electrical resistance, but the reluctance of the ferromagnetic materials is much lower than air, so the air gaps dominate.

Could it be the steel bolt?

That would be my guess. If the bolt is stainless steel then it may not be very magnetic. See if your Neodymium magnetic is attracted to the steel bolt.

Not the answer you're looking for? Browse other questions tagged electromagnetism solenoid actuator or ask your own question.