at the moment I am planning my first real (big) electronics project. I want to build a LED lamp, that can be controlled by a RaspberryPi (for e.g. programming a binary clock or changing the brightness according time of day). I built this schematic for the project (also at the end of the question as a image, as this is a .pdf).

There are two main problems giving me headaches:

so, yeah, I would greatly appreciate it if someone has any ideas for these two issues

as a little more information here is a "blueprint" like drawing of the lamp :D 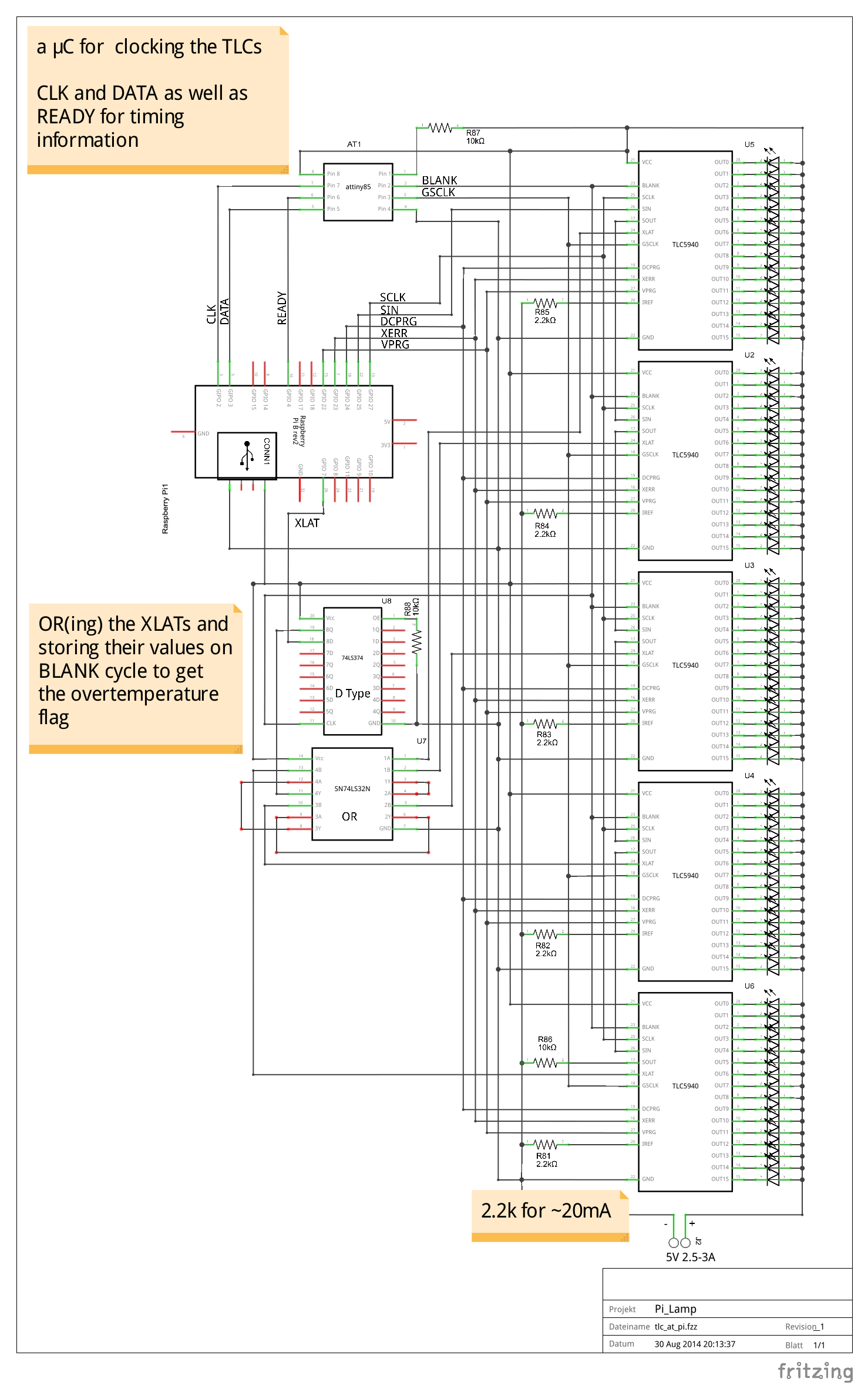 EDIT: Just noticed I confused the XLAT and XERR ... I want to read the error flags and have an output to the latches, not the other way around. I'll leave as it is for the time being though

So the idea is to drive the grayscale clock (GSCLK) from the ATtiny, and everything else from the R-Pi?

Driving the TLC5940 with two different sources does not look impossible to get working.

However it will likely create extra complexity. Debugging the source of an error may be very challenging. As this is your first major electronics project, I'd recommend making it easy to get working, and then make it better.

I think I might be somewhat concerned about using the R-Pi for such a complex timing-sensitive device too. (As you have identified, the interaction between the grayscale clock and blanking signals seems complex, though with experiments it might actually be simpler in practice)

However, if you already have one, I would try the R-Pi and see. Do this initially without using grayscale, as that removes the ATtiny's role, and so it will implement everything else. IIRC there is a simple PWM generator on a R-Pi. It takes a bit pattern, and shifts that out to produce some sort of square wave.

If the R-Pi wasn't good enough, or you haven't got one already, I would suggest a cheap Arduino Nano clone from one of the well-know shopping sites (not Arduino Mini, which is lacking USB, unless you already have a USB-to-serial converter).

The Arduino has enough pins to drive everything, so there is only one place to debug.

Programming an Arduino will be easier than an ATtiny, and there are lots more people who might help if you have problems.

Once the system is working, and if you are still determined to implement your original approach, you could still reverse back to your initial idea, using the Arduino to play the ATtiny's role. Once that works, swap out the Arduino, and use the ATtiny.

This might seem more complex than your original plan. However, being able to implement a project in smaller stages, and get each stage working, with debuggable pieces, can significantly reduce the time to complete everything.

Edit:
If low-cost is part of what interests you, and you plan to do several projects in this area, consider getting a USB-to-serial converter. Then you can use Arduino Mini clones, which are available for under £2/€2/$2.50. It would be pretty hard to make something using retail price ATtiny's and components at lower-cost. The mini is easier to program than an ATtiny, and has a lot more resources. Even if all you use it for is a square wave generator and a bit of logic, it is economical, flexible, quick-to-use and well supported.

If low-cost is part of the interest, I might look for something lower-cost than TL5940 (though they are surprisingly low-cost), and do some of its functions (e.g. grayscale) in the Arduino. However, try to keep the project easy to do in small steps.

I wouldn't use an R-Pi, unless there is more to the projects than you have described in your question.

Not the answer you're looking for? Browse other questions tagged led pwm raspberry-pi attiny timing or ask your own question.