Questions about the front end design of amplifier circuit

Recently, i'm working on a design which needs to design an INA front end. The most used circuit like this (please omit the component values): 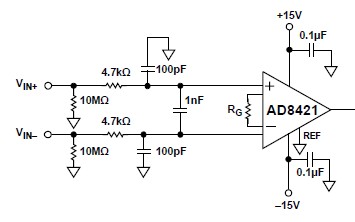 You see, the two 10M resistors which provide the path for biasing current are at the most front of the circuit. But occasionally, i saw designs like this: 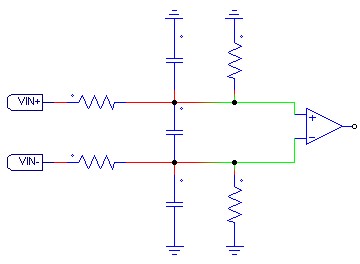 The 'biasing resistors' come to the back, just before the INA. Which one is right, or which one is better?

In ADI's application note: Designing Amplifier Circuits: How to Avoid Common Problems, they give a similar circuit: 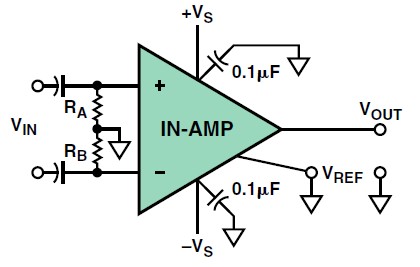 In these circuits, there will be a small offset-voltage error due to mismatches between the resistors and/or the input bias currents. To minimize such errors, a third resistor, about 1/10 th their value (but still large compared to the differential source resistance), can be connected between the two in-amp inputs (thus bridging both resistors).

They suggest to parallel a smaller resistor to bridge the unbalanced input. But why not reduce the value of the 'biasing' resistors directly. Are there any differences?

The third circuit is AC coupled. The resistors must be on the In-amp side of the capacitors otherwise they can't conduct the bias currents.

What's better depends on the application.

Not the answer you're looking for? Browse other questions tagged amplifier instrumentation-amplifier or ask your own question.

1
Short circuit protecting a class AB amplifier
2
Resistor on pin 3 of a Log Amplifier
9
Understanding the guarding circuit in an instrumentation amplifier
2
Why is my instrumentation amplifier railing with no inputs at its terminals and proper supply voltage?
7
Discrete transistors current feedback amplifier topologies
0
The circuit-level "why" of the loudspeaker / amplifier “POPP” sound
4
Building circuit to amplify small sensor signals using an Instrumentation Amplifier and 24-Bit ADC
0
how to increase output power of multistage audio amplifer?
1
How to design two circuits with Instrumentation Amplifier to produce the same output?
2
Tuned common emitter amplifier design