What is the difference between the substitution principle and Thevenin theorem?

The substitution principle (as seen in this book; in italian, sorry)

Let A and B be any two part of an electrical network with voltage and current sources and only resistances, connected by ideal conductors. Suppose the voltage between the conductors is v. Then, in order to study A, B can be replaced with an ideal generator of voltage v.

Any linear electrical network with voltage and current sources and only resistances can be replaced at terminals A-B by an equivalent voltage source Vth in series connection with an equivalent resistance Rth.

There must be something I do not understand.

It seems to me that these statements cannot be both true (or at least, the first one would imply the equivalent resistance in Thevenin's theorem to be zero, and so the theorem loses any meaning.)

Thank you all in advance for the answers!

As long as terminal voltage and current is same, accordance with substitution theorem, you can substitute whatever in the branch. Here is an example that demonstrate how it works. 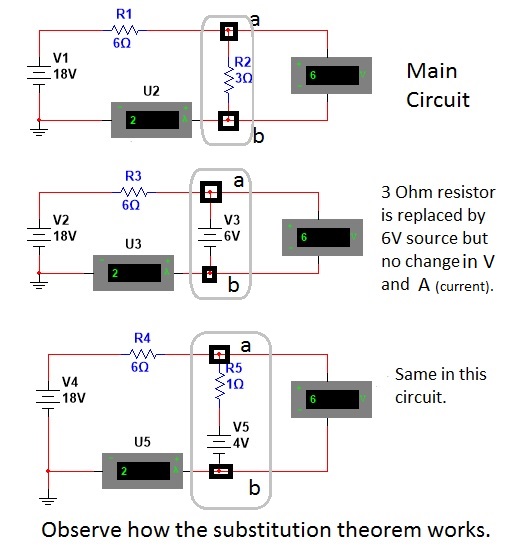 Any two-terminal dc network can be replaced by an equivalent circuit consisting solely of a voltage source and a series resistor.

Hello Ant: To answer your question, I think that both theorems have no direct connection.

The "substitution principle" as quoted by you is a special form of the "General Substitution Theorem" of network theory. This one of the less known network theorems which, however, is applied very often - mostly without knowing.

Here is the contents of the theorem: Any arbitrary branch Z of a time-invariant network can be replaced by an indpendent voltage or current source of the same value (branch voltage resp. current) without influencing other node voltages or branch currents - provided the network matrix has one singular solution only.

Example: Series connection of two transistor-based gain stages. The output voltage of the first stage (taking the input impedance of the 2nd stage into account) can be seen as a voltage source driving the 2nd stage. Thus, the output two-pole of the 1st stage is replaced by an ideal voltage source having the same voltage. This is allowed only because of the existence of the "Substitution Theorem".

This approach has nothing to do with Thevenin´s theorem.

EDIT: Of course, the substitution theorem applies for DC as well as AC circuits.

Not the answer you're looking for? Browse other questions tagged voltage resistance theory thevenin substitution or ask your own question.

0
Thevenin equivalent with dependent and independent generators
1
Parallel resistor not affecting rest of the circuit
0
Inconsistencies between my Nortons and Thevenins equivalent circuits
2
Choosing voltage divider resistor values
0
Finding Thevenin Equivalent voltage and resistance
0
When using Thevenin's Theorem, why is R_thev of resistors calculated in parallel, when original circuit had them in series?
3
Intuition on Thevenin's Theorem
0
Thevenin Voltage and Resistance Problem
0
Thevenin equivalent with multiple sources circuit