I've been looking at the Pierce oscillator and I'm unsure of the role played by the series caps to ground (the so-called pi network).

I've put together an image which attempts to explain my intuition (the 1's and 0's are a simplification; I understand that the crystal produces a sine wave). 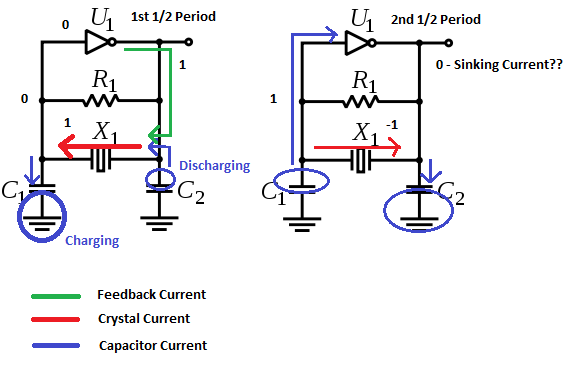 I assume the action of the crystal - oscillating back and forth - causes the caps to charge and discharge and, crucially, produce the 180 degree phase shift at the inverter input pin.

The feedback "kick" is produced every half-cycle in response to C1 charging and is in-phase with the crystals current movement during this period.

Incidentally, as I understand it, the large resistor R1 is designed to put the inverter in a highly sensitive state (hovering around Vcc/2) where the slightest tip either way produces a large output (relatively speaking) in the opposite direction. This is possible because an inverter output of Vcc could feed the input, in tiny increments though the feedback resistor, from 0 to just shy of Vcc/2 before it would "flip". Then, of course, it would draw current from the input and so on until finally it settled at a balancing point around Vcc/2.

Is that more-or-less how it is?

Without capacitors how can you expect the crystal to produce a phase shift of 180 degrees at its resonance. There needs to be 180 degrees of phase shift because you need a total of 360 degrees and the inverter provides only 180 degrees hence it's called an inverter.

If you want to read more try this - it's quite a good document on the subject by Microchip entitled AN826 Crystal oscillator basics.

Here is also a very good article about figuring out the series resonant point and the parallel resonant point (all xtals have them and this basically determines the capacitor values chosen.

"I understand that the crystal produces a sine wave"

No - a crystal is a pure passive part which cannot produce anything. The working principle is as follows:

Not the answer you're looking for? Browse other questions tagged capacitor oscillator crystal or ask your own question.