How can one organize SMT parts prior to/during PCB assembly? 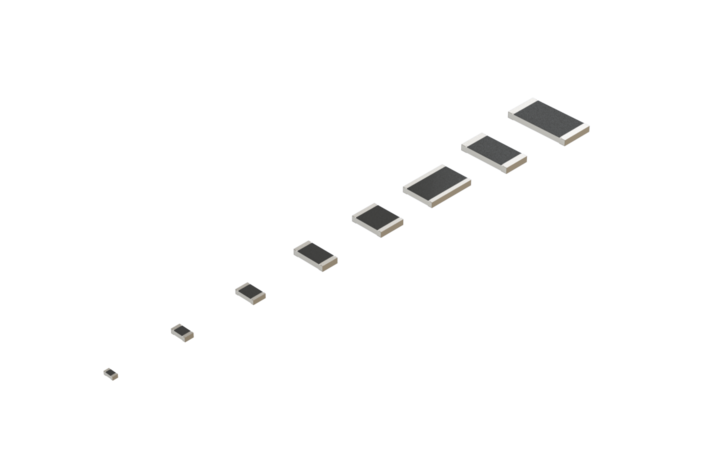 This means that having two different kinds of parts "out" at the same time is a serious problem. How might one keep small (<100) quantities of such parts properly organized during assembly? Are there particular tools? Storage devices? Methods?

You can find SMT parts storage bins on eBay, like this: 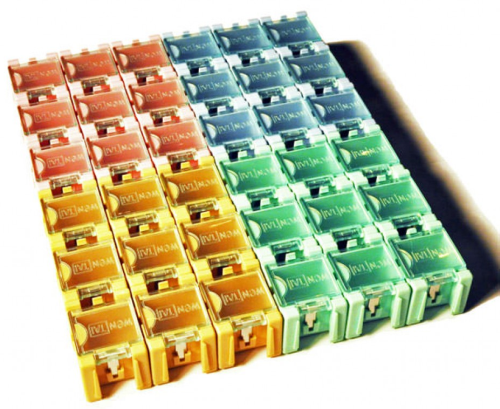 They can be opened with tweezers and closed very easily. I typically have a few "trays" of them, where one is for capacitors, one is for resistors, etc.

I've done several stints as a surface mount solderer, mostly on prototype and small (under 20) production runs, for a company involved in research. Most of the boards were data loggers, or interface/drivers (using mobile phones to both log data and turn on pumps etc.) I prefer hand soldering with flux core solder and a flux pen if needed, although using solder paste in a syringe is a good place to start, I just found I worked quicker without it.

It really comes down to what you find works best. My supervisor once made me spend a week putting all the parts into nice tackle boxes, but the boxes were numbered for a particular job, which meant still looking through multiple boxes for a single part and finding we were out of stock...

The method that worked best for me was to simply work with one ribbon of parts at a time. One of the jobs called for 40 sot-23 diodes per board (20 boards in the job) I found it was easier to leave them on the ribbon, and just pull out 10 at a time. Complete all the parts of one type on one board and then move onto the next board, then jump back to the first board for the next part. My supervisor used to go one step further and put one part down per board and then move on to the next board. It worked for him but I found it wasted a lot of time jumping between boards, especially if multiple parts were placed right next to each other.

I usually tin all the tabs on one side at once, take out the number of parts needed, place them down on the tinned pads one at a time, then move back to the first one with the solder and complete both the remaining connections, and fill up the original tinned pad. It's all a matter of technique.

While I certainly wouldn't suggest ever tipping the entire board's components into a single pile and having to work out which is which, after a while you do get a feel for the different parts; even two identical parts from different manufacturers will have a slightly different colour to them, or overall size may be slightly different. You tend to get a feel after a while if the part you have picked up is the right one, particularly when using the single ribbon method; the eye can pick out one different part fairly easy.

You didn't really specify if you are hand soldering, machine soldering, pick and placing with solder paste and an oven, etc.

You can use rotating bins: 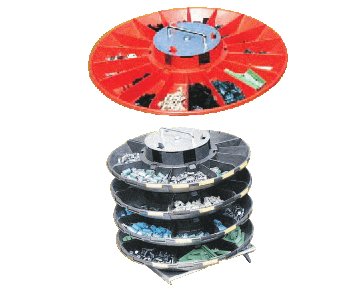 For smaller quantities you can use double sided tape and stick the component tape to the bench. Mike from mikeselectricstuff Youtube channel has a nice video showing this technique: Some random hints for quick hand SMD assembly.

As for the tools you can use a vacuum pickup tool. They come either as a hand operated pump (small button you press/depress to operate) or with external vacuum pump. They have various tips to fit the component.

I found that the various storage bins/drawers for SMT/SMD components aren't really practical. Sure, they look nice, but it's way too much work to put components in, and then take them out. When hand-assembling, I take components directly from tape strips, trays, bags or whatever they come in, and place them onto PCBs.

I work with only one component at a time, so I rarely have a problem of telling which part is which.

As for storage and retrieval, I mostly use small zip-loc bags with printed labels. These go into my storage boxes. I use PartsBox (https://partsbox.io/) to keep track of everything I have (disclaimer: I am the founder of PartsBox).

Components on cut tape in their zip-loc bags (the bags are 7x5cm): 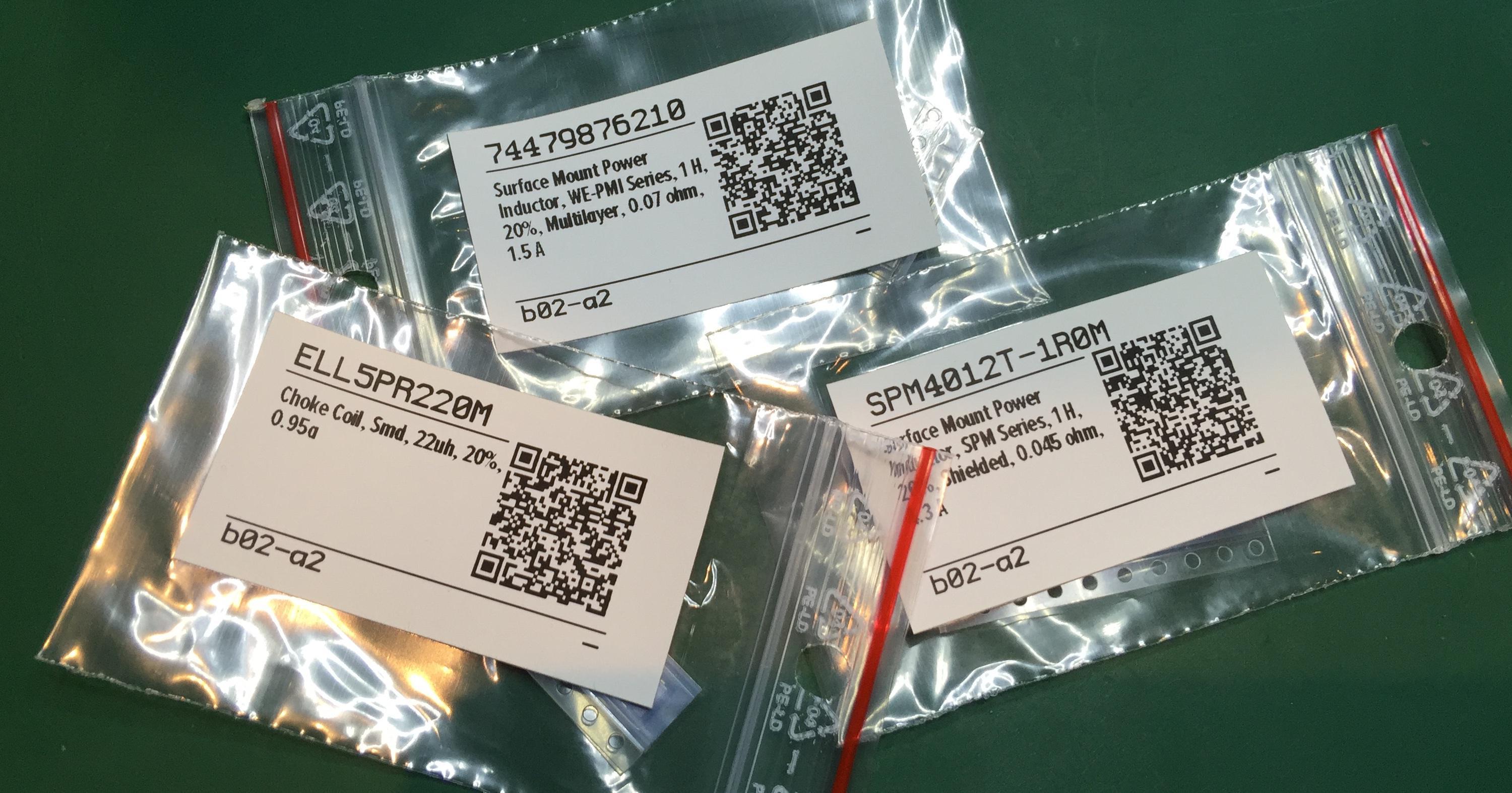 And this is how a typical storage box looks like (when searching for a part, PartsBox will point me to a specific drawer, like b01-c1): 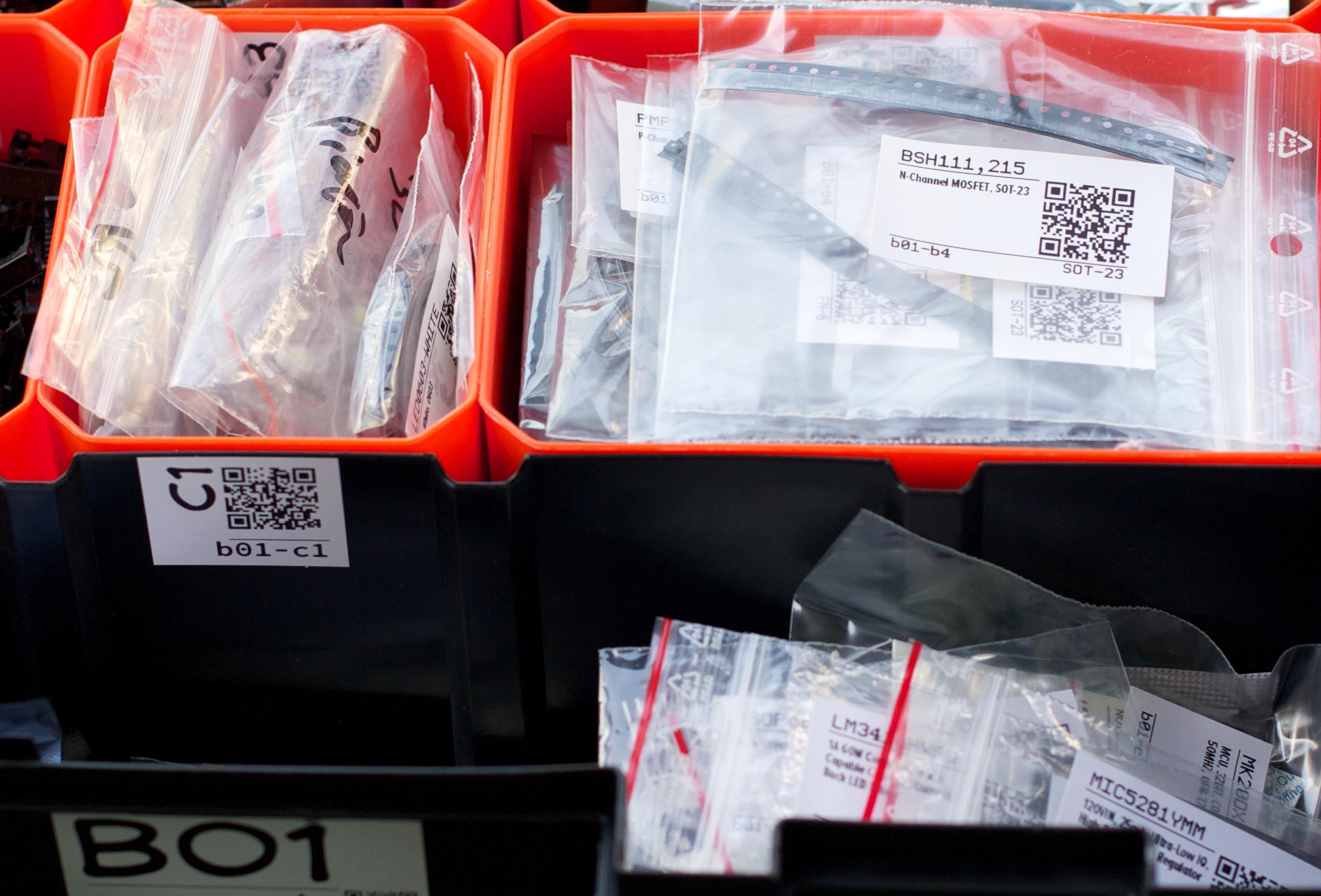 If anyone is interested in more details, I also wrote a more extensive article about how I store electronic parts: https://partsbox.io/blog/how-to-organize-electronic-parts-04-2017.html

Not the answer you're looking for? Browse other questions tagged components surface-mount or ask your own question.

13
How do I make a Polypropylene box static resistant?

6
An idea for well-aligned component placement during PCB assembly
14
How can I indicate pin 1 on a SMT package footprint without silkscreen
3
How to find SMT equivalents of TH parts?
6
Export restrictions when sourcing parts for PCB assembly in foreign country
1
How can I tell whether an SMT/SMD Capacitor is oriented with plates horizontal or vertical?
0
What is a DC block and how can I put this on a PCB?