How should I connect AGND and DGND

The highlighted part on the left figure shows the analog ground and the right one highlights the digital ground for the same circuit. The component on the right side is a 80 pin MCU with 3 sigma-delta ADC converter.

Is it better to

P.S. as I read the aim is to prevent DGND to disturb the AGND, I defined main ground-plane as AGND

Combining digital and analog grounds is quite a contentious issue, and is might well fire up a debate/argument. A lot of it depends on whether your background is analog, digital, RF etc. Here is some comments based on my experience and knowledge, which is likely to differ from other peoples (I am mostly digital/mixed signal)

It really depends on what kind of frequencies you are running at (digital I/O and analog signals). Any work on combining/separate grounds will be a work in compromise - the higher the frequencies you are operating at, the less you can tolerate inductance in your ground return paths, and the more relevant ringing will be (a PCB that oscillates at 5GHz is irrelevant if it measures signals at 100Khz). Your main aim by separating grounds is to keep noisy return current loops away from sensitive ones. You can do these one of several ways:

A fairly common, but quite drastic approach is to keep all digital/analog grounds separate for as long as possible and connect them together at one point only. On your example PCB, you would track in digital ground separately and join them at the power feed most likely (power connector or regulator). The problem with this is when your digital needs to interact with your analog, the return path for that current is half across the board and back again. If it's noisy, you undo a lot of the work in separating loops and you make a loop area to broadcast EMI across the board. You also add inductance to the ground return path which can cause board ringing.

A more cautious and balanced approach to the first one, you have a solid ground plane, but try to fence in noisy return paths with cut outs (make U shapes with no copper) to coax (but not force) return currents to take a specific path (away from sensitive ground loops). You are still increasing ground path inductance, but much less than with a star ground.

You accept that any sacrifice of the ground plane adds inductance, which is unacceptable. One solid ground plane serves all ground connections, with minimal inductance. If you're doing anything RF, this is pretty much the route you have to take. Physical separation by distance is the only thing you can use to reduce noise coupling.

A word about filtering

Sometimes people like to put a ferrite bead in connect to different ground planes together. Unless you're designing DC circuits, this is rarely effective - you're more likely to add massive inductance and a DC offset to your ground plane, and probably ringing.

Sometimes, you have nice circuits where analog and digital is separated very easily except at an A/D or D/A. In this case, you can have two planes with a line of separation that runs underneath the A/D IC. This is an ideal case, where you have good separation and no return currents crossing the ground planes (except inside the IC where it is very controlled).

NOTE: This post could do with some pictures, I'll have a look around and add them a bit later.

There has actually been a trend away from split ground planes and instead concentrating on placement separation AND consideration for the return current path.

Remember the key to a successful PCB layout is partitioning and the use of routing discipline, not the isolation of ground planes. It is almost always better to have only a single reference plane (ground) for your system.

(pasted from the below links for archiving)

In my experience, what worked best is to connect ground planes separated by an inductor. Even if the design does not provide a source of power only for analog signals, also insert an inductor in feed. 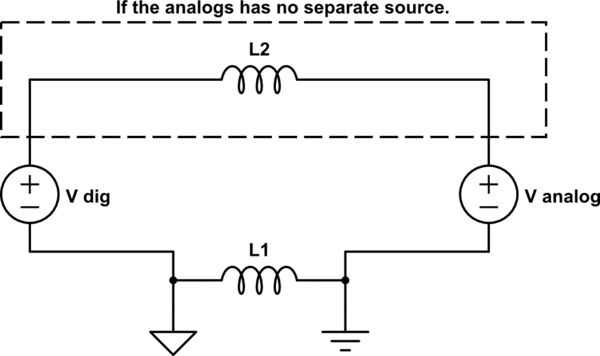 This type of arrangement has helped me improve the rejection of noise generated by digital circuitry.

Anyway, I think that the optimal design depends largely on the application.

Try to put your power supply/supplies in such a position on the PCB that the return paths do not cross. If this is impossible, then consider putting in an explicit ground return on another layer (emulating the "star" topology described by RocketMagnet) but be careful about signals which cross between the analogue & digital sections as RocketMagnet explained. A similar mechanism can be used when nearly all of the PCB is digital and there is only a requirement for a very small analogue ground area (or vice-versa). In this case I would consider having a digital ground and using a coper fill on another layer for the analogue ground (assuming you have sufficient layers). Consider how your layers stack up and put the copper fill on the closest layer to your analogue circuit. How you join the grounds will depend on how many signals cross between the analogue and digital domains and their speed, but generally try to join them at the point where the signals cross the domains whilst considering the return paths to the PSU.

Use plenty of decoupling (mix of values). By the way, the large areas of copper shown on the PCB above will do very little (except act as a heat-sink) because there does not appear to be any vias to allow return signals to cross the gaps on another layer. (Watch out that the PCB software does not remove "redundant" vias!)

Not the answer you're looking for? Browse other questions tagged pcb-design ground grounding or ask your own question.

19
How do you choose an inductor for connecting separate ground planes?
10
Grounding of ADC grounds
7
How on earth shall I design the ground planes for mixed signal circuits, split or not?
6
Why do TQFP and TFQN have different advice regarding analog ground?
2
AGND and DGND connection using flash ADC, totally stumped
3
Separate grounding for analog and digital portions of circuitry
2
Where should I connect power ground and control ground for a switched power regulator?
0
Correct way to ground components for solar panel measurement
1
How to create a mixed signal pcb
1
Confusion about GND and PGND
See more linked questions

5
How should I separate the DGND and AGND?
5
For Multiple ADC circuits PCB layout grounding, why is "single point ground" important?
0
analogue and digital ground connection
33
Should I really divide the ground plane into analog and digital parts?
5
Is it clever to put the AGND ground pour ONLY on the bottom layer and the DGND ground pour ONLY on top layer?
2
How to connect four different ground planes in the same PCB?
2
AGND and DGND connection using flash ADC, totally stumped
2
(Not) Impossible to separate AGND from DGND
1
Schematic representation of AGND and DGND in a shared ground plane design