NMOS: why VGS instead of VG?

I am having lots of trouble trying to understand how the mosfet is triggered. The text I read assumes the source of the NMOS connect to ground, while a positive voltage is applied at the gate.

where Qd is the charge density at the depletion region created by applying VG.

Now this is my question: WHY does the term VGS instead of VG? If, say the source is not grounded, but connect to something like 0.01v, then VGS is not equal to VG, and to overcome VTH (threshold voltage), I didn't see why we need to consider the source voltage To me, this doesn't make sense because repelling holes and creating the depletion region beneath the oxide layer has nothing to do with the voltage level at the source; only the gate voltage matters. Why VGS then?

Building on @Peter Bennett's answer, the voltage level at the source matters very much. The transistor, along with many other electrical components, could care less about the voltage level of an individual terminal. What matters is the relationship between the different terminals.

Similarly, if your body was at 1000V and you touched something else that was at 1000V volts, you wouldn't get shocked. Further still, any multimeter I've used has two test leads to measure voltage. If absolute voltage mattered, you would only need one of the leads to measure it. However, what really matters is the difference between voltages. The zero volt reference (Not ground. Reference or return are much better descriptions.) can be placed wherever you want.

I would understand this by recognizing that VGS is what allows charge carriers to enter the semiconductor channel. The gate charge is able to attract or repel charge carriers, but the source charge determines the amount of potential that's required to do so. If the source voltage is very low then there are more carriers available and it requires a lower gate charge to repel them and keep them out.

The substrate (body) is (almost always) connected to the source on discrete MOSFETs. See this diagram. 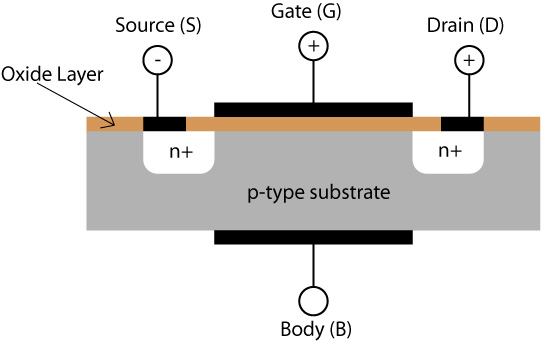 Not the answer you're looking for? Browse other questions tagged transistors cmos nmos or ask your own question.

19
Why MOSFET Pinchoff occurs
3
2 nmos in series
3
Why doesn't a capacitor connected to a MOSFET charge to VDD
1
NMOS: what exactly forms the inversion layer
0
Depletion Mosfet working as enhancement NMOS
0
NPN transistor circuit confusion
0
Pinch off in MOSFETs
2
Where do mobile electrons come from to form an Inversion Layer in an N-MOSFET?
1
In an nMOS, how does applying Vdd to the gate attract electrons forming a channel?
1
Describing the process of pinching off of a n channel in JFET