Why would clipping a wire cause a bomb to explode?

There are a lot of movies and video games that depict defusing bombs, most of which boils down to picking the right color wire. Something like this:

I'm not very familiar with circuitry and electrical engineering, but I assume this would be the place to ask it. I'm confused as to how clipping a wire would cause a bomb to explode. I assumed that if you clipped a wire, there'd be no connection from the switch to the bomb, so it wouldn't explode, but apparently, in a lot of movies as well, clipping the wrong wire leads to dangerous things.

Is this a realistic scenario? I really don't understand why clipping a wire would cause a bomb to explode. Rather, shouldn't it "defuse" the bomb?

There are plenty of ways of having an active open circuit. Below is just one simple example, using a single PNP transistor. 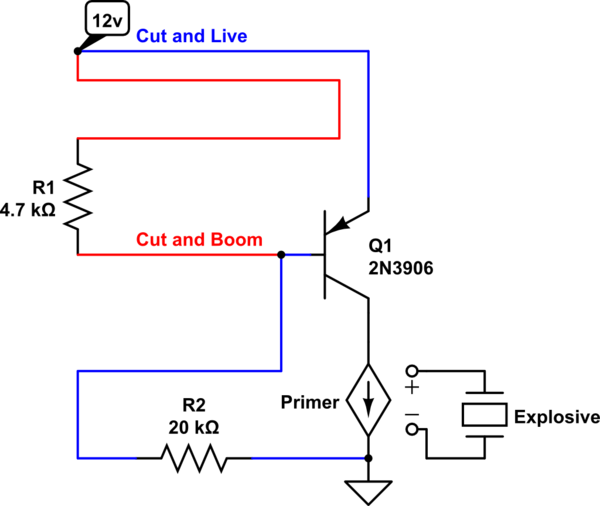 The Blue wire carries the power to the Primer/Explosive/Bomb. Current through the PNP is blocked by holding the base high through a resistor and the Red wire. Cut the Red wire and the PNP transistor's base is pulled low, allowing current through and GAME OVER MAN, you're dead. Cut the Blue wire, you are safe.\

Now multiply that by multiple wires, multiple transistors, or relays, or multiple paths, microcontrollers, False wires, etc, and that's how you get a realistic hollywood scene, logically speaking.

I suspect that there is an ISO standard that bomb makers follow. As evidence of this is the fact that in about 50% of the movies, there is a statement like "remember to clip the red wire and NOT the blue" or some similar statement. SO I suspect that embedded in the ISO document is a standard that indicates the standards for booby-trapping and which wires cause the bomb to explode and which cause the bomb to fail.

As you have identified, clipping the correct wire would stop a bomb exploding.

So, a bomb maker would ensure that there are many wires, so it isn't obvious which one to clip.

They would monitor whether a wire has been cut, and if it is, the bomb would explode. They are bomb makers, after all. They could also add more stuff to detect whether the bomb has been opened, etc.

Many people have lost their lives trying to defuse bombs, and the UK army disposal folks prefer to either completely destroy the detonation system, or just blow the whole thing up when one is found.

So I have always assumed it is somewhat realistic.

Of course, I don't believe anyone would put a cute little LCD displaying the countdown. Nor do I think they would use different colors for each wires, or maintain a consistent color code across a set of similar devices.

When I was in Afghanistan most bombs (IED's) followed a pattern for the area it was made in. A few bomb makers taught others to make them there way and they taught others and so on. Neatly colored wires were not common in the Pech. Most of the time they were wired so someone watching the bomb could detonate when a target got close. I have been on the receiving end of a few of these. No fancy display counting off time. Simply a enclosed container with a combustible hooked up to a battery wired to a cell phone. When the phone got a call, the electricity would flow through the wires creating a spark in the container with the combustible and expanding in a enclosed space forcing matter outwards—and boom. Now I'm a 100% disabled college student who can't lift a lot of weight, lost a lot of friends, and has trouble with steps.

The answer is hollywood logic.

Really, though. If you cut the power, it's dead. If you cut the detonator, it's dead. However, if you cut a wire that looks like the power wire, but is actually connected to some logic that detonates the bomb if it's cut, then it will go boom. If the bomb builder is clever with how the bomb is wired, then it will not be obvious which is the real power wire or the real detonator wire and which are the booby traps. I'm really not sure how realistic that scenario is, though. I don't think real-life bombs are ever defused the way you see in the movies. Which is probably why the bomb squad usually just clears the area and then blows them up.

In terms of how this can be done electrically, here are some examples:

1) The powered wire may be connected to a normally closed relay. so when power is removed, the relay disengages, causing the normally closed contact to close, setting off the bomb. This however is not a very good scheme if the bomb electronics are powered by a battery, since the continuously-powered relay would drain the battery.

2) The powered wire could be connected to the base of a BJT or the gate of a MOSFET, with a bias voltage set up so when the wire is cut, either the BJT or MOSFET switches on, setting off the bomb.

3) The powered wire is fed into the input of a microcontroller, with a pull-down resistor so the input won't be floating when the wire is cut. When the micro sees the input go to 0, then it sets off the bomb.

If the bomb detonator wire is active low, then cutting the wire could cause it to explode.

Note that there may only be one wire that would do this, only the detonator wire, and that a floating signal may not be enough to set the bomb off, but it is a conceivable scenario that cutting the right wire in the right system could cause a bomb to go off.

A typical will explode if you cut the power structure:

As far as I know, bombs usually have a heater device inside them, which increases the temperature around a tiny point to start the chain chemical reaction of explosion.

In the circuit above, when the power is on, - input voltage of the opamp is higher than the + input of it; thus the output of the opamp is low, and the MOSFET is turned off (i.e.; the heater is cold). If you cut the power, the 1000uF capacitor will still have enough energy in it to keep the circuit alive for a while and drive the heater. The - input voltage will drop lower than the + input voltage, which will make the opamp output high. The MOSFET will turn on and heater will heat the explosive.

I don't know the chemical background of bombs, but I think heating up a tiny point will be enough to start the chemical reactions. C1 and C2 are for noise immunity. C1 can have a smaller value to lower the R1C1 time constant though. A low power opamp will drain negligible current from the capacitor. So it is all up to designing the heater appropriately.

Normally, yes, a bomb wouldn't be able to explode after cutting the power. But that makes it easier to deactivate. They add a brownout detector circuit like this to detect if the power is cut and explode in case to make the things more dangerous.

However, the bombs like in those movies usually use a microcontroller with on chip brown out detection feature. So, they don't use a circuit like this. The microcontroller detects the drop down in the supply voltage and calls the brown out interrupt. That interrupt triggers the heater device.

There's lots of ways to make a circuit or mechanism that would always detonate the bomb unless a certain shutdown process was gone through.

If you charged something like a large capacitor or automotive ignition coil slowly and wired it to the detonator, cutting the power could induce a spark or other ignition, whereas a careful discharging of the device would render it safe.

It's similar thinking, design-wise, to "fail safe" devices but with a different end result.

Imagine detonator where electomagnet keeps firing pin in armed state. If you cut wire electromagnet release firing pin causing bomb to explode. So in this case you have to stop clock without disconnecting power to whole device to gain time to disarm da bomb completely or annihilate it in safe place

Fact of the matter is; when you have an explosive device like in the movies, they are in a normally closed circuit (like a home alarm system. Once the circuit is opened it releases what ever energy was stored in the system.

10
Why would a power cable need copper wire shielding?
5
What Would I Need Electrical Wire Testing Hooks For?
3
Checking materials (cheapest possible) to be used for a solar dark-detecting LED light bulb circuit
3
Why do you need a thicker wire when wire length increases?
0
Why is voltage higher at positive wire instead of negative wire in this example?
0
What would happen if a neutral wire and a hot wire were vastly different lengths?
0
Why does this 75C battery only have a 12 gauge wire on it?
5
Why does wire gauge go down as the physical wire size goes up?
0
Why might a thick wire be bad?