TRIAC turning on asymetrically by itself when it gets warm

I've got a simple triac phase angle controller which is very similar to the MOC3021 data sheet app circuit. Most of the time everything is fine. The circuit looks like this:

The triac is a BTA06-600B (ie standard sensitivity, not snubberless). The opto snubber circuit is the same, the triac snubber circuit has a 0.015uF cap and 270R resistor.

I've got a problem always occurs when the triac gets to about 75C - it turns on all by itself with a distored asymetrical waveform like below - turning on for part of one half of each cycle. This generates a waveform that the connected motor doesn't like at all - and it seems to stay there forever until the motor burns out. 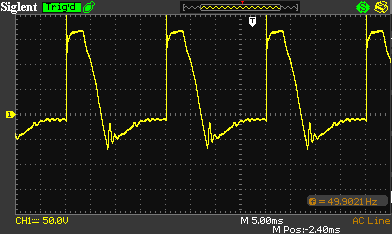 Once it cools down a bit it turns back off. The load doesn't seem to matter - it happens with a 30W fan or a 4A fan.

There is no gate drive - I've tried shorting out pins 1/2 on the Opto but it makes no difference. Also, when I heat up the triac the opto isn't getting warm - and I can cause the problem to appear with heat.

I can make the problem occur by heating the triac with a hot air gun though I don't think that is the only cause - it happened this morning a few times without much heat but we then spent hours trying to replicate the output with no success.

In the field this "other" cause is what is happening to some units - the triac shouldn't get to anywhere near 75C in normal operation as it is driving a 50W/0.22A fan and is mounted on a heatsink.

Why does the triac turn on by itself?

[update 1] It seems the problem is restricted to some triacs - I pulled some more units off the shelf and they were ok with the heatsink > 100C (110C according to my multimeter and sizzling hot according to my wet finger!). The one that worked was a different date code.

[update 2] The high temperature testing was done with a hot air gun not from the load/lack of heatsinking. In normal operation it is dissipating about 0.022W and is mounted on a heatsink. I've been hitting it with spray freeze & a hot air gun trying to make it misbehave.

[update 5] I know the 110C/etc temp is hot - perhaps too hot. My point with that comment is that even at that temperature some units are ok while at a temperature much lower than that others are not. The faulty one "fails" at something like 70C while the good ones are ok at 110C

[update 6] I have concluded that there is just something wrong with this particular triac - I've tried to replicate the problem with a heap of other units and can't. Asmyldof - it's not the spike causing the problem because the triac can be off, heated and then the problem occurs - ie the heating is causing the odd waveform, not any motor spikes.

I see two issues with what you're trying to achieve: 1. I assume you want to control the speed of the motor by adjusting the firing angle of the triac. AC motors do not respond well to lowering the RMS voltage applied to them which happens when you delay the firing angle. When a motor is operated at less than its rated voltage, it compensates by drawing more current to maintain its mechanical power output. I'm not surprised the motor burns out. If you want to control the speed of the motor, you need to use a variable speed drive which varies the frequency of AC to the motor. 2. The graph shows what looks like a spike at the leading edge of each waveform. If you expand the timebase, you'll likely see it better. Check its amplitude. The triac heats up because it's switching on/off every cycle. The more frequent the triac switches, the hotter it gets. It is during the switching transient from off to on or on to off that the triac consumes power, albeit for a short interval of time. When it fully on or fully off, it dissipates very little power. During these switching states from off to on, the motor delivers a voltage spike that likely exceeds the forward voltage of the triac and causes it to turn on despite the snubber network. If you exceed a triacs forward voltage it will turn on even without gate drive. The collapsing magnetic circuit of the motor is generating a voltage spike that retriggers the triac. I suspect the threshold lowers with rising temperature. I think the circuit will work OK for simply turning on or off the motor for long periods of time (when the triac's not constantly switching) but don't try using it to change motor speed by varying phase angle.

I think I've decided that I just have a faulty triac. I've tried to replicate the fault on many other units and cannot, no matter how hard I try.

Thanks everyone for your help - your comments made me think hard about what was going on.