If the depletion layer of a transistor collector/base junction is thick, why are majority carriers still collected?

In "Principles of transistor circuits, 8th edition" (top of p26) it is said that once holes have been injected in the base region by a forward biased base-emitter junction (which I understand) of a PNP transistor, they diffuse towards the collector and are then swept across.

However, I thought the collector-base junction was reverse biased which means that the electric field created by the external bias adds to the potential barrier? How is it that holes spontaneously cross this huge potential barrier?

Edit after the answers: After drawing a diagram it is much clearer. The potential barrier creates a field reinforced by the reverse bias, but that field goes against holes going towards the base - it's actually accelerating holes from the base to the collector. 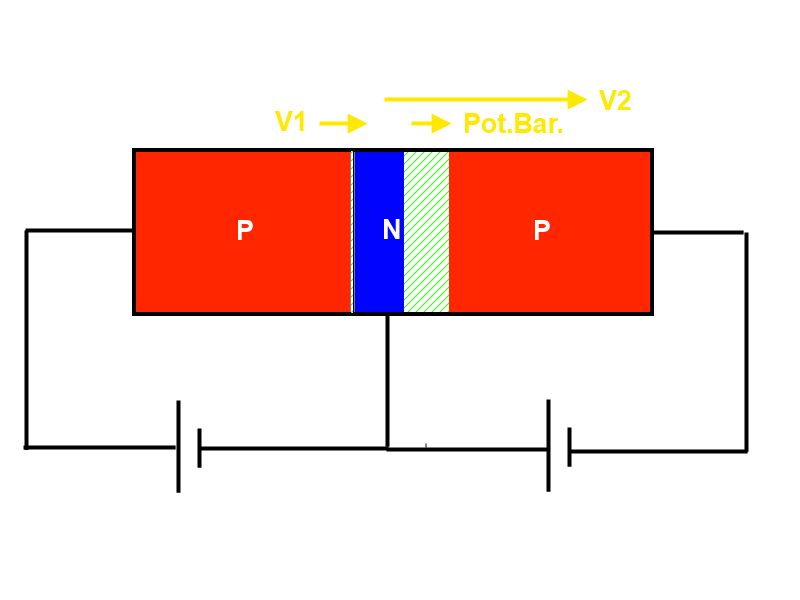 But in the N material of the base, holes are minority carriers and so, the built-in potential isn't a barrier at all. If a hole in the base exists long enough, it may be swept across the reverse biased base-collector junction by the electric field there and into the collector region.

When the base-emitter junction is 'on', lots of holes are injected into the thin and lightly doped base region so a large fraction of the injected holes exist long enough to 'slide down' the potential and into the collector region where they are majority carriers.

Not the answer you're looking for? Browse other questions tagged transistors npn semiconductors pnp or ask your own question.

0
Why is a DC base voltage needed to attain faithful amplification?

11
Why can current flow through the reverse biased base-collector junction (N-P junction) in a BJT with a forward biased base-emitter junction?
0
Why is the Collector current of a BJT transistor independent of the Collector Base voltage?
0
Current flow in a BJT transistor
0
Energy of electrons in npn transistor
0
Why do electrons cross the collector-base junction and does current flow between collector and emitter?
0
Qualitative explaination of Output Characteristic of Transistor (BJT) using Depletion layer between Collector and Base
0
BJT transistor, collector base junction
0
Why is the depletion layer near the emitter region narrower than the collector region?